the Southerner Online • May 8, 2020 • https://thesoutherneronline.com/76084/news/covid-19-economic-crisis-and-levels-of-unemployment-unprecedented-shocks-grady-community/ 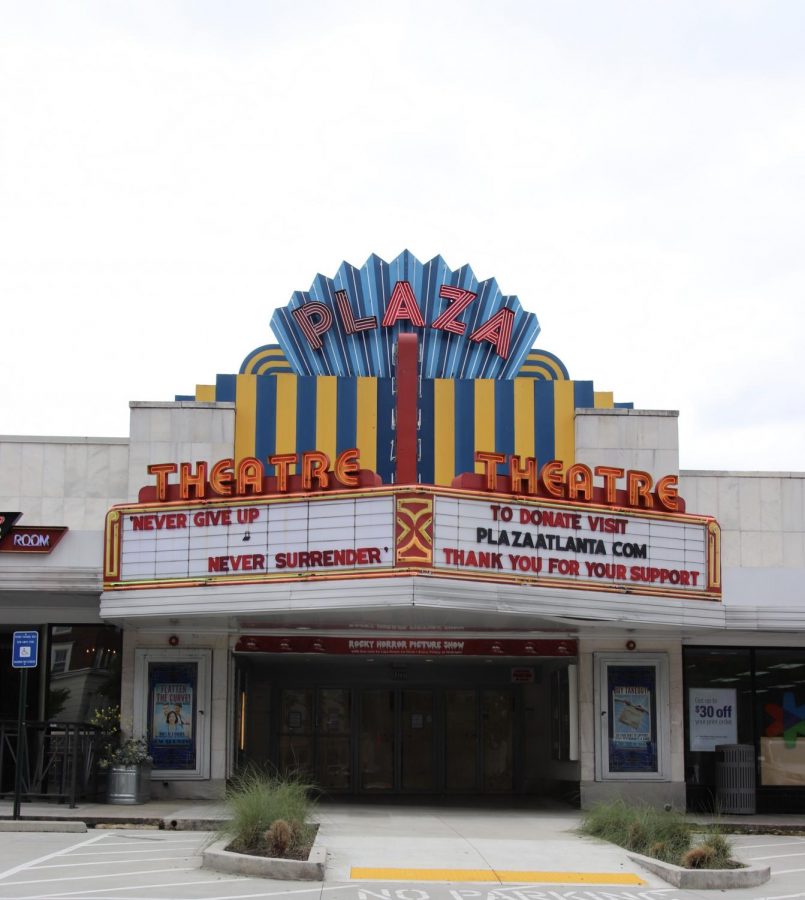 The Plaza Theatre, located in the Briarcliff Plaza Shopping Center, displays encouraging message, "Never give Up, Never Surrender". They also display the link for donations to help the theatre re-open. The Plaza Theatre is one of Atlanta's oldest cinemas but had to close due to the state's COVID-19 mandate.

The COVID-19 pandemic has not only affected public health, it has also affected the health of the economy.

Amid shutdown orders across the country, Georgia was one of the last states to issue a “shelter at home” policy and mandated that “non-essential” businesses close their doors.

One of the industries hardest hit by the pandemic is the restaurant industry.

Ayman Kamel, father of junior Nicolas Kamel and owner of 5Church, an upscale American restaurant in Midtown, said his business started feeling the impact of COVID-19 after Valentine’s Day. By March 16th, he had made the difficult decision to temporarily close the restaurant.

“We did not expect what happened to happen,” Kamel said.

The other difficult decision Kamel had to make was to furlough a lot of his staff, which originally consisted of over 75 people. Kamel plans on re-hiring all of his staff, but he is relying on government help to be able to do so.

“Help from the government will be essential in order for us to get back on track,” Kamel said. “I’m really counting on that because the payroll of over 75 people is very high.”

The Atlanta community is important to Kamel and his business. On Tuesdays and Fridays, some of his staff, including the chef, volunteer to come to the kitchen and, while practicing social distancing, make meals to donate.

“We cook and donate it to the people that are in need and also donate meals to people who are in service like [those working in] the hospitals, firefighters, and other services,” Kamel said. “So far it’s been doing great, and we are very proud of it.”

This crisis has brought out the charitable sides of businesses and people alike.

Sophomore Sophia Maxim has been working to save her grandparents’ struggling restaurant. Even though their Italian restaurant, Fellini’s, is located in Virginia, Maxim and her family have been doing everything they can from Atlanta to save the business, including managing their social media, building a website and managing the accounts.

The restaurant was doing pick-up orders, but it was still too unsafe, so it closed down. At this point, Maxim doesn’t know if it will be able to reopen.

“The restaurant has been struggling quite a bit,” Maxim said. “Everyday, they are losing money … It’s hard to keep it open and pay everybody. It might have to close down.”

The pandemic has not only hurt “non-essential” businesses but has impacted businesses that have stayed open as well.

“If you go to a gas station to get candy or something, those types of purchases have got on up a bunch because people are walking more instead of driving and needing to buy gas,” Charania said.

According to Charania, everyone still working in the stores were provided masks and gloves as a proper safety measure. There is also tape on the floors of the stores to make sure customers practice social distancing even while shopping.

In order to capitalize on the increased demand inside the stores and make up for any deficit with gas sales, Chitalwala found a vendor that sells masks and stocked his stores with masks for those who need them.

“He sold out within 24 hours in almost all of his stores,” Charania said.

More than 36 million Americans have filed for unemployment since the start of the pandemic as of May 14, according to the U.S Department of Labor.

“We have never had anything like this, ever at all,” said Tom Smith, an associate professor of finance at Emory University.

Federal programs such as the Coronavirus Aid, Relief and Economic Security Act (CARES) provide economic relief for people who are unemployed and for businesses affected by COVID-19. Kamel, Maxim and Chitalwala have all applied for this program or similar programs. However, these policies don’t address an issue that could make this shock more structural and plague the business world once everything resumes: productivity.

“When they come back, people are going to be rusty,” Smith said. “Productivity will absolutely fall as a result of this. There’s no way you can legislate that rustiness away. It’s impossible.”

Because nothing of this magnitude has ever happened before, it is difficult for the economy to function under the uncertainty.

Smith explains that empirical examples of previous recessions and how they were dealt with, as well as how the economy recovered, are not useful in this scenario due to the fact that it is an unparalleled crisis.

“It’s not even a useful thought exercise to say ‘Well, what if this is like…’” Smith said. “It’s not, it’s not like anything you’ve ever experienced.”

According to Smith, due to the unprecedented nature of this crisis, the most likely way out is trial and error. However, he warns that if people get “lazy and complacent” we could face “an explosion again.”

Concerns of a spike in cases are especially prevalent in Georgia after Governor Brian Kemp announced on  April 20th that some businesses will be able to re-open. Gyms, hair salons, bowling alleys and tattoo parlors can open Friday, April 24th, and businesses such as dine-in restaurants could open April 27. Kemp received  criticism from the public and from government officials like Atlanta mayor Keisha Lance Bottoms and from President Donald Trump as well as the public.

Business owners now grapple with the weighty decision of whether or not to reopen their businesses.

“My initial reaction was mixed feelings about it,” Kamel said. “From a business perspective it is extremely important for us. As a business, is this the right step for us or is it not the right step?”

Ultimately, Kamel decided to keep his restaurant closed at least for the next couple of weeks.

“For me and my staff, people’s safety is the absolute most important thing,” Kamel said. “Money could be made later.”

Kamel has been in contact with other restaurant owners and says that, “most of them feel the same way.”

With everything in a constant state of flux, people are anxiously trying to make calculations that balance the health of people and the health of the economy. Smith says it’s important to know that in a time like this, there is no known answer.

Despite all of the unpredictability, people are working hard and still hold out hope.

“Like all families in the US and all over the world, we can not wait to get back to normal,” Kamel said. “Hopefully, this cloud will pass.”