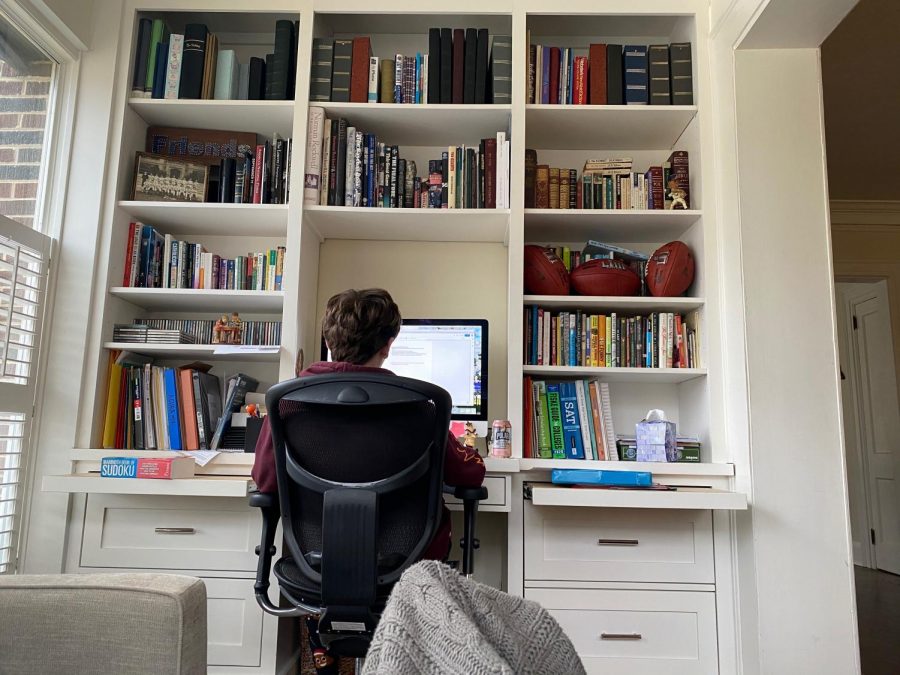 Freshman Brian Edwards works from home during the COVID-19 outbreak. Recent announcements regarding school closures through the end of the 2019-2020 school year have left students grappling with the extended reality of online school.

Atlanta Public Schools announced Wednesday that the school district would remain closed for in-person instruction for the rest of the 2019-2020 school year due to the ongoing COVID-19 outbreak.

APS made the decision in accordance with Gov. Brian Kemp’s executive order to close all K-12 public schools for the rest of the school year. Along with the order to close schools, Gov. Kemp will also sign a shelter-in-place order for the entire state on Thursday, April 2. The order is expected to last until Monday, April 13.

“New models show that Georgia will need more time to prepare for hospital surge capacity, and while we are making excellent progress with our team, we have got to be more aggressive,” Gov. Kemp said in a press conference Wednesday. “For these reasons and in accordance with [Georgia Department of Public Health Commissioner Dr. Kathleen Toomey’s] recommendation, I will sign an executive order today closing K-12 public schools for the rest of the school year.”

With the abrupt nature of the decision, administrators and teachers are coming to grips with the uncertainty of end-of-year plans. Principal Dr. Betsy Bockman said the faculty is working hard and doing “the best they can.” She said there’s “more to come” in terms of decisions.

“It doesn’t change anything right now, but I am sure that there will be changes with end of the year things, exams especially,” Dr. Bockman said. “How do you close out a school year when you haven’t seen the kids in eight weeks? Would we then go to something like pass-fail? But then what does that do to kids’ average GPA? So do we just wipe out this semester?”

Both the shelter-in-place order and school closures come after a spike in cases in Georgia. As of Wednesday, the state had 4,748 confirmed cases, 1,013 hospitalizations and 154 fatalities as a result of the coronavirus according to the Georgia Department of Public Health.

“As you know, over the past 48 hours the modeling and data has dramatically changed for Georgia and many other states across the country,” Gov. Kemp said. “The CDC has announced that individuals can be infected and begin to spread coronavirus earlier than previously thought even if they have no symptoms. From a public health standpoint, this is a revelation and a game changer.”

President Trump held a press briefing Wednesday and expressed his concerns about the virus on a national scale.

“It’s very contagious. Nobody has ever seen anything like this where large groups of people all of a sudden, just by being in the presence of somebody, have it,” President Trump said. “The flu has never been like that, and the flu is contagious but nothing like we’ve ever seen here. Also the violence of it, if it hits the right person … that person’s in deep trouble.”

Despite the threat the virus poses to the nation, President Trump hasn’t issued a national shelter-in-place order and said states should make that decision for themselves. He said he believes the nation can pull through.

“Even in the most challenging of times, Americans do not despair, we do not give into fear, we pull together, we persevere and we overcome, and we win,” President Trump said.

Students and community members have mixed emotions regarding the news of school closure.

“Initially right off the bat, I assumed that it was an April Fools’ joke given everything,” junior Jack DiCarlo said. “As soon as that wore off, my reaction was really more relief than shock.”

Senior Nadia McGlynn found herself equally surprised. However, she broke down in tears when she heard the news.

“It’s something that everyone jokes about, like, ‘I wish there was no more school,’” McGlynn said. “But then when it’s your senior year and there’s no more school for the rest of the semester, and you won’t get a [senior] prom, or a graduation, or visions, or a senior night for ultimate or banquet for drama, it’s sad. It’s weird to think that so many of the things I did were the last things I would do at Grady, and I didn’t know.”

Others were less surprised by the announcement, assuming that this would happen when APS originally closed school on March 16.

“I have been mentally preparing myself for this ever since we left,” AP Physics teacher Jillian Breen said. “Obviously, I didn’t know this for sure, but I had this feeling that we might be out. I thought that there’s no way this is going to resolve itself that quickly if it’s been such a global issue. I’ve been trying to get myself prepared, so when I saw it, I kind of thought finally, at least we kind of know now.”

In a memorandum sent to all APS families and staff, Superintendent Dr. Meria Carstarphen confirmed that students and staff would continue to “teleschool” for the remainder of the school year.

“I do have to say it’s been wonderful having them [Kevin and Brian] home and my husband as well. Especially during this time that we are grieving, it’s nice that we’re all together,” Edwards said. “I think that it is going as smoothly as it can, from a parent of two high schoolers who are doing what they need to do. I know it’s hard for some families, but we are making it work.”

While some teachers say their online class is similar to their physical class, many teachers are concerned about the social and emotional impact of learning in an isolated environment for an even longer period of time.

“I don’t think that the actual online delivery of education is all that difficult, but I think it brings home how important the community of the classroom is,” literature teacher Kate Carter said. “I think we all say we want a day off, or we’d love a snow day or we’d want a break, but in the end, this forced experiment for global online education shows that while it’s possible to teach and learn that way — and it’s certainly an amazing tool we didn’t use to have — it just doesn’t replace the community of the classroom.”

Many teachers face an extra level of stress since they have to balance teaching students and looking after their own children at home.

“I’m under a lot more stress,” Breen said. “It’s tough because now I’m at home, and my 3-year old wants to play, and he doesn’t really understand why we’re all at home, but it’s not a weekend so I can’t stop what I’m doing every time and go sit with him. That’s been kind of the hardest thing. I’m trying to make sure that I give everybody the right amount of time.”

Teachers are just as upset as students about the abrupt halt to the school year. Many teachers didn’t get a chance to say goodbye to the graduating seniors.

“I’m mostly just heartbroken that I won’t get to see my students again this school year,” Carter said. “I miss them. I don’t feel like we had proper closure before we left that last day. It’s not anybody’s fault; it was just one of those historical moments that nobody realized. Nobody really knows the importance of what’s going on until much later.”

Still, many seniors are feeling down about the end of their year and are having to think of alternative ways to celebrate the conclusion of high school.

“I know that in the near future, we all talked about decision day, and we were all going to take a picture in our paraphernalia and send it into the [senior] group chat and kind of make a collage,” senior Imani Pittman said. “So technology for sure will come into effect for a lot of things.”

Pittman says one of the hardest parts about being out of school is the looming uncertainty of how to move forward with teaching and learning.

“I think the idea of not knowing, everyone kind of having a lot of misinformation, is kind of frustrating,” Pittman said.

Despite frustration, many community members, parents, teachers and students have decided to keep a positive outlook on life during this tumultuous time.

“I think it’s important for me and for my own kids and for everybody to remember that we’re all in this together,” Carter said. “We’re living a moment in history that’s sad and scary and uncertain, but there is so much common humanity and caring for each other that I’m seeing. I think there are a lot of positive lessons about kindness and the community that we’re all going to take out of this and remember for the rest of our lives.”