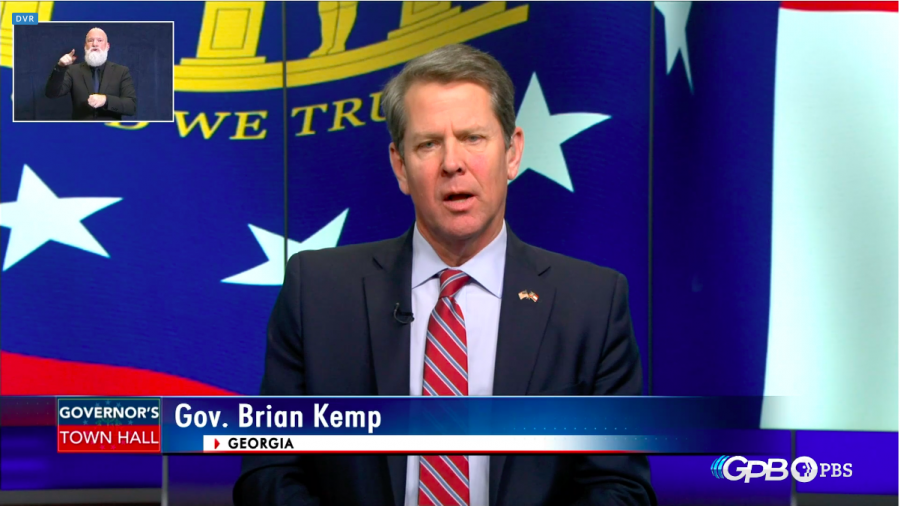 Gov. Brian Kemp knows Georgians “are hurting” amid the coronavirus pandemic and wants to “continue to fight for them.”

Georgia had more than 1500 confirmed cases of the virus as of Thursday night, a number that’s growing as testing increases, and Gov. Kemp urged Georgians to listen to health officials’ guidance and stay home.

Today, the governor ordered all public schools to remain closed through April 24. Previously, he banned public gatherings of 10 or more people and closed all bars and nightclubs.

While Georgia hasn’t experienced a crisis to the extent of states like New York, where the case count exceeds 20,000 and hospitals are running out of room, Gov. Kemp said he is working to prepare hospitals “if and when a surge occurs.” According to Mayor Lance-Bottoms, Grady Hospital, Atlanta’s large public hospital, is already at 90 percent capacity in the ICU, something she called “a tremendous concern.”

“At this rate, we will exceed our capacity in the state by May 3,” the mayor said.

Gov. Kemp said the state may need more ventilators, personal protective equipment and hospital beds. Georgia Emergency Management Agency director Homer Bryson said the agency made “a lot of progress” distributing resources to health providers but more was needed. Neither Gov. Kemp nor Bryson could say how many ventilators were needed, nor how many were on the way.

Bryson said the agency was talking with the private sector and Army Corps of Engineers to potentially use existing facilities or build new ones to make room for more hospital beds. Mayor Lance-Bottoms said an “angel donor” has supplied a downtown hotel to be used as isolation rooms for infected homeless people.

Gov. Kemp acknowledged testing as a concern. The state set up 23 testing centers in every region in the state, but test results take at least four days to come back.

“The data that we’re seeing today is two weeks old,” the governor said.

He said testing was increasing, and hopefully, would develop to produce quicker results. For now, he encourages Georgians to stay home, even if they experience symptoms. They should first call a doctor or the Georgia Department of Health COVID-19 hotline and avoid infecting health care workers in hospitals and waiting rooms.

“We can’t just be so focused testing that we’re not focused on how we flatline the spread of this virus, which is us practicing social distancing,” Gov. Kemp said.

Gov. Kemp, who has declared a “shelter-in-place” order for “at-risk” groups, did not favor the possibility of a statewide shutdown. Fifty counties have not reported any confirmed cases, and Georgia Department of Public Health commissioner Dr. Kathleen Toomey said a shutdown may not be “the correct thing” for areas with “limited spread.” Mayor Lance-Bottoms, however, placed all Atlanta residents under a “shelter-in-place” order Monday.

“If it were my call, I would have a stay-at-home order for the entire country,” Lance-Bottoms said.

Concerning the closure of public schools through April 24, Gov. Kemp said he was grateful to educators who have shifted to virtual teaching and workers who are providing meals to students. He did not answer a question about what state education standards students may be expected to meet if they don’t return to school in the spring.

“We want parents to be comfortable sending their children back to [school],” the governor said.

The governor said he hoped Congress’s $2.2 trillion relief package would pass tomorrow and that relief would be on the way as early as April 6.

“I can promise you we are doing everything within our power in the state,” the governor said.