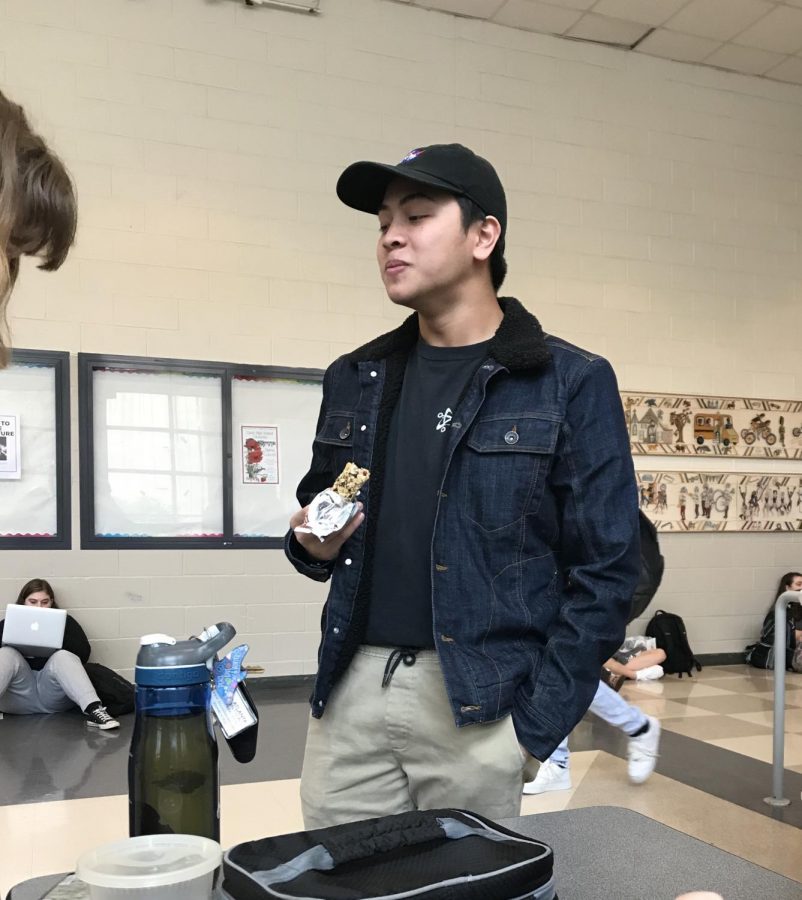 Senior Henry Nguyen is seen at lunch with his friends. Sophomore Kelly Tran is the only Vietnamese friend he has at Grady.

Senior Sarah Likins is Korean American. When Likins was younger, she used to live in Texas where she spoke fluent Korean. Since coming to Atlanta, she has lost her ability to speak the language.

“I feel like I’m very distanced from my Asian heritage because I’ve been really good at assimilation, and my family has as well,” Likins said.

According to the Georgia Department of Education Enrollment by Ethnicity/Race Fiscal Year 2020-1 Data Report, Asian students are projected to make up only 1.1 percent of Atlanta Public Schools’s enrollment. Because there are so few Asian Americans at school, it can be hard for these students to know where they fit in.

“I don’t really fit into one group that is very prominent at Grady,” Likins said. “There’s either black or white, and so I’ve had to maneuver my way throughout both of those groups.”

Likins sees similarities between her own experience and the experience of other Asian Americans at Grady.

“I would describe the Asian American experience at Grady as basically non-existent, just because of the fact that there’s so very few of us, and at least the Asian Americans I’ve met at Grady, are very assimilated, as I am also,” Likins said.

As an Asian American at Grady, sophomore Futa Kakinuma doesn’t feel that he has faced any bias or racism at school.

“Not at Grady,” Kakinuma said. “Jokingly sometimes, but it’s never really been serious.”

However, with the recent outbreaks of Covid-19 (coronavirus), xenophobia and racism have especially targeted members of the asian community.

“With Coronavirus going around, some of my friends at Grady who are Asian have gotten a lot of remarks and everything,” said senior Henry Nguyen. “I know that Coronavirus has caused a lot of problems with Asian Americans in general.”

Along with racist remarks, Likins feels that the “model minority” stereotype is an issue that many asian students face, along with herself. The pressure of making all A’s and being one of the smartest in her class has been overwhelming for Likins.

For Nguyen, his childhood and upbringing were influenced by his immigrant parents.

“In a sense, I feel like my Asian heritage does influence my identity because just growing up Asian, there’s a sort of part of that which is different than how other parents might be,” Nguyen said. “That might be my parents being immigrants coming from another country.”

Outside of school, Nguyen is able to play a part in his Vietnamese culture.

“I go to Church on Sundays and it’s solely Vietnamese based, so I know a lot more Vietnamese people than I would at Grady,” Nguyen said. “In fact, it actually took quite a while for me to see anyone else Vietnamese at Grady, and that just happened to be sophomore Kelly Tran.”

Keeping a part of your identity and culture is advice that Likins would give to any Asian American student coming to Grady.

“If you are very Asian, keep that. Don’t let that kind of go away like I did,” Likins said. “It is very easy for Asians to want to assimilate because we like to fly under the radar.”

Both Nguyen and Likins value the act of preserving your Asian heritage.