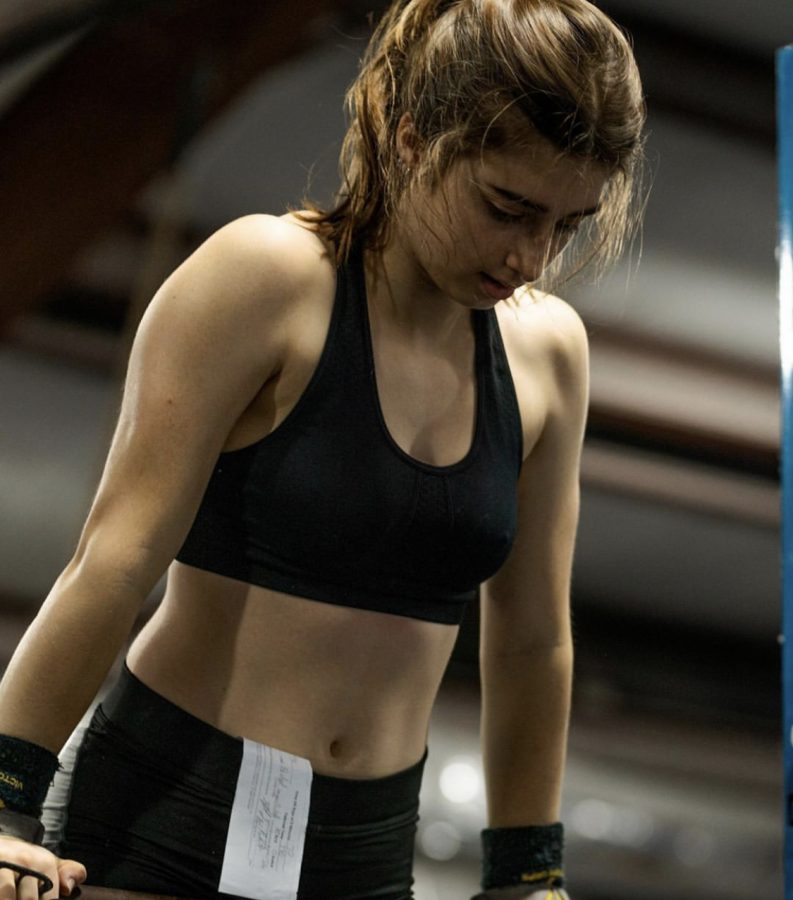 Amelia Kushner pulls herself over the bar during a "WOD," or workout of the day at her CrossFit box.

Flash-forward two years and senior Amelia Kushner says that four years ago, she never would have imagined she could be where she is now – both physically and mentally.

“A lot of my role models in eighth grade were models on the Internet and people who were really skinny,” Kushner said. “I lowkey had an eating disorder, and I really wanted to be skinny.”

After quitting soccer when she was 13, Kushner struggled with depression and her body image. A 2015 study published by the National Center for Biotechnology Information by Dr. Dana Voekler of West Virginia University found that, “Adolescent girls face considerable risk for the development of clinical eating disorders due to intense body dissatisfaction and pressure from peers to ‘look’ a particular way.” Like many girls her age, Kushner was not immune to these societal pressures.

To help exert her energy in a positive outlet, Kushner’s father, Steven Kushner, signed her up for CrossFit, a gym that integrates strength training with cardio and elements of gymnastics.

Kushner opted for the latter of this ultimatum, and it changed her life.

Steven Kushner, who had been doing CrossFit for more than five years, says it’s been “fun” watching Amelia grow and learn from the sport.

“She would wake up at 4:50 or 4:45 a.m. and come with me to the 5:30 a.m. class, including on days she had no school,” he said. “But she loved it, and we love doing the Saturday workouts together. Despite her being significantly younger, there were no kids in the class … but despite that, everybody: men, women, [aged] 25-55 were all very supportive, happy to see her, and I think that something most teenage kids never experience.”

Kushner agrees. She says CrossFit exposed her to many new, supportive people.

Kushner began incorporating healthier, protein-heavy foods into her diet, which she says allowed her body to grow.

“I saw that to do all of these cool things and to be really strong like that, I had to have a big body and want to gain weight and want to look like that,” Kushner said. “So it really changed my focus. I started eating more … I wasn’t scared of food anymore, which was cool.”

Kushner found that CrossFit not only made her strong physically, but it provided her with a support system: a community of people that shared similar goals, and who were willing to push her every step of the way to achieve hers.

“I honestly was scared of looking bad when I joined, like looking weak … because everyone was older than me, but it’s really cool to start at that place because every time I hit a milestone, even if it was something really small or something that everyone else in the room had already done, they were really excited for me,” Kushner said.

Now, Kushner has become so involved with CrossFit that her birthday wish last year was a pink barbell.

“All she wanted was her own barbell,” Steven Kushner said. “So I bought her a pink barbell … there’s only about five or six people at the gym, at our box, that have their own barbell, and she’s one of them, and they hang in a special place in the hallway, away from all of the commonly used barbells.”

Through CrossFit, Kushner found role models like Breona Evans, a nationally-ranked CrossFit Games contender and friend at her CrossFit gym, or “box.”

“I think the CrossFit community is second to none,” Evans said.

Evans has supported Kushner through her fitness journey both inside of the gym and out, coming to Kushner’s high school plays and musicals.

“I think it’s amazing that she was getting up before school to come train at the gym,” Evans said. “That work ethic carries over to every aspect of your life. I feel like every lesson I’ve learned through CrossFit has translated into my career, and it has allowed me to see a lot of success there.”

Evans also found that she has been able to unleash a new confidence in herself through exercise. She says that through establishing a healthy, consistent, workout routine, she’s seen improvement in her skin, diet and body.

“I completely made a 180,” Evans said. “Of course I’ve gotten the comments [from other women] like, ‘I don’t want to have muscles like you,’ but those comments don’t really bother me. I’m not in it for the way I look, I’m in it for the way it makes me feel.”

Evans says she encourages other women and girls to adapt that mindset as well.

Like Kushner, junior Ava Young finds strength training empowering. Young has a personal trainer whom she trains with every week.

Young says that although she is a member of her local L.A. Fitness, where she exercises regularly, she wanted a space where she could push herself, that was supportive of her and her beliefs.

“A lot of gym spaces aren’t really fat positive, and so, I wanted a trainer or at least a gym that understood that it’s fine to be a female who lifts, and it’s fine to be a larger person and still be active,” Young said.

She says that there is sometimes a negative stigma around women lifting weights.

“People associate lifting with bulking up, and I can’t explain why there are societal standards, but people think that women should automatically just be more slender,” Young said. “[They think] lifting will lead to bulking, which will lead to gaining weight and looking larger.”

Like Young, Kushner wants to remind young girls that there shouldn’t be a set image or figure that comes with the idea of women and young girls being “fit” or “in shape.”

“Exercising isn’t about trying to lose weight or trying to change yourself in how you look,” Kushner says. “If you exercise with that frame of mind … you’ll never feel like you’re doing anything that’s worth doing. If you frame it like, ‘I want to be able to squat 200 lbs,’ or ‘I want to be able to run a mile in 8 minutes;’ that’s how you have to structure it in order to feel accomplished and feel like you’re doing good for yourself.”