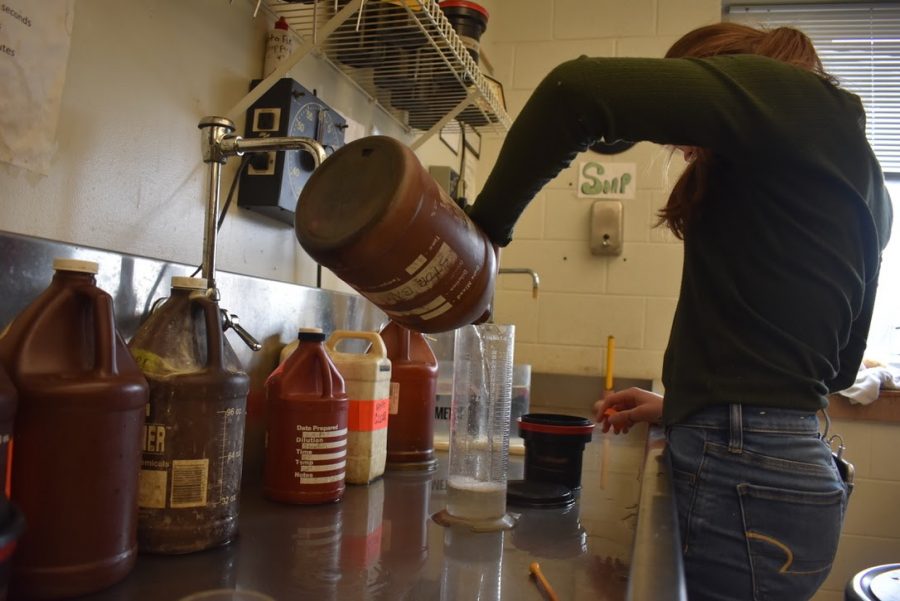 Sophomore and Photo II student Evelyn Lowry measures the amount of stop bath needed to develop her film. In the film developing process, a stop bath works as an acid to neutralize the effects of a base, in this case developer.

However, there is a growing shift back to film. According to a survey conducted by film producer Ilford in 2014, 30% of the thousands of respondents who used film were under 30. Many people are returning to the medium due to the aesthetic appeal, the creative control associated with film, and being able to process their own film.

High schools with dark rooms and film programs are becoming increasingly rare; however, at Grady, the program is thriving. Many students who start the pathway have never had experience with film photography, but decide to check it out anyway. Photo II student and sophomore John Reilly found the pathway by surprise.

“I came to the 8th grade thing, and I just saw all the cool photos,” said Reilly. “My granddad used to do photo here. He gave me his camera that he used when he was taking photos.”

The photo room at Grady is large enough to accommodate full classes of students, a luxury for darkroom photography. The classroom is equipped with sinks and dryers for developing and drying film, while a door to the back leads to the darkroom. Photos are printed in this room, and is where the magic happens.

“I like being in the darkroom and the calmness of it,” said Photo II student and sophomore Jalen Hunter. “Just doing everything right.”