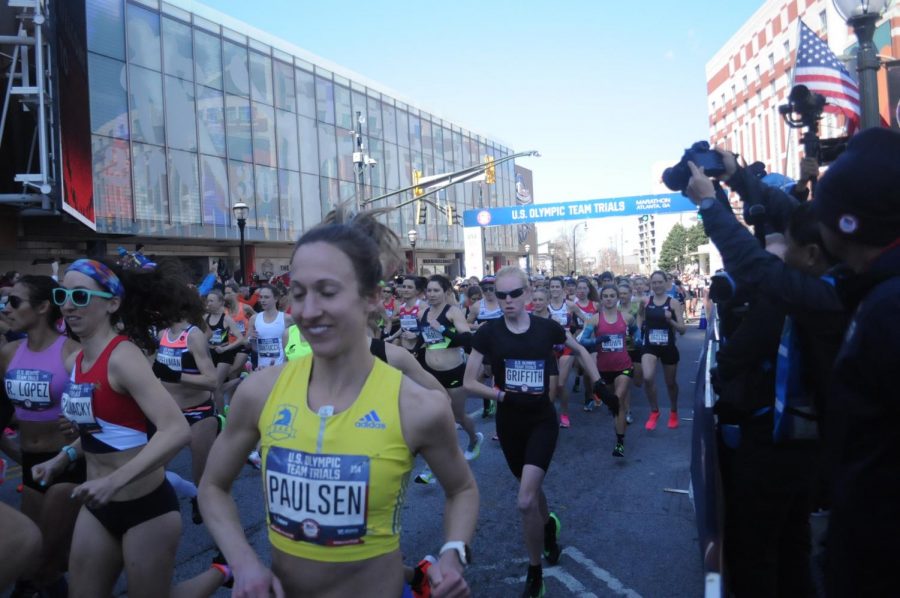 STARTING STRONG: 2016 Grady alumna Gracie Griffith starts the race at the Olympic Team Trials – Marathon on Feb. 29. She finished the race in 95th place overall after being seeded 448 out of 465 athletes on race day, earning a new personal record (PR) of 2:43:36, shaving one minute and 16 seconds off her qualifying time.

When Gracie Griffith ran her first marathon as a sophomore at Clemson University, she immediately fell in love with the distance. Two years later on Oct. 13, 2019, she ran 2:44:52 at the Bank of America Chicago Marathon, putting her eight seconds clear of the Olympic Trials standard.

“In April (2019), I did Boston for the first time and ran a 2:51 and that was three weeks after I won the Publix Atlanta in 3 hours and so I was like, ‘Wow that is a big jump again and that is getting pretty close to the 2:45 [Olympic Trials qualifying time],’” Griffith said. “I was like, ‘Yeah I definitely want to go for it in Chicago,’ in that fall so October 13, 2019 was the Chicago marathon… I just squeaked under the cutoff.”

Griffith graduated from Grady in 2016 and was introduced to running by cross country coach Jeff Cramer, and in her senior year, Griffith placed 3rd at the state meet. Her ability to set goals for herself is one of her outstanding qualities, says Cramer.

“I think she is good at setting goals that are reasonable but are real challenges,” Cramer said. “She is not going to set a goal that is going to be easy to reach and she won’t have to do that much to get there and she is not one that is going to go around telling everyone what exactly her goals are. She sort of keeps them to herself.”

Although running is a competitive sport, Griffith learned to simply enjoy the sport for the challenge and the athletic endeavor itself, something she learned from Cramer at Grady.

“I think the thing I learned about running in high school is that running is pointless if you are not having a good time, and I think that is what Coach Cramer is all about at Grady cross country,” Griffith said. “For me, this is a hobby, so like yeah I want to be competitive, I want to train hard, but if I am not enjoying it, it is a very time-consuming hobby.”

Griffith was a basketball player for Grady during her freshman year when Cramer approached her about joining the cross country team because he noticed her intensity and good running form.

“A couple weeks later I was having lunch with my family at Parish right on the edge of the Beltline and she came running by and I hollered at her, she stopped and I went out and talked to her again,” Cramer said. “I think she was really surprised that I knew her name and that I was following up on my initial invitation to her. I just continued to talk to her through that year and then she signed up in the spring when I signed everybody up [for the next season]. Once we got going, she was totally on board. It was more of a question for her again because of her intensity whether she was going to overdo it.”

Aside from Cramer, Griffith has never had a running coach and elects to be self-coached in her running.

“I think it is that I am very committed to what I say I am going to do…once you start making excuses, it is a slippery slope,” Griffith said. “You start like, ‘Oh I am going to knock off a couple miles because I am tired;’ that is a slippery slope. I just run the mileage. I always decide what mileage I am going to run before I leave the house because most of the time on a run you are going to be like ‘oh I’ll just do one less. Oh, it’s fine.’ But if you do that, you are shortchanging yourself at the end of the day.”

On the Monday leading up to the Trials, Griffith caught the flu but was determined to stick to her own schedule so as not to let anything get in the way of her goals. After she received her diagnosis, she proceeded to write an essay, study for a final and run.

“I was going to be okay despite the fact that I wasn’t doing what you would probably do with the flu, but I think it took my mind off of it (the race) a little bit maybe and that allowed me to at least not focus on the race and panic,” Griffith said.

Griffith competed in the Olympic Trials on Feb. 29 throughout the streets of Atlanta. Despite being seeded as 448 out of 465 women who competed that day, Griffith ran a personal best on what was widely regarded as one of the toughest marathon courses in the world finishing with a time of 2:43:36 in 95th place.

“I really had no idea at all that I was that far up until my parents told me after I finished,” Griffith said. “I was so focused, to be honest, getting to the end and not fading in that last 10k which is so common for people to do in the marathon.”

The difficulty of the course and the brutal wind conditions proved a large inhibitor for many, as top seeds like Jordan Hasay was miles off the top three, and the three female Olympic Team qualifiers were all upsets. However, Griffith was able to use her ‘home court advantage’ and to properly prepare for the race’s hills.

“It was definitely a lot harder conditions because of the wind than I ever imagined,” Griffith said. “In terms of the course, I felt like really well prepared for the course. And the course, like yeah, that didn’t shock me, so I think that was good.”

Griffith’s strategy was to run in a pack and keep an even pace. Her average split in the Trials was six minutes and 15 seconds per mile, and she was happy with her ability to hit her splits.

“That was definitely a success: I ran an even race which I’m really happy about,” Griffith said.

At age 21, Griffith was the second youngest finisher at the Trials, but she thinks her accomplishments are only the basis for her future as a runner. She has run six marathons, and was able to shave minutes off her time every race, leading her to believe that regardless of the toughness of the course or outside factors, “I am doing something right with… my training.”

“It is just a dream come true. It is something I didn’t know until after the race either about being the second youngest,” Griffith said. “In terms of my goals going forward, it is just to do what I have done, continue to chip away at it and train hard… I am definitely going to focus on the marathon for a while because it is my favorite distance so I don’t see any major change in distance or anything and I love to travel with my family and stuff so I would just love to continue to travel to do marathons every year with my family.”

Griffith was able to use her recent time to qualify for the London marathon, a perk reserved for British citizens, which Griffith is because her father is from England.

“I don’t know if it’s going to be canceled because of the coronavirus, to be honest, but I’m super excited if it’s not canceled,” Griffith said.

The Grady cross country team, led by Cramer, came out to support Griffith at the Trials, and their support via cheering and wearing team shirts was additional motivation for Griffith. She hopes her accomplishments as a young marathon runner from Grady will inspire the next generation.

“It makes me so happy to see the next wave of Grady runners because I owe Grady cross country everything,” Griffith said. “I wouldn’t even be running without that team and that program and Coach Cramer. Hopefully, this (Trials results) inspires somebody else that like, you can definitely do it. You don’t even need to be at a top cross country program in high school, you don’t need to be a great runner in high school, and you don’t need to run in college to just completely surprise everyone and yourself and do something really special.”