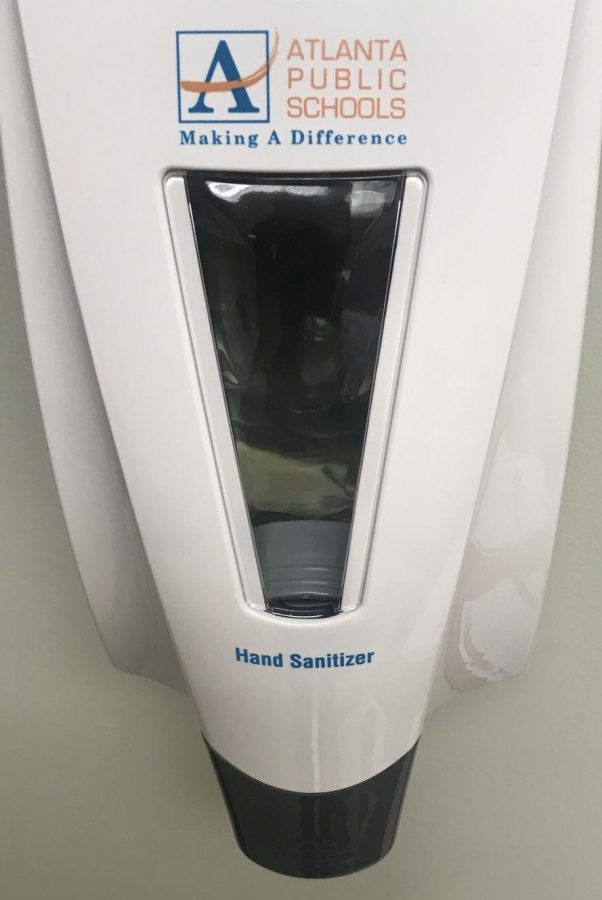 This hand sanitizer dispenser was recently placed next to the Kronos clock where teachers clock in for the day in the Office of Student Affairs.

The strain of the coronavirus, which has claimed an estimate of over 4,000 lives worldwide as of March. 10, is directly affecting many people in the Grady community.

Junior Julius Levine has felt the stress this virus has caused as he watches his family live in fear in China. His grandparents live in Tianjin, and his uncle resides in Shanghai.

The outbreak began in Wuhan, China and has spread to more than 100 countries. The compact nature of the city made it a breeding-ground for the virus to incubate and spread.

Although Levine’s family is not near the virus “hot zone” in Wuhan, the family still feels the strain on daily life.

“Their cities aren’t super heavily affected, but at this point, everyone in China is affected,” Levine said. “They can’t go on public transportation much anymore; so, it’s not too big of a problem in their personal lives, but they’re worried that it might escalate because it’s a country of a billion people.”

As health officials globally become more involved overseas, some members of Levine’s family wanted to take a more hands-on approach when it came to helping their extended family.

“My mom works at the CDC; so, she was considering going to China for a couple of weeks or months to help out because they need people who understand the country,” Levine said. “But right now, she’s in the middle of the flu season.”

Levine’s mom was born and raised in China, and Levine notices how this virus outbreak has affected her personally.

“She’s nervous for her country, for their economy, and of it all escalating because she’s very proud of China,” Levine said. “She’s admired their response so far … she’s just concerned for the safety of her country.”

COVID-19 not only signifies a deadly virus, but Levine has witnessed somewhat prejudiced remarks toward members of the Asian community. Although he hasn’t experienced anything other than jokes, he sees a trend in social media.

“I know that my mom recently asked me if people were doing that to me because she pays attention to Asian social media (through WeChat), and it’s been happening to a lot of other kids,” Levine said.

As of March. 12, there were 31 presumed and confirmed COVID-19 cases in Georgia.

On March. 2, after two people in Fulton County had tested positive for COVID-19 after one had returned from Milan, Italy, Gov. Brian Kemp spoke at a news conference telling Georgians to remain calm and reassured them that the State of Georgia is prepared. He urged people who believe they have symptoms to contact their medical provider.

On March. 6, President Donald Trump visited the Centers for Disease Control and Prevention  in Atlanta.

Fear of spreading the virus has led many school related events to be cancelled, including orchestra’s LGPE, the upcoming National Youth Bike Summit that was to be held at Grady, and all Atlanta Public Schools

Sophomore Grace Porges had been looking forward to spending a portion of second semester abroad in France. However, her trip to Toulouse got canceled at the last minute due to COVID-19 developments.

“I was really excited for the trip, and I found out [it was cancelled] a week before, and I was finally getting my last preparation going, and hearing it got cancelled had me really bummed out,” Porges said.

Although the coronavirus has caused panic in the global community, Dr. Bruce Ribner, an infectious disease doctor at Emory, thinks there’s a more constructive way to look at the issue.

“There’s probably only 29 people in the United States who have SARS Coronavirus 2 infection,” Ribner said. “None of them appear to be seriously ill; in contrast, over the last season, we had millions of people with influenza and roughly 11,000 or 12,000 of them died.”

Ribner believes this type of attention should be paid to other, more currently pressing diseases this year.

“If people are going to get concerned about an infectious disease, I would love to see this kind of attention being paid to influenza,” Ribner said. “While SARS Coronavirus 2 may turn out to be a problem for the U.S., but when 11,000 people are dying every year of influenza, that’s a problem … If people want to do something to protect themselves, they should get a flu shot.”