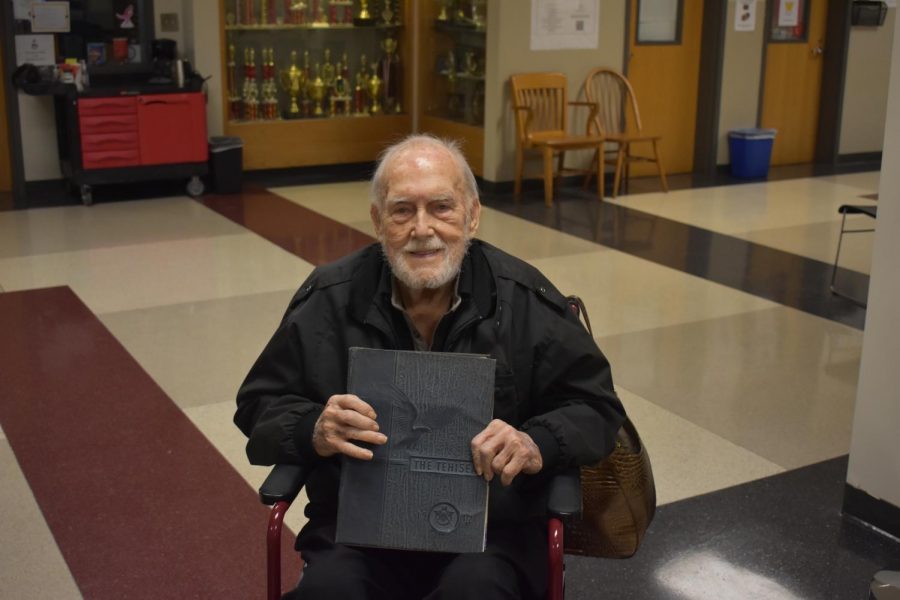 Tech High alum Ira Giles holds a yearbook from 1942, the year he graduated, while on a tour of Grady.

As a student at Tech High in the early 1940s, Ira Giles took two streetcars to get to school.

He went to his classes in what is now the C Wing of Grady, then headed to the concession stand outside for lunch. When he played the trumpet for marching band at football games, he went to Cheney Stadium in Grant Park.

“You would never know it’s the same place,” Giles said.

Besides being an alum, Giles has another connection to the Grady community: Inman Middle School Georgia History teacher Mike Dorsey is his grandson.

“His stories are amazing to me,” Dorsey said. “His whole experience, I thought, was so fascinating with Tech High School because he learned his trade there doing amateur radio, and then that led to a job at Bell Aircraft and then Pan American [World Airways] and then Lockheed [Martin], and that whole journey began at Tech High.”

Dorsey contacted principal Dr. Betsy Bockman during winter break asking if Giles could take a tour and see how the school has changed. Giles went on the tour with Dorsey and his daughter Claire – who, like Dorsey, teaches social studies – on Jan. 18.

“To me, the history of this school is really important, and I wanted to feel that and hold onto it and at least have a sense that I could own it a little more than just reading from a book,” Dr. Bockman said. “We have a lot of history about Boys High; that’s been a very active alumni group, and I don’t want to lose Tech High.”

Boys High expanded to include Tech High in 1909, and both schools moved to the current campus in 1924. They united under the name “Henry W. Grady High School” in 1947. Giles said that though there wasn’t much social overlap between the schools, the only animosity that occurred was during football season, when they would throw rocks at each other. Giles did not participate.

“I went to Tech High because I wasn’t really planning on going to college; I just wanted to learn a trade,” Giles said. “Then I took the Civil Service exam, and they sent me to college.”

Giles graduated in 1942, attended Georgia Tech and Auburn University, and participated in the war effort at the Bell Aircraft Corporation, known as Bell Bomber. He got drafted for World War II during this time but was turned away due to asthma.

“I felt bad because I wanted to do something, so I left Bell Aircraft and joined the Merchant Marines, which didn’t require a physical, and I was able to go in as an officer because I had a radio license,” Giles said.

His work with the Merchant Marines, the section of the military transporting supplies and troops, sent him traveling around the Americas, including San Francisco, Miami, Ecuador and Guatemala, until he settled down at aerospace and defense technology company Lockheed Martin in Atlanta, where he worked for 38 years before retiring in 1948.

Bockman noticed many similarities between Giles’ life and that of her father, Thomas Bockman. Both grew up in Atlanta, and they were around the same age.

“I could see a lot of the same things between my father and him; they were both electrical engineers,” Dr. Bockman said. “They worked at the Bell Bomber plant together building planes. Everybody his age, that’s what they did; if they weren’t fighting overseas, they were building planes during the war effort … And then just the growing up in Atlanta. I thought about it all afternoon, and I talked to Mike later that afternoon and he said it made him think a lot, too.”

To Dorsey and Dr. Bockman, Giles has helped bring the history of Tech High, often overshadowed by Boys High due to its stronger alumni network, to life.

“I knew all about Boys High, but I knew nothing about Tech High,” Dorsey said. “Now I’m proud to know about it.”