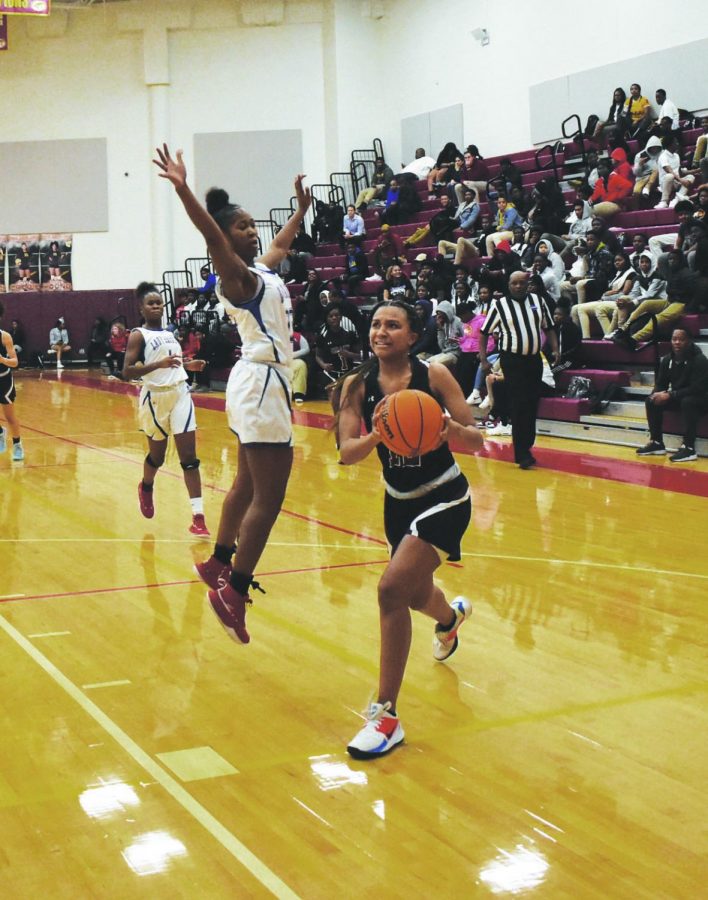 Sophomore Jade Lewis drives to the basket in the Region 6AAAAA semifinal game against Riverwood at Maynard Jackson on Feb. 6. The Knights lost 62-59. Lewis is the only member of the team to be named first team All-Region. Her sister, junior Trinity Lewis, was named second team All-Region and senior captains Jaliyah Lett and Kaitlin Palaian each received Honorable Mention.

The girls basketball team headed to the state playoffs for the first time in six years after finishing 16-11 overall and 9-5 in Region 6AAAAA during the regular season. The Knights lost to three-time defending state champion Buford 76-44 in the first round on Feb. 15.

Two years ago, the team finished 4-21 and is now mostly underclassmen.

“This is a good accomplishment for Grady basketball, for Grady sports in general,” head coach Roderick Hill said. “I mean, it’s good for these girls; they’re mainly sophomores, some freshmen, and for us to go to state is a big accomplishment. We got two seniors; that’s it.”

“It’s been good; they’re great ball handlers; they’re great outside shooters; Trinity’s defense is very intense,” Hill said of the Lewis sisters. “She’s very aggressive on the defensive end, sometimes too much, but she is our spark.”

The Knights finished fourth in the region tournament after a loss in the semi-final against Riverwood 59-62 on Feb. 6. The Knights also lost to Lithia Springs 50-38 in the third place game on Feb. 7.

Against Riverwood, the girls were down in the first half by as many as 11 points, but crawled back to within one point in the fourth quarter. “Fighting back” was one of the team’s main strengths, said Hill, who added the team needs to work on closing the final gap.

“We’ve got to do a better job of closing games, making the tough stops when needed, like this game, for example,” Hill said. “We get down, and we come back, and we close it to like four or two (points) and we just can’t get over the hump.”

“We need to make sure we play through the whole 32-minute game,” Trinity Lewis said. “Often, our biggest weakness is ourselves, and we don’t push ourselves the entire game.”

Reaching the State 5A playoffs this year will have major implications on the basketball program, Hill says.

“We’re going to work hard and use this as momentum for next year, too,” Hill said. “They know they can get there now; they know they can beat teams like Riverwood … I do think winning helps a lot. Teams like Maynard Jackson, they make state playoffs every year, and girls want to play for them because they go [and] they win. So, if we can get that same culture here at Grady, the sky is the limit.”

Hill believes the playoffs are “really about the experience,” and he wanted to use the playoff run “also for putting Grady out there” to expand the culture of Grady basketball. Before the state competition, Hill wanted to work on “attacking the basket” in order to get more offensive rebounds.

“At the end of the day, we’ve just got to get better quality shots,” Hill said. “When we started going in, we got the ball high post a lot; Kaitlin would be turning around, getting to the rack, we got easy layups. But when we started reverting back to our old habits, shooting threes on the first pass, [we’ve] got to get the ball middle, and let Kaitlin work in the middle, and attack and create off of that. Kaitlin’s really been a big addition, offensively and defensively; I mean it’s just changed our entire game.”

Palaian’s return to the team was a key to the team’s success, Hill says. She is primarily a soccer player.

“I’ve been begging her to play for the last three years because I had her at Inman her eighth grade year, and like, she’s our best player,” Hill said. “Just her athleticism, she has five lungs … She plays the full 32 minutes every game. If we have five players that play at the level of intensity she plays, we’d win every game.”