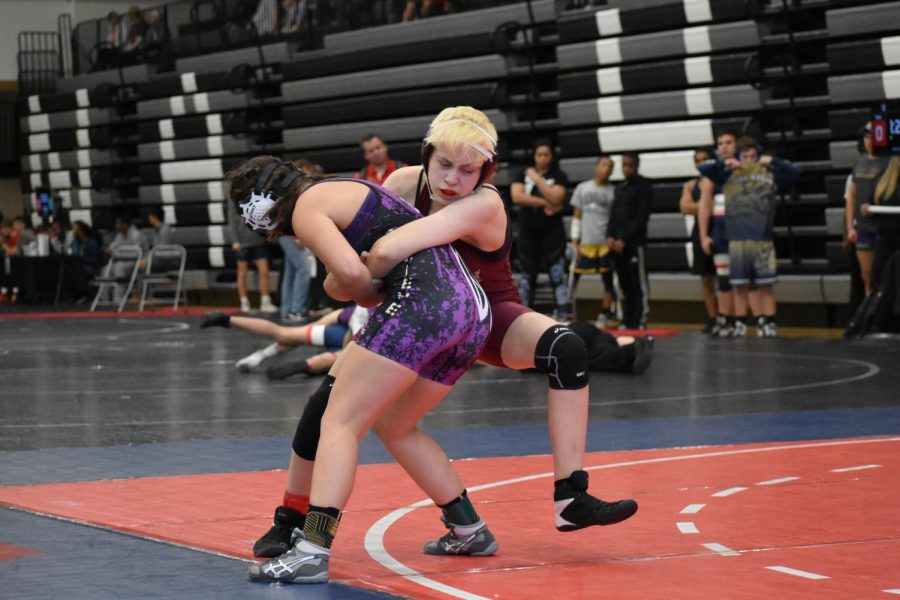 Junior Sophia Little wrestles against an opponent at North Atlanta Warrior Classic tournament during the 2019-20 season. Little is Grady's first female wrestler and is the only one of the Knights to qualify for the state meet.

Junior Sophia Little is the only girl on the Knights’ wrestling team this year, and the only athlete to make it to the state tournament, which starts today and ends Feb. 15.

Little placed second at sectionals, pushing her into the state tournament. Both Jack Collins and Marcus Shackelford each finished second in the region tournament in their weight classes; however, neither placed in sectionals, putting an end to their season.

“We just had sectionals last week, and I placed second in that; so, now we are going on to state and hopefully we will bring home a good rank,” Little said.

Ever since coaches David Bunker and Joshua Crowder arrived last year, the team has seen growth and change.

“Year one, it was very much experimental for us. Seeing what worked and seeing what didn’t,” Bunker said. “We have that down this year.”

Although girls are welcome on Grady’s team, Little’s attempts to recruit other girls were unsuccessful, as most were uninterested.

One reason girls may not consider joining wrestling is a desire to appear feminine based on gender stereotypes.

“Usually, when you ask a girl about how she wants to get in shape, she says she wants to get toned and slimmed-down instead of getting muscular,” Little said. “Wrestling is seen as a very masculine sport, so it makes sense why girls don’t really want to do it.”

Another explanation for the lack of girls in wrestling might be parents’ misconceptions and hesitations toward the sport.

“Parents don’t want their girls wrestling other guys, and just don’t understand that there’s separate divisions for them,” said Crowder. “It’s a mixture of reasons, mostly just not being knowledgeable of certain things.”

Little has noticed that girls wrestling is sometimes taken less seriously than boys wrestling and feels she has had to put in some extra effort to prove her abilities.

“You have to work extremely hard because you don’t have the testosterone, that automatic muscle strength that guys are built with,” Little said. “You have to be better at technique, skill, mental game. You have to make up for not being as physically strong as a boy with everything else.”

Little appreciates how her coaches make an effort to prevent her from feeling unwelcomed on the team. She feels respected and included by her teammates.

“My coach is very equality-centered,” Little said. “He doesn’t let any gender discrimination happen, whatsoever. He pulled me aside and asked if I had any problems with boys on the team, and I said, ‘No.’ They take me seriously and don’t go easy on me during practice either,” she said.

Crowder says he and Bunker make sure Little is not treated any differently by her teammates because of her gender. They strive to create an environment of accessibility, friendliness, and fairness.

“We try very hard to make sure that she’s treated fairly, and at the first sign of anything, we’re going stop it because we can’t have any of that going on. From what I see, everybody’s very respectful,” Crowder said. “When we step on the mat, we’re just wrestlers; it doesn’t matter who we are.”

Although Little’s experience at Grady has been positive, girls wrestling is often overlooked and treated as inferior to boys wrestling in the U.S.

“In certain states, from certain points of view, women’s wrestling is absolutely not treated the same,” Bunker said. “Unfortunately, we live in a world where there’s older people who don’t understand and are stuck to tradition.”

Crowder recognizes that there are both advantages and disadvantages of being a female wrestler in terms of physicality.

“The way that womens’ bodies work is very different from the way the male body works,” Crowder said. “Women tend to be more flexible and a lot more fluid in their movements, whereas men are very rigid. From my experience and what I’ve seen, women tend to not use their strength as often.”

However, he does not believe these factors should restrict who can participate in the sport. He aims to provide everyone with an equal opportunity to develop their skills.

“I don’t care what gender, orientation, race, religion – I don’t care about any of that. I just want to have people on the mat, so that they can learn what I learned when I was in high school,” Crowder said.

Bunker also believes anyone is capable of succeeding in wrestling: “I watched a kid … he had his arm cut off from the elbow down, and he won. He was destroying the mat,” he said. “The conclusion is that it doesn’t matter if you’re chopped off at your hips. The ability to get on the mat and work yourself is most important.”

Although Georgia participation is increasing relatively fast compared to other states, Bunker believes the social stigma surrounding girls wrestling is limiting its growth.

“Unfortunately, most high schools around us don’t have that female participation yet,” he said. “It’s seen an uptick, but it’s still relatively small.”

Bunker wants students to know anyone can wrestle, regardless of gender or body type.

“It’s also the high school kids’ mindset that needs to change by realizing it’s available and not something that only guys can do or only strong kids can do. Anyone is welcome in this room,” Bunker says.

Both coaches are enthusiastic about the growth of women’s wrestling, both at Grady and on higher levels, and excited to see it evolve.

“On a larger scale, more women are being accepted into colleges and getting scholarships for wrestling,” Crowder said. “It’s super awesome. It’s continually growing, and I think that the word is getting out there more that it’s okay for women to wrestle.”

In the future, coach Crowder and coach Bunker hope to expand the wrestling team by recruiting new athletes and to eventually add an all-girls’ team. They want Grady students to know wrestling is open to everyone who enjoys “working, sweating or bettering yourself.”

“I just hope that the word’s put out there that it’s an option. The more people we recruit, it’s a win for wrestling as a sport,” Bunker says. “You don’t have to come in as an athlete. We’ll train you to be an athlete. If you decide mentally that you can make it through one of our practices, then you’re an athlete on day one.”

With reporting by Duncan Tanner