Behind the scenes of “Sweeney Todd” 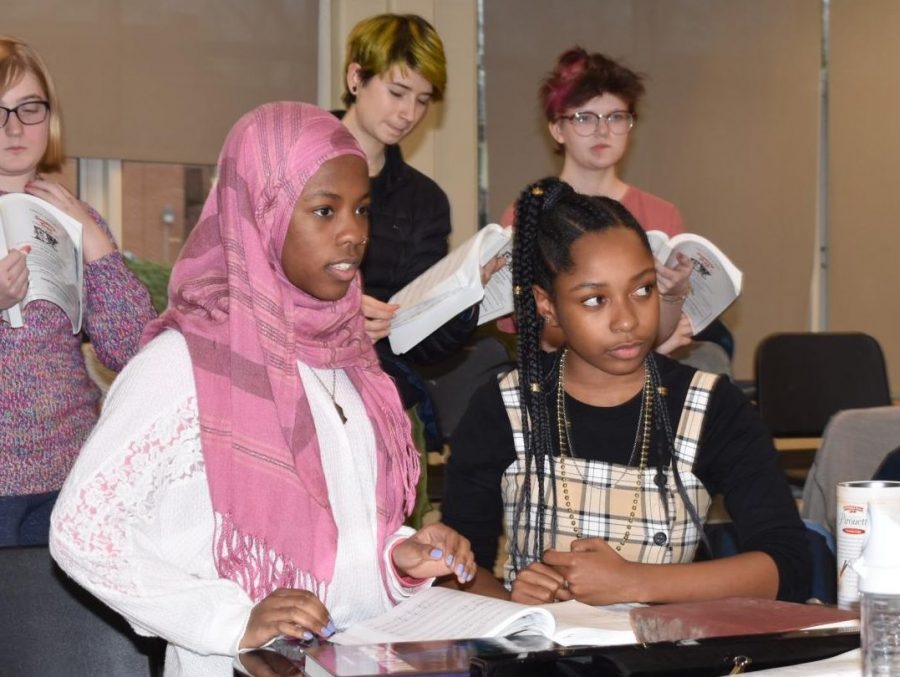 The theater department has been working tirelessly on its spring musical, “Sweeney Todd: The Demon Barber of Fleet Street,” through set-building, vocal work and acting rehearsal.

“We’ve really dived right into the production,” said senior Maddie Thorpe, who plays the Beggar Woman. “We’ve been going very quickly with blocking the show and working musical numbers, and the set is coming along faster than I’ve ever seen it for any show at Grady.”

Often considered by critics as one of the darkest musicals ever written, “Sweeney Todd” explores themes of heart-wrenching revenge, unsettling comedy and gruesome terror.

“I think the cast and crew, as a whole, are really excited because we’ve never really done anything like ‘Sweeney’ before,” Thorpe said. “Most of our musicals aren’t that dark and tend to be more lighthearted, so I think people are excited about the contrast of ‘Sweeney’ being a horror musical. They’re excited to get bloody.”

Drama teacher and director Jake Dreiling was cast in “Sweeney Todd’ right out of college.

“It’s still one of my favorite shows of all time,” Dreiling said. “It’s like a Shakespearean tragedy. It’s so rich in character, and the music is incredible, so I’ve been waiting to do it for a very long time.”

The scenery is intended to resemble mid-19th century industrial London.

“Dreiling came up with some basic concepts. He wants lots of perforations, and he doesn’t want the set to be too literal,” art teacher John Brandhorst said. “There are elements of text and traditional English facade. The basic idea is somewhere in the Venn diagram of ‘Ready Player One’ plus Diagon Alley.”

The crew has been spending around 15 hours each week constructing the elaborate set. Thorpe believes that their hard work is often overlooked and underrated.

“People need to recognize the importance of the crew in theatre. They work so hard and don’t get half the credit that actors do, so I wish more people would appreciate them,” Thorpe said.

Chorus teacher Kevin Hill believes that the vocal work is challenging, although he is confident that the cast can handle it.

“I think it’s some of the most difficult musical theater music out there. I was talking the other day with the musical director for the Atlanta Opera, and he said the vocals are definitely the hardest part,” Hill said.

Dreiling believes “Sweeney Todd” is a valuable experience for the cast and crew involved because it provides a different side of theater than the norm.

“We try to keep as much variety as possible so that they’re prepared to do whatever show they want out of high school,” Dreiling said.

“Sweeney Todd” will be showing in the Vincent Murray Auditorium on March 26-28. This show is not intended for younger audiences.