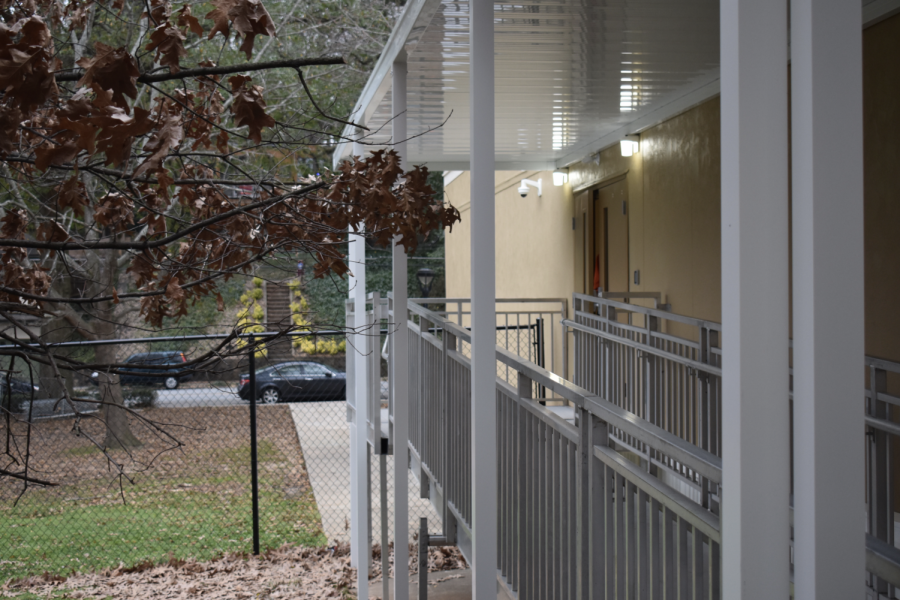 The walkway to the trailers, newly located on the front lawn, stems from the south stairway, creating additional traffic.

Students crowd the hallways shoulder-to-shoulder as they wait for the congestion to clear. Little by little, step by step, they head toward their next class.

The start of the new year signaled a new beginning for students. One of the biggest changes is the new location of the instructional suites, or portable classrooms, commonly called the “trailers.”

The trailers are located on the front lawn near the main entrance of the school due to the construction of an additional building in their old location near the gym. At the completion of the building in June 2021, the trailers will no longer be needed.

The new location has created additional hallway traffic, especially near the south stairway, which students use to enter the new instructional suites.

“Because of the location of the trailers and the significantly worse hallway traffic, they have created, I usually have to wait in line to get to my classes, even though most of them are pretty close to each other,” junior Harrison Green said. “And, getting to and from the trailers has become very difficult.”

The increased traffic has caused inconveniences for numerous students, sometimes causing the seven minutes of transition time to be insufficient.

“With people still adjusting to the new trailers and when there was only one entrance and exit to the trailers, it could take 10 minutes to get from the C400 hallway to the trailers, so I would sometimes be late to class,” sophomore Laine Berg said.

Because of this, the administration created a new policy regarding staircase use. The south staircase, closest to the C200 hallway boys’ bathroom, is the designated up staircase for students to reach the third and fourth floors. The north staircase, by the main office, is the down staircase; so, students are supposed to use this staircase when transitioning to classes on lower floors.

Some students believe the new policy has failed to solve the issue.

“I don’t think the stairway policy really works,” freshman Jasmine Trummel said. “I mean, the only way to really solve the problem is to get a bigger school. With and without the policy, there is still traffic. The traffic just moved from the staircases to the hallways since so many people have to cross entire hallways to get to the right staircase.”

“I have to go all the way down the hall to get to classes that would be in the same area but on a lower floor, and then I have to walk all the way back down another hall,” Washington said.

Despite the crowded hallways and staircases, some students prefer the new trailers, noting the improvements over the old ones.

“Overall, the new trailers are a lot nicer than the other ones,” Washington said. “They look better on the inside and outside. Plus, the bathrooms and hallway make the trailers feel more like an actual building.”

The current trailers consist of one hallway that leads into ten different classrooms. Additionally, they are equipped with bathrooms.

“I like that the new trailers have bathrooms, so then, we don’t have to walk all the way to the [main] building,” Washington said. “It just makes it easier and means students aren’t taking more time than necessary to use the bathroom. Also, students no longer have an excuse to be wandering the halls of the building if their class is in the trailers.”

Regardless of the additional time it takes to transition, Berg agrees that the new instructional suites’ positive aspects outweigh the negative.

“It can be annoying having to wait for longer or having to push through and dodge large crowds of people, but the new policy has slightly lessened the overcrowding,” said Berg. “So, I think the better design and larger classroom space is worth the inconveniences.”