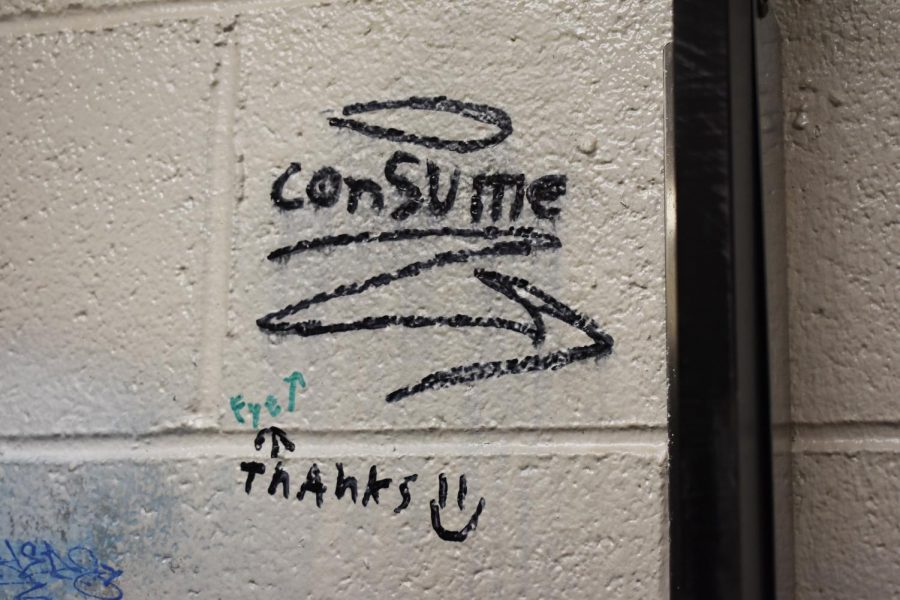 Vandalism, known around campus as tagging has covered bathroom stalls across campus as administration tries to tackle this issue.

The administration has become concerned over an increase in vandalism and destruction of property across campus, particularly in bathroom stalls.

This problem, especially during the 2019-2020 school year, has administrators working to get ahead of the problem.

“Since the school year started, we’ve been having a large amount of graffiti in the boys, and somewhat, girls restroom, but mainly the boy’s restroom,” Rodney Howard, assistant principal in charge of discipline, said. “It’s getting to the point where custodians are removing it on a daily basis, and as soon as they remove it, they are putting it right back. Damages are also being done to the stall doors and sinks in the bathroom.”

While noticing an increase in vandalism, many students note this is not a new problem and have been forced to work around it.

“I’ll try to go to the bathroom in a certain class, and I’ll have to go to three different bathrooms before I can find a stall that doesn’t even all-the-way work, but if I finagled it, I could make it work,” junior Jake Willoughby said. “It’s so bad at this school. I remember there was this urinal in the music hall, that for a year, year and a half, would flood the whole bathroom, and they did not fix it.”

When it comes to enforcement, Howard notes the severity of the issue.

“Vandalism is something that we do not tolerate,” Howard said. “Whether its graffiti on the wall, tagging, tagging of a classroom, things of that nature are very serious. When something like that happens, of course, the school has to react and retaliate and issue consequences for those actions.”

Before discipline is required, many would rather see this problem end through communication, specifically between students.

“If anyone knows who it is, talk to them, talk to your fellow student, your friend, whoever it may be, and say ‘let’s cut out and take it easy with tagging the school and things of that nature,’” Howard said.

Not everyone shares the same view of the issue as administrators. Some students are angry about how tagging is viewed within the school community.

“Tagging is just filling in a blank wall,” said a student who spoke on the condition of anonymity given their relationship with the situation. “In my eyes, I’m making it look better. Who wants to stare at a blank wall? Why wouldn’t you want worlds all over the wall that have their own fonts that you’ve never seen before? It gets your imagination started.”

Similar students are also upset about the correlation that has been placed between tagging bathrooms and destruction of school property.

“I don’t understand how the administration would lump words on the wall with kids ripping off sinks,” said the same student who requested anonymity. “Honestly, when they rip off sinks and doors, it takes away places for me to tag.”

The pressure is mounting to tackle this issue, given the longevity of these actions and renovation plans across the school. A new building is under construction to create more classroom space when it opens in 2021.

Vandalism has been a problem in the past but has seen an increase in this school year.

“Hopefully, we can get ahead of this because we have a new building that is coming up soon, and we definitely don’t want to go into a new building with kids destroying it with graffiti or tearing off a bathroom door,” Howard said.

While enforcement plays a large role in tackling the issue, Howard said students can play a role in reducing the problem.

“We just try to make kids aware that it’s really creating chaos in your own school, which you aren’t taking seriously,” Howard said. “You aren’t respecting your own building. The cleanliness of your own building is something that every kid should want.