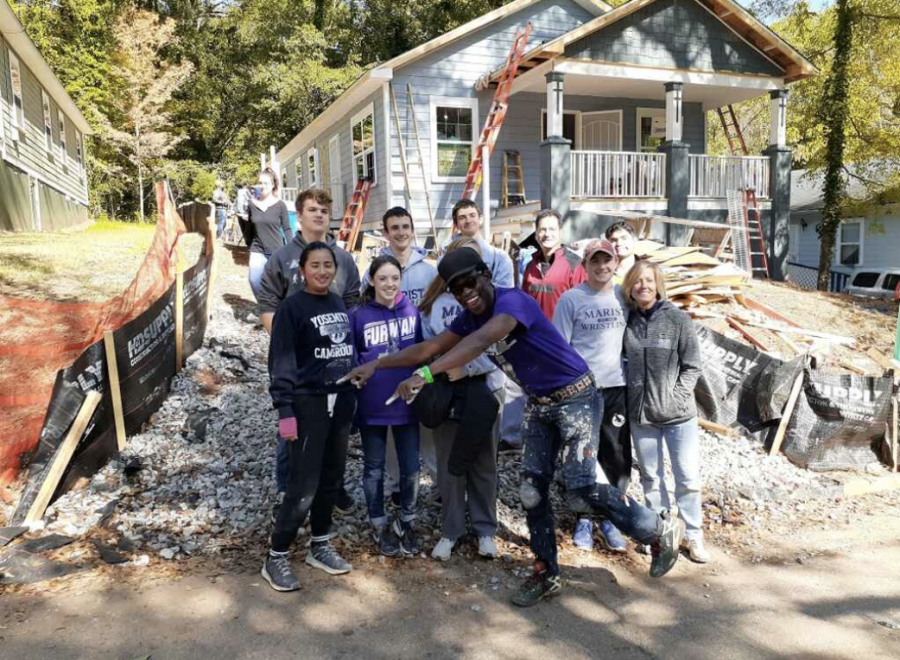 Home buyer Joel Summer stands in front of his new home alongside student volunteers from different high schools, including Marist and Riverwood. Habitat for Humanity has been offering high school builds for many years, and Summer’s was the first one the Grady chapter was invited to attend.

The Habitat for Humanity service club raised over $1,000 this fall to support the organization’s annual high school builds.

Last year, current seniors Helen Moore and Katherine Esterl co-founded the club at Grady. Habitat for Humanity is a global nonprofit housing organization that works in local communities across all 50 states and in 70 different countries.

“We created a small service club to work with Habitat, organize volunteers and fundraise,” said Moore. “It’s a different structure than most clubs because the majority of our meetings are the actual builds.”

On the first day of the home build, the group arrives at the build site with just the foundation for the home. Over the course of eight Saturdays, everything from plumbing to carpentry is installed by volunteers. By the last day, the home is completely finished, including the landscaping.

“Unlike most volunteer work, you really see the work and the impact that you make in one day, and I think that is really satisfying,” Moore said. “Because of this, builds really have a way of bringing people together.”

What makes the Habitat chapter unique from other clubs is the amount of work that is done alongside adults, instead of other teens. Esterl has been an active volunteer with Habitat for about a year, and she rarely encounters any other teens at a build.

“Everyone is always surprised to learn that we are high school kids. That’s one of my favorite parts,” Esterl said. “People think it’s cool, but they are kind of surprised. They ask if we have to be here for school or for a project. They never ask if we are doing it for fun.”

This fall, the chapter participated in its first high school build, alongside students from schools such as Woodward Academy and Westminster.

Habitat builds are almost always funded by a corporate sponsor, such as Delta Air Lines or Spanx. According to Esterl, schools come up with the money that a sponsor would normally donate for high school builds. Over the course of two months, Grady students raised more than $1,000 in donations before the Dec. 31 deadline.

“In order for us to participate, we had to donate,” math teacher and club sponsor Vicki Vinson said. “We had a couple parking lot fundraisers, and Helen and Katherine hosted a camp over the holidays for children that made more than $400.”

The actual build for the home began in November, and high school students worked to create a home for Joel Summer, a former refugee from Zimbabwe.

Summer came to America in 2007. He spent 16 months living in Guinea in West Africa with the United Nations High Commissioner for Refugees (UNHCR) awaiting approval to come to the United States.

Summer learned about Habitat For Humanity through his congregation at Shallowford Presbyterian Church.

Homebuyers are required to complete 250 sweat equity hours, and because of the many afternoons Summer has spent volunteering with Habitat, he is almost finished with his hours.

Sweat equity hours are completed when homebuyers work on their own homes and by volunteering at other build sites. Hours can also include taking homeownership classes or volunteering in a Habitat ReStore, both of which Summer has done. Habitat Restores are independently-owned reuse stores operated by local Habitat for Humanity organizations that accept donations and sell home improvement items to the public reduced prices.

One of Moore’s favorite Habitat traditions occurs on the first day of the home build. The home buyer stands in the front door’s threshold as their home’s front walls are being raised so they are the first person to walk through their own home.

“Mr. Summer was posing in the door and was so funny about it,” Moore said. “He was so outgoing, so excited and engaging. He really did bring the volunteers together, and I have never interacted with any other homebuyer so much.”

After 13 years of volunteering with Habitat after his move to America, Summer knows how much time, work and resources go into building a single home.

“It is so meaningful to me that students took time out of their day and helped me build this home from scratch. They were very beneficial, brilliant, luminous and hard-working,” Summer said. “I can not thank them enough.”