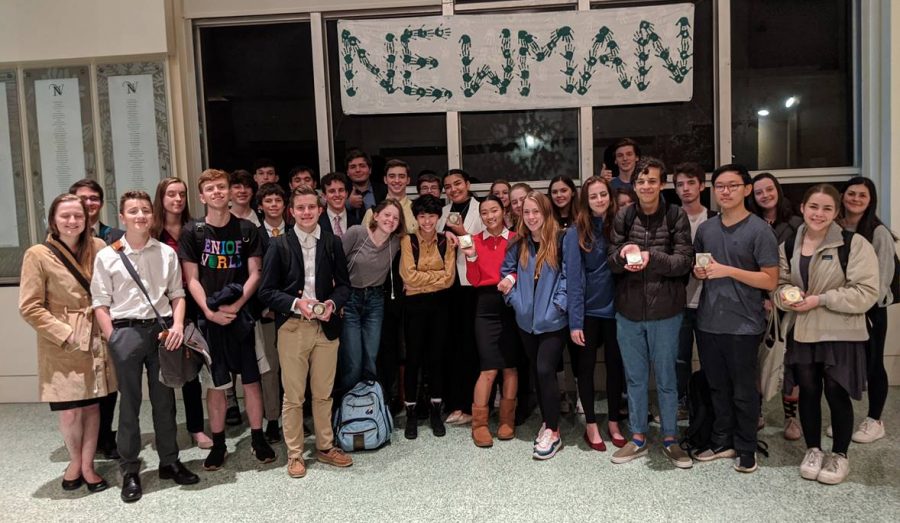 The Jesters debate team show off its awards following success at the Isadore Newman Tournament in New Orleans in December just before the winter break.

Your heart begins to race. Your palms sweat. Your blood courses with adrenaline as you prepare to run away. Then, the lights come on, and the curtain opens, revealing the crowd of onlookers prepared to judge your speech in the court of public opinion.

“I often feel anxious about public speaking,” said Jonas Lösel, a freshman on Grady’s mock trial team. “This fear stems from the fact that I am naturally very introverted. When all of the attention is on me, I often get flustered. Thus, I try to avoid public speaking as much as possible.”

People feel as if their fear is theirs alone and that they are failing at a task where most people succeed. Accomplished public speakers speak as if it is no trouble at all.

“We see speakers, and we listen to speakers that we enjoy, and for whatever reason, we think, `Oh I have to be at that level,’ forgetting that it has taken them years to get to that level,” said Mario Herrera, the head coach of the Jesters, Grady’s speech and debate team.

Public speaking is not a gift bestowed on a select, special few. There are steps that everyone can take to become better at speaking to conquer their fear. Anyone can become an accomplished public speaker with the right practice.

“It’s okay to be scared,” said Herrera. “There are ways that help you become less scared: practicing out loud, making sure you know what you’re talking about, making sure you don’t ramble. Even sometimes things that you wear can help. If you’re wearing something that’s comfortable that helps a little bit. So, there are things you can do to reduce the fear, but the only thing that ultimately makes the fear go away, if it can go away at all, is practice.”

Practicing is the key to being comfortable speaking before an audience. All other techniques are only useful if a person practices enough and speaks regularly. A lack of preparation can lead to a regression in skills and an increase in fear.

“Practice and don’t be afraid to make mistakes,” said junior debater Griffin Richie. “The more you speak publicly and openly, the more confident you will be and the more normalized the process is.”

No one’s first speech is perfect, and almost everyone stumbles along the way. However, the more a person speaks, the better they get at it and the more clearly they express their message.

“I’ve messed up speaking in front of people many times,” said Lucia Fernandez, state champion in Original Oratory. “People are not going to judge you when you’re trying your best. Public speaking is something you’ll get more comfortable doing over time.”

While many people are nervous in the beginning, nerves may not be a bad thing. In fact, a little bit of fear may signal that a person is passionate about their speech and that they care about the message they are spreading.

“I think nerves are good,” said Herrera. “I think when you are nervous, it means it matters. It means that it’s important to you, and so, you want to try to do your best. So I think nervousness can be a motivating factor so I’m still kind of glad that I get nervous every now and then.”

Public speaking is a skill that can reap rewards throughout a person’s life. In many situations, knowing how to speak efficiently and effectively will increase a person’s chances of success.

“It gets you jobs,” said Herrera. “It gets you discounts. It gets you your spouse. It makes your kids listen to you. You get to express ideas in ways that people are more likely to listen to. You get to engage in debates to learn more about the world.”

Everyone must speak at some point in their lives, whether at a meeting or on television in front of millions of people. It is unavoidable. Sooner or later, everyone must face that fear.

“You’re going to have to do it eventually, and you’re not going to hold back,” said sophomore Grayson Abbot, a member of the mock trial team. “You’d rather get it out of the way now when it doesn’t matter, instead of when it’s something important.”