Sleep-Deprived: The relationship between students’ work and rest 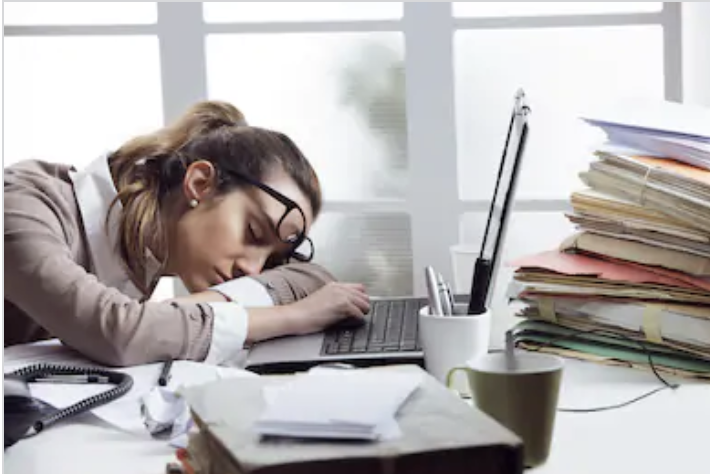 BEEP. BEEP. BEEP. It’s 6:30 a.m., and across Grady High School and America, students are struggling to collect themselves out of bed, and not to reach across the warm covers to their nightstands to slap the snooze buttons on their blaring alarm clocks.

Finally, the last BEEP, BEEP, BEEP. It’s over. The school day has finished, and it’s time to go home. It’s around 4 p.m.

But, the day isn’t over. Not by far. In a normal 9-to-5 job, it’s over at the end of the day. In contrast, education and work continue for students when they go home.

“Some nights, I have such a mountain of work to do that I spend, like, nearly five hours on it,” says sophomore Fritz Goodman, who takes two AP classes and other rigorous honors and advanced courses. “It starts to be a really big drag on the time I have after school.”

High school students are subjected to copious piles of assignments to complete at home, often dragging on late into the night, and absorbing massive amounts of time.

What would have been before a seven-hour day at school turns into what is often a more than 10-hour day of exerting a child’s mind, and then leaving little time for the brain to recover before the process is repeated the following day.

“My sleep time sometimes increases up to four hours or so more on a night when I haven’t had school that day and don’t the next day, like on a Saturday night,” says Goodman. “I probably sleep especially more then because I’m trying to catch up on lost sleep from the school week before.”

Unfortunately, science shows it’s not possible to adequately “catch up” on lost or missed sleep from previous nights. Simply put, once sleep is sacrificed, it’s gone, and although the body will attempt to get it back, the potential benefits of that night’s sleep are lost forever.

“There are two clear outcomes [of missing a night of sleep]. First, and of little surprise, sleep duration is far longer on the recovery night,” University of California-Berkeley sleep scientist, Matthew Walker, said in his book on sleep science “Why We Sleep.” “However, our brain will try to recover sleep, but it is important to note that regardless of the amount of recovery opportunity, the brain never comes close to getting back all the sleep it has lost.”

Some students manage to get by with their work and still manage to feel rested. It can be a challenge, however.

“I do think I usually get enough sleep. Some or most nights, I get close to nine hours,” said sophomore Grayson Abbot. “I do find it challenging some nights to get the sleep I know I need, though.”

Abbot knows he has always needed sleep, and a lot of it, even more than the average teenage student. He said he prioritizes getting plenty of shut-eye, even if it comes at the cost of other things.

“I think I try to find a balance that works for me. I know how much sleep I need to function well, so I plan around it,” Abbot said. “I even put it over grades, and sometimes, I lose time for my extracurriculars or other activities, but that’s the cost I’ll accept.”

However, the modern world can be a tough and unforgiving place, and the difference between the grade on that test, a semester grade in a class, GPA, class rank, the college a student goes to, the job they get, and more, are all decided by very small margins. For some students, the risk of not being in the right spot compared to others is too much, and getting enough rest to feel good and have a healthy brain is something they simply believe they must sacrifice.

“I think that sometimes, it’s a sacrifice I just gotta make,” says sophomore Simon May. “I don’t want to take a risk that I might miss something or not do something my best because I was asleep instead.”

Seven hours a day, minimum. That’s the bare minimum. Then, there’s more. To have a shot at success in life, in a small sense, or larger one, hard work is required. Sophomore student-athlete Drew Gossett knows this.

“I wanna do good things, and to get good grades and do well in the activities I like and the ones that I, well, sorta have to do whether I like them or not,” says Gossett. “But working at things I need to do, regardless of the cost on my sleep or free time, I mean, I kind of feel like I have to in today’s world.”

It can be a difficult balance to find, like balancing a scale with two weights on each side. Only, one side, the school one, has a hunk of lead. Now, what exactly can you possibly do to balance the sleep side? The scale can only hold so much without collapsing upon itself.

“I feel like a lot of the time you just got to choose. One way or another,” says Abbot. “Are you gonna in to the pressures from society and school to stay up and get your stuff done perfectly? Or are you gonna give in to your brain telling you ‘shut up and lay down, I’m tired.’ That’s what I feel like some of this homework does to students.”