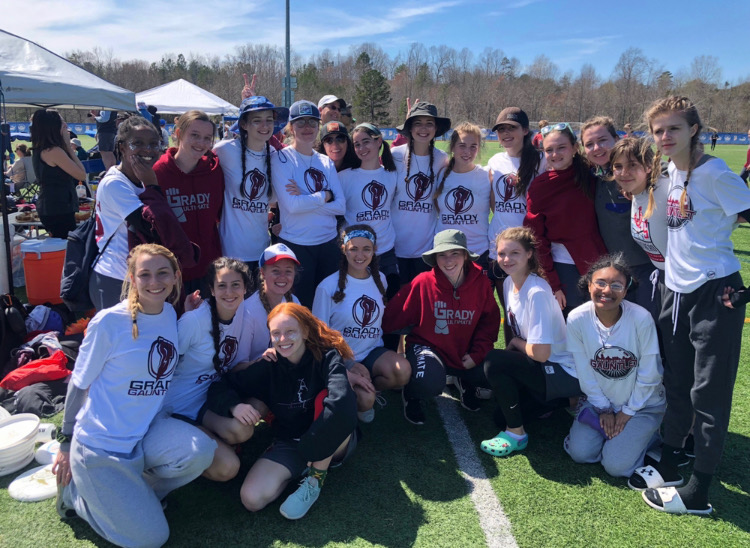 The 2019 varsity girls Ultimate Frisbee was 88 percent white. The dues to play were over $300.

Sports should be the great equalizer. A football, a softball or a frisbee can strip kids of wealth, race and status and pull people together based solely on passion. Fifty eight years after the integration of Atlanta Public Schools, high school athletics should be representative of the possibility of diversity. However, that doesn’t seem to be the case.

Athletic Director Patrick Johnson sees this as a problem for such a diverse school.

“I think that one of Grady’s strengths is that so many different types of people are represented at this school,” Johnson said. “If I could snap my fingers and make it so where each sport depicted that perfectly, then that would be great because that can make for an overall better experience.”

The cause of this divide is based on three major ideas, says Johnson.

“Cost of playing can be a determinant factor in playing sports,” said Johnson, who is also head boys basketball coach. “I think just traditionally who has played a different sport can be a self-perpetuating cycle. Access and transportation go into the decision of whether or not one can go out for this team or that team.”

Johnson and the athletic department are trying to limit these barriers to encourage all students to play any sport, regardless of cost, transportation or past demographic trends.

“One of the big things we have been trying to institute this year has been to bring all of our sports onto a fairly even playing field,” Johnson said. “I think it is important to make it so that cost is never a factor.”

In the past, all sports have had different dues in order to play. These costs varied year by year and coach by coach. This year, Johnson is trying to bring down all playing costs and equalize the costs of different sports in order to inhibit costs from being a determinant factor of which sport a student plays.

In order to solve problems regarding transportation for students who would not be able to attend practices or games off-campus, APS provides buses to transport students to practices at the Walden Athletic Complex or away games.

“I think making every sport welcoming and accessible and evening the playing field as much in all areas [so] anyone who is interested can play, is definitely a worthwhile goal,” Johnson said. “What we don’t want is anyone who wants to play a sport to feel like they are not welcome in that sport.“

Separation of races among different sports isn’t just a Grady problem, nor a high school or collegiate problem. It’s a problem that has existed at all levels of play ever since the integration of sports.

Dr. David K. Wiggins, professor of sports studies at George Mason University, has studied the history of African-American athletes for almost two decades and has theorized reasons for the racial divide in sports.

“You see a large number of African Americans involved in basketball and football and track and field and decidedly less represented in golf and tennis, and what I think of as ‘country club sports,’” Wiggins said. “It has to do with tradition and the long history of it, and there’s not a large number of African Americans who have found their way into ‘country club sports.’”

However, money is not the only factor that Wiggins believes to be an active inhibitor in the diverse integration of sports.

“Overrepresentation and underrepresentation of races in sports [are] not just because of economic factors, it’s cultural,” Wiggins said. “I think young athletes are certainly impacted on who they see on TV.”

For lower-income athletes, which are statistically more likely to be African American, sports that offer greater scholarships can be more enticing. Sports like football and basketball typically have more full scholarships than other sports, and according to Wiggins, this can be a deciding factor for even young athletes.

Wiggins believes that Grady’s attempts to greater diversify sports is a “worth-while” effort.

“I would applaud [Grady athletics] for trying to do that,” Wiggins said. “It’ll be interesting to see what happens to their sports teams. When you bring people together from diverse backgrounds to learn from one another, you learn about different cultures.”

Dr. Richard Lapchick is the director of the Institute for Diversity & Ethics in Sport at the University of Central Florida and the president of the Institute for Sport & Social Justice. Every year, he publishes a ‘race report card’ on professional sports organizations’ racial diversity.

Lapchick proposed the Eddie Robinson rule to the National Collegiate Athletic Association,  which would require institutions to interview at least one minority candidate for head-coaching and leadership positions before making their final hires.

According to Lapchick, this rule would increase minority coaches in collegiate sports and end the “self-perpetuating cycle” of racial separation in sports.

“There’s nothing like the athletic experience to bring people together, and I think the diverse participation in competitive sport is an important one and the possibilities are there to cement friendships and relationships that you might not be able to cement in any other possible situation,” Wiggins said. “Coaches become extraordinarily important in this regard and my immediate response is, if the coaches are buying into it, then maybe it will lead to success.”