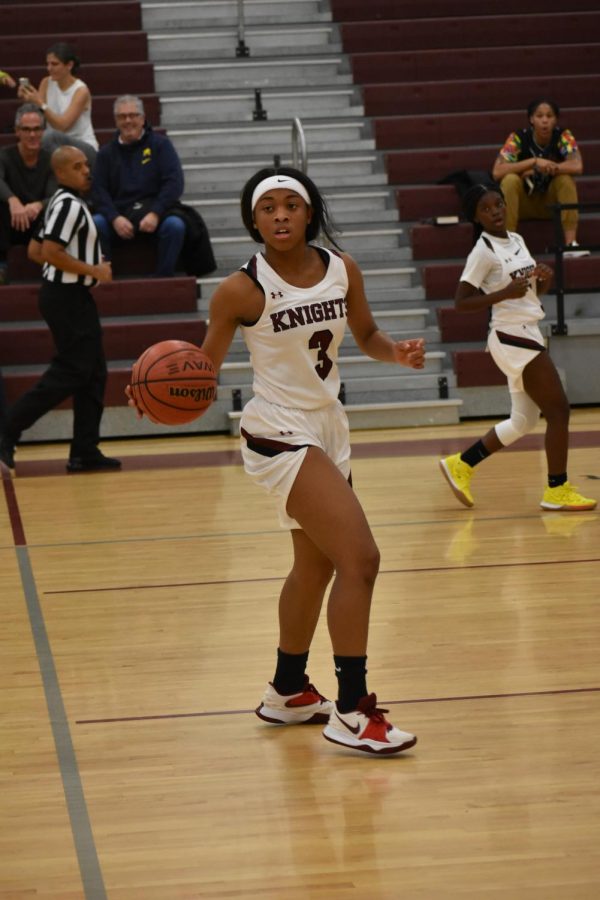 Jaliyah Lett scans the court in transition in a 49-33 loss against Paideia on Nov. 8.

The girls varsity basketball team is looking to improve after a 12-12 record, and a disappointing exit in the first round of the state playoffs last season.

The Lady Knights have started their season 4-4 even with players missing in the first few games. Head coach Roderick Hill believes the teams record should be better.

“We didn’t have a full roster the first few games so I think our record could be a little better,” Hill said.

Though the Lady Knights have four losses this season Hill believes the quality of play in some of the games does not correlate to their record.

“We’ve had some good games that we have lost,” Hill said. “For example, against Roswell (Nov. 25) we played really well, scoring in the 70’s.”

The coaching staff received a new addition in junior varsity head coach and varsity assistant coach James Taylor. Coach Hill believes Taylor has played a vital role in giving the girls a new perspective and more confidence on the court.

“He has been a positive light during practices and games,” Hill said of Taylor. “He has provided the team with a large amount of energy and new perspectives.”

Taylor also brings “discipline” to the team, according to senior captain Jaliyah Lett.

“He has really kept us grounded, and he never lets us take a play off,” Lett said.

Another addition to the team has been Senior Kaitlin Palaian. Palaian has brought much needed athleticism and physicality as she did back at Inman Middle School, also playing under Hill.

“I coached Kaitlin back at Inman in 8th grade,” Hill said. “She is well conditioned, she is probably one of our best athletes.”

Palalian is the “workhorse” of the team as she is the team’s main rebounder and gives it her all every play.

“She runs like a gazelle,” Hill said. “She rebounds well, she brings energy every play so just to have her on the team has been a great addition.”

Hill stressed the importance that experience plays in the team’s success.

“This year the girls are more experienced, mature and comfortable on the court, which I hope will correlate to more wins,” Hill said. “We have a lot of freshmen who have become sophomores. which is beneficial because they now have that one year of experience.”

Because of a lack of depth, Hill is offering boys community service hours to practice with the girls team. Hill thinks this could narrow the gap in skill level between the starting five and alternate lineups.

“Our first five are very talented. However, there is somewhat of a drop-off in talent on our second line up,” Hill said. “To make practice more competitive, I am trying to find creative ways to get the girls to compete.”

The team has set its eyes on the toughest teams this season, for most players, these are the teams that stand in the way of a hopeful state championship.

“Maynard [Jackson] and Lithia Springs are going to be really tough teams,” Lett said. “So, hopefully, we can beat them.”

After two games and practices five days a week, junior captain Trinity Lewis can already see chemistry growing as a result of high expectations preached by the coaches and executed by the players.

“The coaches are hard on us during practices to encourage us to do better,” Lewis said. “Also, our starting five has great chemistry, including my sister (sophomore Jade Lewis) and I.”

For sophomore Jordyn Bumgardner, she believes the team has improved greatly from when the season started to now.

“I think the first games were a little rough,” Bumgardner said. “Our team is finally finding our chemistry with each other and now we’ve been doing really good lately.”