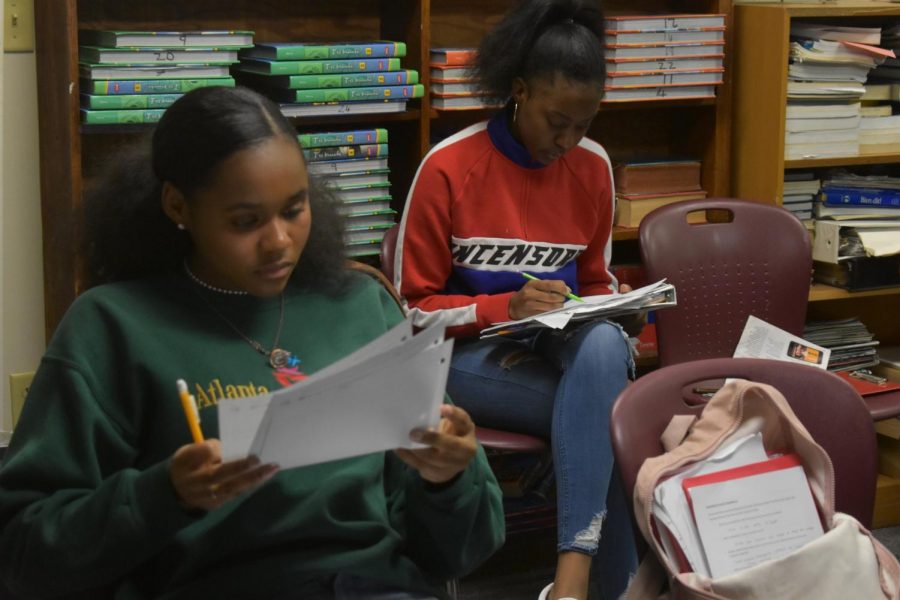 Sophomore Kyla Pate and classmates work on a French assignment. Many of the French students participate in French club to further their experience.

Many schools require students to take at least one foreign language course because of its various benefits.

According to the American Council on the Teaching of Foreign Language, learning a language supports academic achievement, improves cognitive skills and develops a more positive attitude towards foreign cultures.

Grady requires students to take a minimum of two years of the same language to graduate. Students may choose to take Latin, French or Spanish, although some observe that the pathways provide unequal opportunities.

“From my experience at Grady, I hear about how amazing the Latin and French teachers are, but I rarely hear people talking about Spanish, nothing good or nothing bad,” sophomore Annie Robinson said. “I’m not really sure why, but I think it’s displayed through Spanish not having a club.”

There are numerous clubs at Grady, which includes Latin and French club. However, Grady currently lacks a Spanish club. Spanish teacher Enoch Gill notes that there was a club for the first 10 years he taught here.

“[During the club] we would go to restaurants of different Hispanic backgrounds along with other activities to learn more about their cultures,” Gill said.

Similarly, the Latin and French clubs help immerse students into a different society and learn about the history behind the cultures; it allows students to practice their skills outside of class.

“French club allows us to better know the culture by watching movies, listening to French music and best of all eating French food,” sophomore Daniela Restrepo said. “We just overall have a good time, in a good environment with good people. ”

Robinson participates in both French and Latin club, regardless of not taking Latin, meaning anyone who wishes to can join. It gives her a chance to learn more about Roman society, a topic she finds interesting.

“In eighth grade, I didn’t know if I wanted to take French or Latin,” Robinson said. “I heard about how great the Latin program is but also wanted to learn a language I could use to communicate. I decided to take French, but I joined Latin club to still be able to learn about the culture.”

“People often don’t want to admit when they’re interested in a language or specific culture,” Fernandez said.  “I also think that it’s hard to get a club started and plan in the beginning stages.”

Regardless of the challenge, juniors Isabella McDonald and Addison Berreth have started discussing the initiative of starting a Spanish club with Spanish teacher Liliana Ortegon.

“I want to start a Spanish club because I think it is pretty odd that Grady doesn’t have one considering the popularity of the language,” said McDonald. “I realized that we have club forFrench and Latin but for some reason not a Spanish club.”

Although still in the planning stage, McDonald reflects on the possible activities and how they would add to students’ learning experiences.

“We’re thinking we could have fiestas, go on field trips to places like Plaza Fiesta, watch Spanish movies, and learn more about the culture,” said McDonald. “In addition to learning about Spanish, it would help students by bringing them together with others who have a common interest but are in different courses and grades. It also allows people to explore more opportunities for colleges and scholarships.”

Ortegon recalls the lack of student interest in past years and her excitement for students who seem enthusiastic to spend more time understanding the culture and language.

“Whatever time spent outside the classroom that involves the language is for their benefit, so since they want to do it again, it’s something that I want to consider,” said Ortegon.

With the possibility of a Spanish club, past and present Spanish students recognize the positive aspects of a Spanish extracurricular.

“I believe that students truly wanting to learn the language could benefit from extra time to speak it, as well as immersing themselves in the culture through fun activities, such as making food, celebrating traditional holidays, and more,” said senior Lucas Cowden, who completed the pathway last year. “If someone started a club, I think it would improve many students’ skills, and as a result, many would join.”