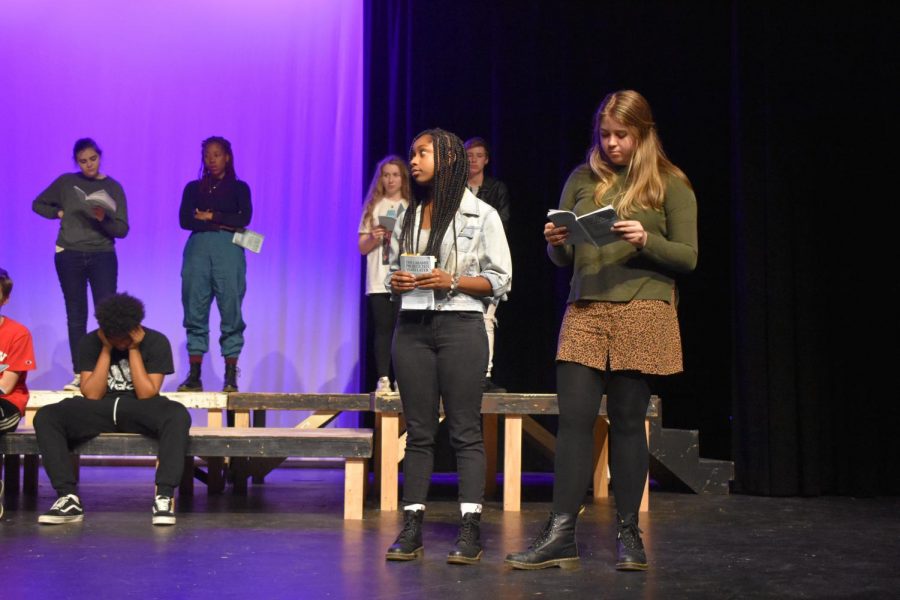 Seniors Madison Ford (front left) and Eden Artelli (front right) rehearse a scene during which legislators debate the Defense of Marriage Act, an act defining marriage as between a man and a woman. The act was ultimately struck down, which was viewed as a victory in the wake of Matthew Shepard's murder.

The murder of Matthew Shepard is unfamiliar to many teenagers today, but with the production of the play “The Laramie Project: Ten Years Later,” AP English Language and drama teacher Lisa Willoughby is familiarizing students with the case.

“Over the summer, I read a story in a newspaper about a trans individual who was attacked and beaten and killed, and then later in the summer, another trans individual was killed, and the first thing that came to me when I heard that was, ‘Oh my goodness, Matthew Shepard is happening all over again,” Willoughby said. “The more I thought about it, the more I thought, ‘You know, I’ve always wanted to do this show.’”

The play, originally written as a follow-up to “The Laramie Project,” follows the return of the Tectonic Theater Project to Laramie, Wyoming, where Aaron McKinney and Russell Henderson brutally murdered Shepard in 1998 because he was gay. Tectonic produced “The Laramie Project” in 1999 to interview Laramie residents and examine the homophobia that surrounded the crime and followed up in 2008 with “Ten Years Later” to explore how Laramie had changed since then.

Willoughby originally wanted to do “The Laramie Project,” but she said that the script involved too many “hateful” characters.

“I felt really uncomfortable representing that part and asking a student actor to represent that kind of character,” Willoughby said. “Then I discovered, in the process of looking at it, that there was a show that was ‘The Laramie Project: Ten Years Later,’ and it solved that problem.”

However, there are still many characters in “Ten Years Later” who present challenges for the actors, especially the roles of McKinney and Henderson. Senior Kai Mehra and sophomore Owen McCoy play these characters, although Willoughby allowed actors to opt out of those roles during casting.

“I hate the character I’m playing [McKinney]; he’s a terrible person, which I already knew going in, but the whole point of my scene is that I have no remorse,” Mehra said. “Every bad thing you can think about a person, this guy kind of exemplifies. That makes it challenging to play him, but it’s an interesting challenge.”

Willoughby received a cancer diagnosis before the school year started and has since been undergoing treatment, causing her to miss rehearsals for a month. She had time to cast the show before she left and credits the older students involved in the play for helping keep it on track.

“I got my cancer diagnosis, so I knew that I had to be out for a period of time to get treatment,” Willoughby said. “This was a play that I could do in chunks so that it would be possible to be out for a month … Having experienced actors who are not just [acting] but stepping up … that has really helped during the course of the treatment.”

The scenes in the play present various scenes relating to the event without any particular order. The type of theater used in the play is unfamiliar to most of the actors, but this difference provides opportunities to expand their acting repertoire.

“At first, I wasn’t really sure how the play [formatting] would work out, but I think it really works well for conveying what the show’s trying to put across,” senior Sovereign Jones said. “There’s something about it that really stands out, so I actually really like it. It makes the play more emotional.”

Like most of the actors, Jones portrays multiple characters, including Susan Swamp, a theater professor, and Rebecca Hilliker, the head of the theater department at the University of Wyoming, which Shepard attended. Senior Maddie Thorpe says that playing multiple characters was an adjustment but gives her a better understanding of the play.

“Personally, I like it because it gives us insight into more than one of the many perspectives about the crime,” Thorpe said. “My characters are both much older than me, so it’s often very difficult to physically get into character since the movement of a teenager is very different from that of 40-something-year-old women.”

Though “Ten Years Later” has its challenges and tackles intense topics, its overall message is positive.

“Seeing the progress made after the case, inspired by it, shows that there’s a light in the dark,” Thorpe said. “As much as this show scares me as a queer person, it makes me very thankful to live in an environment where I can be accepted so broadly, and it makes me proud to be a member of the [LGBT] community.”