Chorus collaborates with the Atlanta Symphony Orchestra on “Movies in Concert” 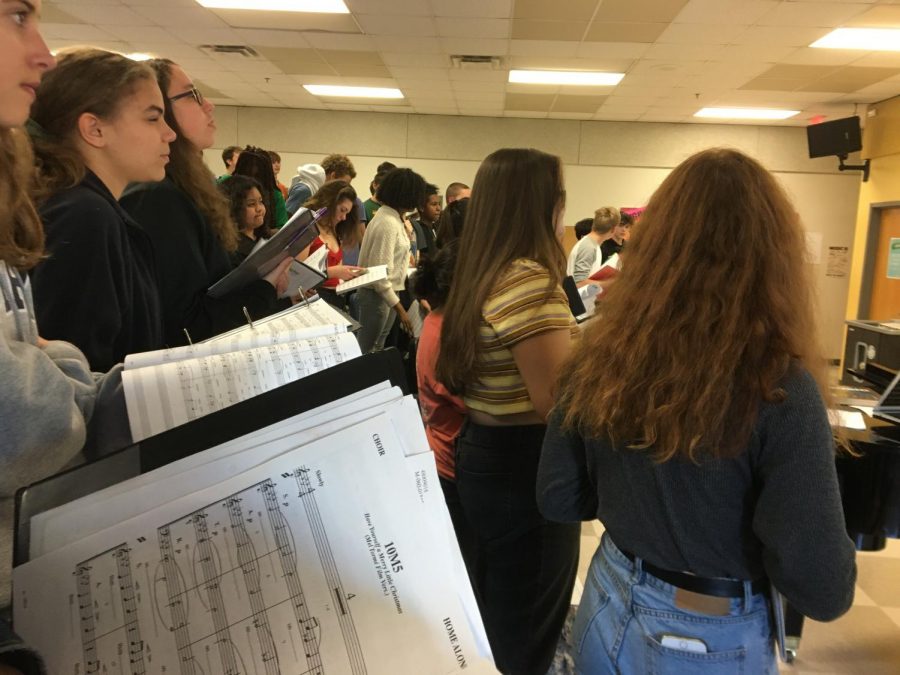 Grady chorus students stay after school, to practice well in advance of their next "Movie in Concert", "Home Alone".

Classic movies, the Atlanta Symphony Orchestra and the Grady Chorus.

What do they have in common?

Twice a year this odd triplet comes together to make movie favorites come to life. The Atlanta Symphony Orchestra created “Movies in Concert” nearly five years ago, partnering with the Grady chorus.

From “The Night before Christmas” to “Jaws,” the ASO has picked popular titles with complex music.

“We started when the current seniors were in eighth grade, so they sang with us, but I think before then they (ASO) must have done it (movies) one or two times,” Grady choral director Kevin Hill said.

The collaboration was initially created to spark more public interest in the city orchestra.

“It became a trend maybe a decade or so ago,” Hill said. “That symphony orchestras in major cities wanted to branch out and bring bigger crowds in.”

Demand for classical music in concert has been in decline and orchestras nationwide have been taking innovative approaches to draw in larger crowds.

When first experimenting with new show ideas, the ASO invited Grady to add a sense of community to the performances.

“We started doing the Very Merry Holiday Pops concerts about seven years ago,” Hill said. “In December, they have a whole bunch of holiday Christmas concerts, and this was one in a series.”

The concerts had many working parts.

“It was choir, orchestra; it would have the solo artists that would sing as well,” Hill said. “The first year we did it [2012], it was with the voice of the ‘Little Mermaid’ [Jodi Benson].”

However, the concert series was canceled two years ago to make way for a new innovation: “Movies in Concert.”

Blockbuster favorites are taken and edited free of their original soundtracks. Then the music-less skeletons of movies are given to the orchestra along with sheet music. The orchestra then works on perfecting the soundtrack.

But what about scenes with singing in the background? This is where the Grady chorus comes in.

Although the choral portions of movies usually go unnoticed by audiences, a lot of work goes into them, Hill said.

“This was challenging stuff, so we did a lot of practicing in class,” Hill said. “We had two practices after school to combine everybody, and then we did a dress rehearsal with [the orchestra].”

“We had some singers from Georgia Tech who joined us as well, which kind of added to the whole sound of the choir,” Hill said.

The exposure to the large venue the orchestra offers is beneficial to aspiring professional singers, one chorus member said.

“I think this is a great opportunity for young singers because of the exposure to such higher level music,” Madison Ford, senior and chorus president said. “It allows them to gain experience in a more professional field early on.”

Young singers like sophomore Madeline Moye understands the magnitude of the opportunity.

“Well, we’re a high school chorus performing with one of the best orchestras in the country,” Moye said. “I loved seeing all the professionals play so perfectly, but it was difficult to perform on their level.”

As these events have grown, the professional bond between Grady’s chorus and the ASO has become stronger, Hill said.

“I think we have a good relationship with them; I think we’ve proven that we can kind of hang with them, and do a good job,” Hill said. “So, for the foreseeable future … they’re talking about maybe doing “Polar Express,” which has a really cool soundtrack and lots of cool bits, so that would be fun to do.”

Hill is thankful for the partnership with ASO on  “Movies in Concert.”