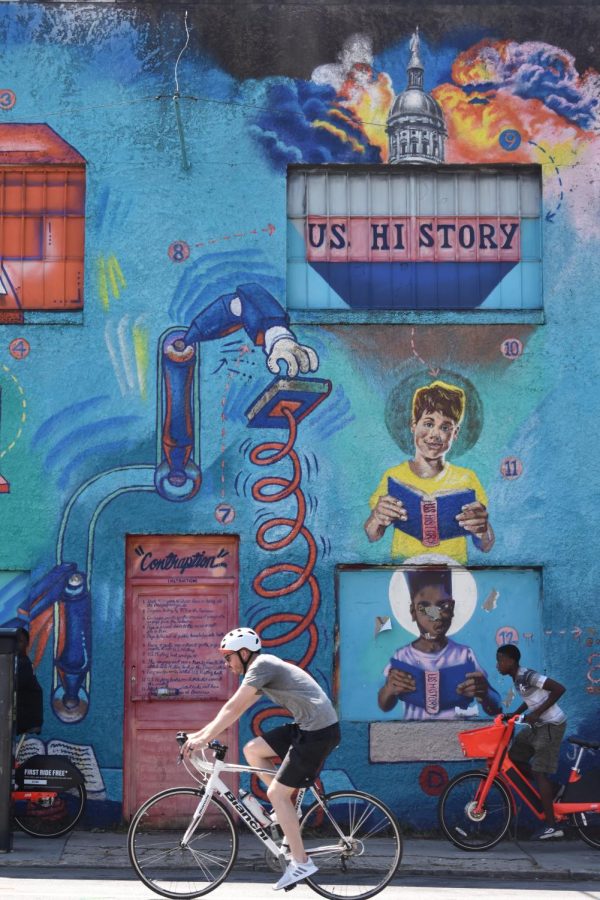 "Paragraphalizer," a mural painted by artist Fabian Williams, is a part of the "Contraception" collection is on Edgewood Avenue. He painted an image to resemble how African American history is often lost in textbooks and education.

Fabian Williams is a local artist who painted a mural on Edgewood Ave known as “Paragraphilizer” which is apart of a broader spectrum of murals known as “Contraception.”

What was the inspiration behind your Paragraphalizer mural on Edgewood Ave?

“Around the time that I created the Paragraphilizer mural, my son was 8 years old. When I was 8, I was in my social studies class, and we were talking about George Washington and how he faced a moral dilemma in that he had slaves and lied about it. And he treated the slaves bad but 8 year old me was like, “They were slaves.” So I decided to do a mural of the miseducation of the black man. I wanted to make a mural, like a satirical example of how African American literature and contributions are reduced to a paragraph of history.”

Is Paragraphalizer a collection of other murals that you have?

“I did maybe four to five murals that are somewhat similar to the Paragraphalizer. One of them is still up in East Atlanta, but the other 3 were painted over.”

Is the inspiration for all of the murals in the “Contraception” collection similar: the miseducation that you got and that people get as African American youth?

“It is a concept I use to deconstruct the narrative. Specifically, the one I did in East Atlanta is an example of how money influences politics.”

How do you normally get your inspiration for the paintings that you do?

“I read a lot, but a lot of my inspiration is from just sitting and thinking and trying to think of ways that people would perceive the work that I’m creating. If I wanted to drive a point on what’s the best way to reach them, I would think about that.”

Are your murals usually focused on the African American community, like portraying something about that or trying to inform people about something?

“Sometimes, I just want them to feel what I’m talking about, but normally it’s educational or sometimes it’s just about Black people in a political state.”

For the ones that are educational, how do you, in the mural, portray your message in the moment as someone is driving by in their car?

“I think about how they may interpret it when they are driving down the street and listening to music, ‘What would catch my attention?’ When I am painting, I think about the different types of colors that would make them notice it.”

Where do you usually do your murals?

“I have a few around Atlanta, but I’m starting to travel more and more to Oklahoma and Miami. That’s my next stop- LA. I’m going to start moving around.”

How has your background influenced the message that you try to portray when you paint?

“My background is in advertising, so I know how to deliver my message in a neat package. The thing about painting is that you’ve got about 3-4 seconds to deliver the message. I like to think about the person from the car’s perspective and how are they going to perceive that message.”

Do you have any upcoming mural ideas?

“I want to do the climate activist, Greta Thornberg. I want to do an environment and global warming one because that’s kind of the most pressing issue of our time.”