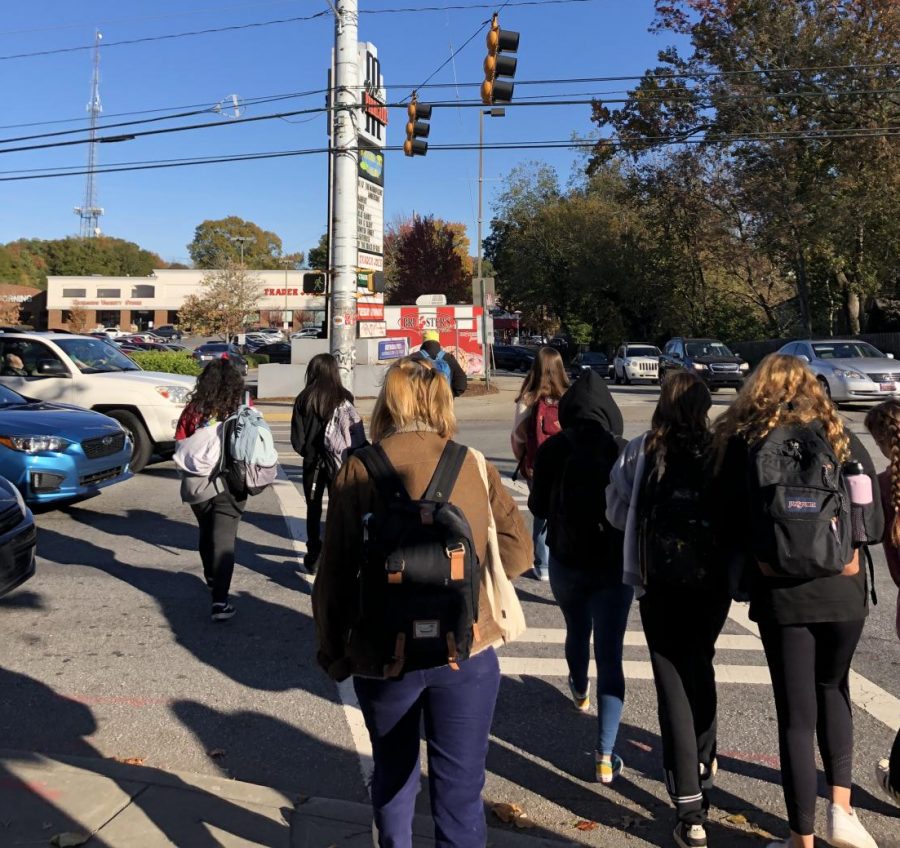 Students cross busy intersection after school at the corner of 8th Street and Monroe Drive.

Crowded streets, impatient drivers and busy intersections. It’s 8:15 a.m. on a school day, and traffic is something students and staff at Grady must face every morning.

“Grady is in a particularly intense location to the point where when I first drove around the school, I couldn’t actually believe how vulnerable students were to the traffic around the campus,” said civics teacher Christopher Rhodenbaugh. “It seemed remarkably unsafe, even prior to working here.”

Rodenbaugh has biked to school every day since he began working at Grady this fall. Before moving to Atlanta, Rhodenbaugh lived and taught in New York, where he also biked to work every day.

“Over and over again, it seems that the areas around our schools are more designed to promote people getting somewhere two minutes faster than promoting the safety of students and staff,” Rhodenbaugh said. “That is fundamentally unacceptable.”

Atlanta Public Schools and the Atlanta City Council are working together to install speed cameras in school zones to make areas around schools safer.

“The cameras are intended to create a deterrent to speeding and increase driver awareness of pedestrian safety,” Superintendent Dr. Meria Carstarphen said.

The cameras will monitor car speeds and capture license plate numbers of any vehicle driving more than 10 mph over the posted limit on school days. Violators will receive a police-approved ticket in the mail. Speeders must pay $75 for their first violation and $125 for each additional violation.

Despite the cost of getting caught speeding, some students have their doubts about how effective a deterrent the cameras will be.

“I’m not so sure speed cameras would be super effective,” said sophomore Dorien Laurens. “Awareness is important, knowing that the cameras are there.”

Laurens started biking to school in September. She is forced to take side streets to avoid the busier streets.

“I also don’t know how much people would care about the cameras, especially because of the busy [10th Street and Monroe Drive] intersection,” Laurens said. “A lot of people have places to be. I think we need more crosswalks and eye-catching things. Cameras are not very noticeable.”

Rhodenbaugh thinks the speed cameras do have the potential to reduce dangerous driving habits, and reinforce existing driving laws. However, he agrees with Laurens that additional changes need to be made to make school zones safer for everyone.

“I think not only do we need speed cameras because there are clearly people who get away with speeding on these roads,” Rhodenbaugh said. “We also need to reduce the speed limits across the city of Atlanta, particularly in school zones. There needs to be a lot more signage and lighting.”

Dr. Carstarphen said she recognizes the importance of having a variety of road safety features to ensure the protection and well being of pedestrians. The cameras will be an additional safety measure, she said.

“At locations throughout the district, we already have officers directing traffic, crossing guards, and other traffic control devices installed by the City of Atlanta and the Georgia Department of Transportation,” Dr. Carstarphen said.

For many students involved in extracurriculars at Grady, the school day isn’t over after the bell rings at 3:30 p.m.

“No matter what time I leave, there are young people and staff coming and going from this campus,” Rhodenbaugh said. “They should not be at the mercy of full-speed traffic as soon as they exit school grounds.”