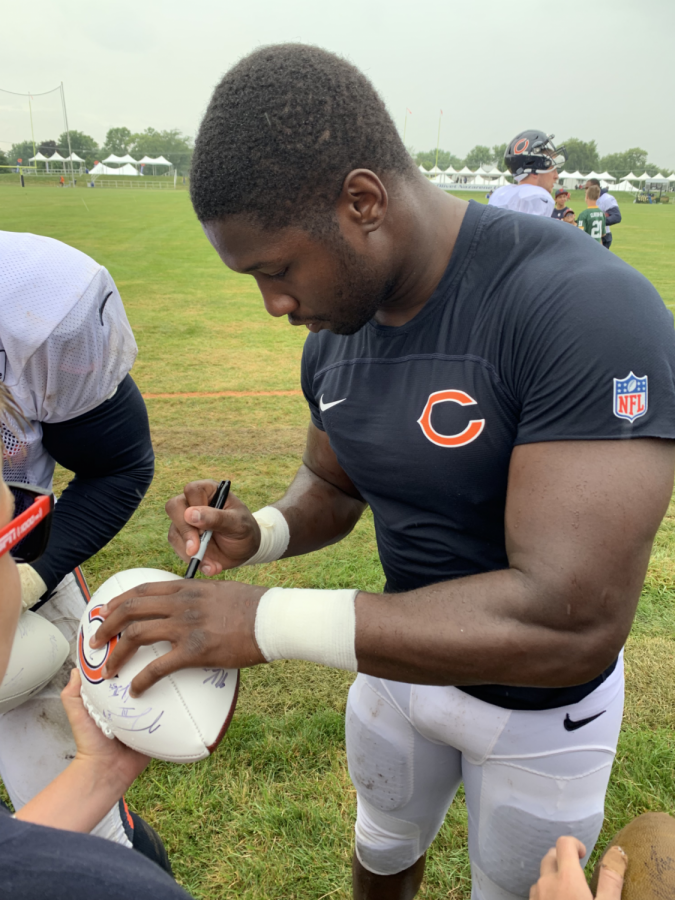 Simons started his autographing business, “Atl Graphs,” his freshman year. Inspired by the prospect of making money and meeting celebrities, he set out to build his own autographing empire.

“I’ve come a super long way because a few years ago, I’d be at the games with 8×10 photos, but now we’re doing jerseys and basketballs,” he said.

He’s gotten autographs from a wide array of celebrities, from comedian Eddie Murphy to two-time NBA champion Stephen Curry of the Golden State Warriors, former NFL  MVP quarterback Peyton Manning of the Indianapolis Colts and Denver Broncos and rapper Quavo. But he says at this point, he rarely gets star-struck.

“[Quavo] always hooks me up,” he said. “I’ve probably gotten him like seven times, and he’s super nice every time.”

Junior Sam Rose is also in the autograph business. He launched a similar startup to Simons called “Sosa Graphs” during his freshman year. After obtaining and reselling autographs for two years, Rose, alongside Simons, has established a community of fellow “graphers.” The two attend events together to get autographs and help each other grow their businesses.

The uniqueness of the students’ revenue stream makes for more interesting work than usual high school jobs of babysitting or fast food.

“Instead of having a miserable job, we’re having fun and making good money while doing it,” Rose said.

Early on in the process, both Simons and Rose relied on support from their parents to get access to events and acquire transportation.

“Before Sam could drive, I was his driver in getting him to games,” Susan Rose, Sam’s mother said. “I also paid for a number of Hawks games for him. I also took Ari and Sam to the NBA All-Star game back in February in Charlotte, North Carolina, which was a big deal.”

Simons says a lot goes into the process of autograph flipping. He spends hours combing through statistics about “valuable” soccer, basketball and baseball players and actors. For famous athletes, he looks at injury statistics and weighs how those injuries might affect sales. For celebrities, he researches up-and-coming stars and reads about Hollywood favorites. Rose helps Simons with this process.

“Especially for upcoming players, like high school players who are going to be top players in college and then top picks in the NBA, you have to do research on that because it’s not general knowledge,” Sam Rose said.

After he’s established a target, Simons gets tickets to a sporting event, a signing or slips into a local movie set to get access to the celebrity. He then “gasses up” the celebrity by praising them, in order to get them to sign a pennant, jersey, ball or shoe. After he obtains the signature, Simons ships the signed item to an authentication company based in California.

Rose and Simons say they’ve grown their businesses through two core elements: experience and the community of fellow autograph chasers, including mentor and small-business owner Nick Radosta, who has had an Atlanta-based autograph business, “Siiacck Sports,” for three years.

“I’ve kinda taught Ari a couple of the ins and outs of the game, and he’s picked up quickly,” Radosta said.

Radosta met Simons when Simons first entered the business. Now, two years later, Radosta and Simons work together to mutually benefit their businesses. Radosta gets information from valet drivers and hotel staff about the whereabouts of celebrities. He then employs Simons to collect autographs.

With this relationship, Simons can keep making money while eliminating the complications of a middle-man like eBay. From here, Radosta holds onto the autograph until he can sell it on his website for maximum profit.

“He’s a real go-getter,” Radosta said about Simons’ work ethic. “Ari’s not afraid to talk to anybody, I’ll tell you that. That’s what really separates him … It doesn’t matter if it’s 20 bucks, 50 bucks, 100 bucks, he’s out there getting after it.”

Simons says he and Rose are some of the youngest in the game, but they use it to their advantage.

“People are more prone to sign and look out for younger people, as supposed to older people like myself,” Radosta said. “Say an athlete sees young Ari, just hustling with a bunch of basketballs. They’ll be more than happy to knock some more out for Ari because he’s young and hustling in the game.”

Simons says that although the industry is profitable, it can be a gamble. For athletes, injuries can ruin sales. For celebrities, something as small as a rumor can plummet the value of an autograph.

Susan Rose says it can be difficult for Sam to be in a business where age-wise, he’s underrepresented.

“It took me a bit to understand what they were really doing,” Ms. Rose said. “I’ve learned along the way. As a parent I would say that the pros are they are definitely learning how to run a business, learning how to network. They are learning how to be patient because there is a lot of waiting around, and they are also learning how to jump into action quickly when they hear something. The cons are not knowing who exactly Sam is working with, talking with or dealing with,” she said.