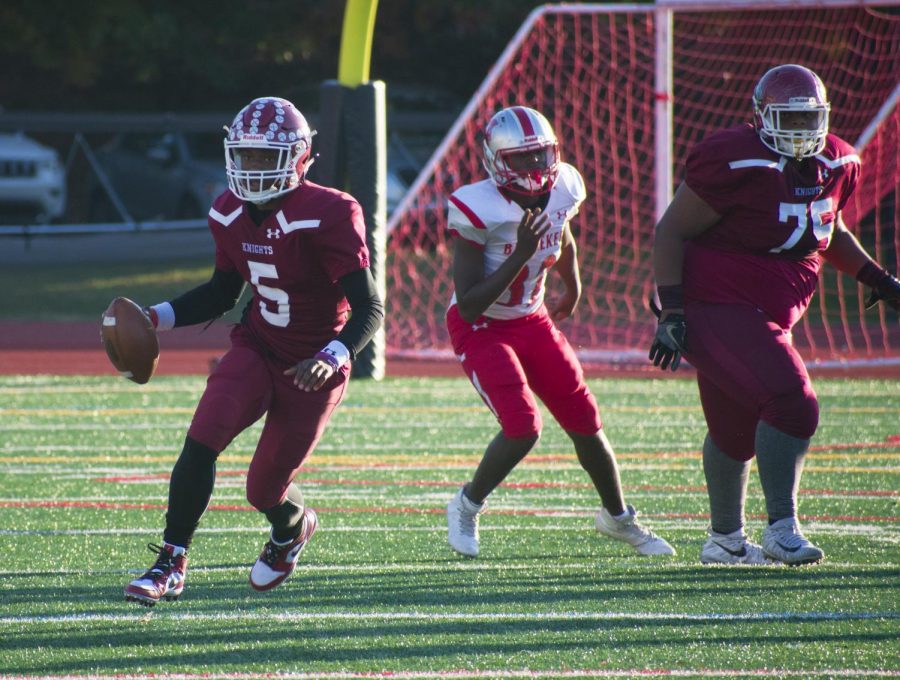 Senior QB Aquinas Stillwell scrambles outside the pocket for a first down. The Knights would end up losing 38-27 losing their playoff hopes.

Banneker handed the Knights their seventh and final loss of the season, 37-28.

The Trojans used their dominating run game to out play the Knights and lead from start to finish. Grady stayed close throughout. Banneker put the game away with a fourth down score late in the fourth quarter.

“Our strategy going into the game was to stop the run, but we didn’t do a good job of it,” head coach Kevin Clark said. “Our biggest downfall for the season was just a bunch of missed tackles.”

The Knights started the game on their own 40 yard line and were driving until a costly sack of quarterback Aquinas Stillwell and a holding penalty ended the drive. Banneker blocked the punt to set up in scoring position.

The Trojans capitalized, using only three plays to drive 47 yards, highlighted by a 26-yard touchdown run, to go ahead 6-0.

The Knights’ next drive ended with a failed fake punt that gave Banneker good field position again. However, Grady’s defense forced a muffed punt, giving the Knights the ball at the Trojans’ 35 yard line.

The Knights started at the Banneker 35 but would go three and out to punt the ball Banneker’s 23 yard line.

Banneker’s offense came out strong on the Trojans’ third drive, going the length of the field to score. Banneker led 13-0 with 11:17 left in the second quarter.

The next few drives were continuous three and outs until Grady got the ball with 7:23 left in the half. The Knights started at the Banneker 35, and took advantage of the short field to score when Nathaniel Wiggins took a wildcat snap for a 2-yard touchdown run to pull Grady within 6 points at 13-7.

Banneker opened the second half with a 55-yard run on the second play, putting the Trojans on Grady’s 5 yard line. They capitalized on the drive with a 5-yard quarterback sneak. Banneker missed the extra point, however, to lead 25-14.

Grady came back strong, starting the drive with a 56-yard kick return by Wiggins, setting the Knights for a 12-yard Stillwell touchdown pass later in the drive to senior wide receiver Alvin James. The extra point cut the lead to just 4, as Banneker lead 25-21.

Banneker’s next drive resulted in a 10-yard rushing touchdown, immediately following a 57-yard break-away run. The Trojans pushed their lead to 31-21 with 7:05 left in the 3rd quarter.

The Knights attempted a comeback, but after a groin injury took Wiggins out for the rest of the game, Grady fumbled the ball on Banneker’s 38.

Hope was not lost for the Knights, as a 50-yard pass bounced off a Banneker receiver’s helmet and was  intercepted by senior free safety Titus Turner, giving Grady the ball with 4:18 left in the quarter. The possession did not lead to a touchdown, but the interception stopped Banneker’s momentum.

After multiple three and outs by both teams, Grady started on its own 6-yard line following a Trojans punt. James scored on 72-yard passing touchdown reception from Stillwell, cutting the score to 31-28.

A failed on-side kick attempt gave Banneker the ball on Grady’s 40 yard-line,  and the Trojans scored on a 20-yard pass to seal the margin of victory, 37-28.

“Missing the playoffs hurt. To have it so close to you, you think it’s right there within your grasps; it was a win-able game for sure,” Clark said. “It’s one of those things you learn from, it’s a teachable moment.”