There’s a method to the madness 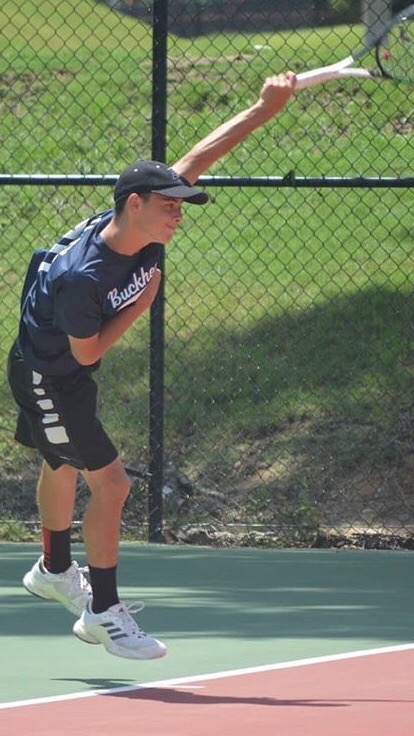 Scott Whitley serves to an opponent during a tennis invitational in the spring of 2019. During the spring, almost every day of Whitley's week is taken up by sports -- either tennis or ultimate.

After practice, most Grady tennis players pack their bags and head home. But not sophomore Scott Whitley, who changes into his cleats; he will only be 15 minutes late to ultimate frisbee practice.

The same goes for senior Elijah Whigham, who runs track and plays varsity lacrosse. During the season in the spring, after an hour of sprints and hurdles practice, he leaves the track and heads for his lacrosse game across the city, where he plays for 45 minutes.

Playing multiple sports, especially at the varsity level and in the same season, may seem ambitious. In this day and age, athletes often specialize in a single sport at an early age than they have in the past. Some athletes are starting to specialize in a single sport as early as age 5, 6 or 7, said Dr. Robert Zayas, executive director of the New York Public Schools Athletic Association.

Dr. Zayas said it’s important that athletes try different sports to learn how to adapt and work with different types of people for life after school and after their playing days. If a soccer athlete, for example, only plays for the soccer team and for one coach, that athlete may have a difficult time taking direction from a different coach after high school, Dr. Zayas said.

“The goal is for them to play multiple sports when they are still younger,” Dr. Zayas said. “They will learn to work with a different team and a different coach.”

Dr. Zayas said the biggest challenge for multisport athletes playing on two teams during the same season is time management and not falling behind on school work. He added that he has a 12-year old daughter who competed in competitive cheerleading and basketball in the same season, and she found the experience challenging.

“It was taking a toll,” he said. “Playing two sports can be difficult.”

The athlete who plays multiple sports at the same time is ultimately forced to make choices and sacrifices, Whitley said.

“I really don’t like having to give up opportunities like other sports, clubs and activities, and spending time with close and distant friends,” said Whitley. “There’s also a lack of time to do school work and overall tiredness that comes with it.”

Whigham said that not all athletes can handle competing in two varsity sports during the same season.

“Honestly, it’s definitely not for everyone,” said Whigham. “I’ve been playing both sports [track and lacrosse] since freshman year, so, for me, I’m used to having to work extra hard at a higher intensity.”

Playing two sports in the same season, especially in high school, has split the sports community into two schools of thought.

One issue is the lack of recovery time for the athletes. According to Dr. Joel Brenner, who is currently the team physician for Norfolk State University and schools in Chesapeake and Virginia Beach, VA, youth who specialize in sports were 81 percent more likely to sustain an overuse injury. Brenner conducted a study on the issue in 2007 for the Council on Sports Medicine and Fitness, which was published in “Pediatrics,” the journal of the American Academy of Pediatrics.

Additionally, when athletes split time between two sports, it is inevitable that the player will miss time for both sports. Players missing practices and games is never ideal, but Whitley says he makes it work.

“Of course, the coaches want me to play the sport that they coach and expect me to go to as many events as possible,” Whitley said. “I do miss some practices for both sports, but my coaches still understand that I try my best to go to both and perform well; so, they are lenient.”

“Playing two sports [in the same season] gives me an advantage over everyone else because I’m getting twice the amount of work, so I always have a leg up on the others,” Whigham said.

Boys Varsity Tennis coach Val Taylor said that she sees benefits in her players that are able to play multiple sports.

“With [Whitley], he’s quick, he’s agile, and he’s fast, and that comes with his practice with ultimate frisbee,” Taylor said. “There’s a crossover for sure.”

“A big reason I do it is to maximize my opportunity to get a scholarship,” Whigham said. “Me playing two sports shows my versatility and value in more than one area.”

For some single-sport athletes, playing another varsity sport in the same season seems to be too much to ask.

“Playing one sport is very time consuming and, sometimes, inconvenient already,” said Blythe Kidwell, a sophomore who played JV soccer last spring. “I can imagine that playing two sports in the same season would probably leave no time for homework or social events.”

Taylor also admits that playing multiple sports, especially in the same season, takes a special level of commitment, and it’s definitely not for the average athlete.

“You have to be highly disciplined and be able to keep up with your academics, and you have to be pretty skilled in both sports,” Taylor said. “You have to have all of the tools of the trade.”

In the end, for athletes who play two sports in the same season, the benefits can outweigh the negatives.

“I get to play both of the sports that I love and enjoy, and I know that I am supported by both my parents and coaches,” Whitley said.