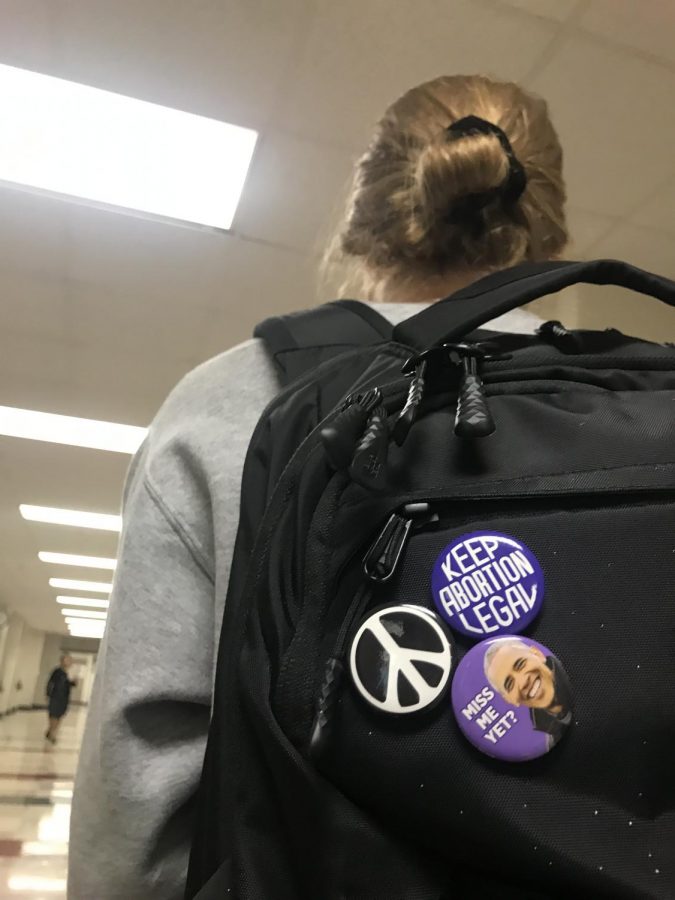 Senior Nadia McGlynn believes the government does not have the right to regulate a woman’s body.

“The decision to have a baby should be the mother’s, and the government shouldn’t dictate what a woman does with her body,” said McGlynn, a member of Planned Parenthood’s Teen Action Group and Grady’s IGNITE club. “I hope to see abortion remaining a free choice, with no restrictions like the ‘Heartbeat Bill’ that can greatly limit a woman.”

Anti-abortion bills from various state legislatures, including Georgia’s, have fueled a debate concerning women’s and fetal rights nationwide. A federal judge blocked Georgia’s “Heartbeat Bill,” which banned abortions occurring after the detection of a fetal heartbeat. The judge’s action temporarily halts the bill, which was originally scheduled to become law on Jan. 1 after its approval by Gov. Brian Kemp in May.

U.S. District Court Judge Steve Jones ruled that the bill contradicted the 1973 U.S. Supreme Court ruling in Roe v. Wade that protects a woman’s right to an abortion under the U.S. Constitution.

Wanda Taylor, the school nurse, was a peer educator for Planned Parenthood in Monterrey, Calif. She taught her high school classmates about different types of birth control, she said. However, since moving to Atlanta Public Schools, Taylor teaches abstinence only.

“As an APS nurse, we don’t promote any birth control methods,” Taylor said. “We promote abstinence, which really is the safest because birth control methods don’t protect you from herpes, genital warts, syphilis, gonorrhea or HIV [human immunodeficiency virus]. HIV viruses are so small they are finding that it can get through condoms, so abstinence really is the safest emotionally and physically.”

“I’ve spoken with a few pregnant teens, most do online or alternative schooling because they need more assistance and preparation for a baby on the way,” Haller said. “They all agree there should be access to contraceptives, so that teens do not have to take on the tremendous role of parenthood at such an early age.”

“If Grady offered basic contraceptives in the nurse’s office or the bathrooms, it gives students the opportunity to practice safe sex with ease,” McGlynn said. “Normalizing contraception will also make it something that seems like a given rather than a hassle.”

With many pro-abortion voices on campus, students who oppose legal abortions can sometimes feel unable to express their perspectives.

Sophomore Jayla Davis is neutral on the “Heartbeat Bill,” but used to strongly oppose abortion. Davis’ perspective was mainly shaped by a personal experience with a family member who had an abortion but may not be able to have children.

“At first, I didn’t believe in abortion at all because I think you should just bring a child into life, like maybe you could put them up for adoption or maybe you could set a plan for them to have an adoptive family,” Davis said.

Davis added that her earlier views were forged because she’s, “really from the Deep South, and it’s like, you have your baby …  and then I moved down here (Atlanta), and I got to be introduced to different things and different situations, and then I started thinking about people’s financial situations, so [in some cases] it wouldn’t be good to bring a baby in financially.”

Davis said she couldn’t have an abortion.

“I wouldn’t have an abortion at all because I don’t believe in terminating a baby because I still believe it will be a life, even though people don’t think it’s a life, I believe it’s a life.

Regardless of what side someone stands on abortion, the choice is still up to each individual and not lawmakers, Davis said.

“An abortion is something personal and sacred to a woman,” said Davis.

“When we received the preliminary injunction, which is a temporary block on the bill, we counted it as a victory for Georgia and for the whole country,” said Barbara Luttrell, spokewoman for Planned Parenthood Southeast, referring to Georgia House Bill 481, the so-called “Heartbeat Bill.” “We will continue to fight this ban every step of the way until we receive a permanent injunction. In the meantime, we want folks to remember that abortion is still safe, legal and available in Georgia.”

A senior who is sexually active and regularly uses contraception said that the movement against safe and legal abortions has affected her mentally.

“It makes me anxious to think about my future as a women with the political chaos going on now surrounding abortions,” said the student ,who wished to remain anonymous. “The fact that my right to end a pregnancy I’m not ready for financially, emotionally, or physically could be taken away at any given moment is terrifying.”

Students are also skeptical of the lawmakers behind the anti-abortion bills.

“Although, personally, I wouldn’t get an abortion because of religious reasons, it has always given me peace of mind that the option was available to me if it ever came to that,” said another anonymous senior. “I think because it is your body, it should be your choice what to do with it, and it is unlawful for any politician, especially a man, to dictate that or try to decide when you are ready to bring another life into this world.”

Sophomore Jack Kast said the court’s blocking of Georgia’s anti-abortion bill reinforced the power of voicing voting to have a voice.

“I am definitely opposed to government actions to limit access to abortions, and I think that the most recent action of this law only being prevented by the courts shows the importance of voting and activism,” Kast said.