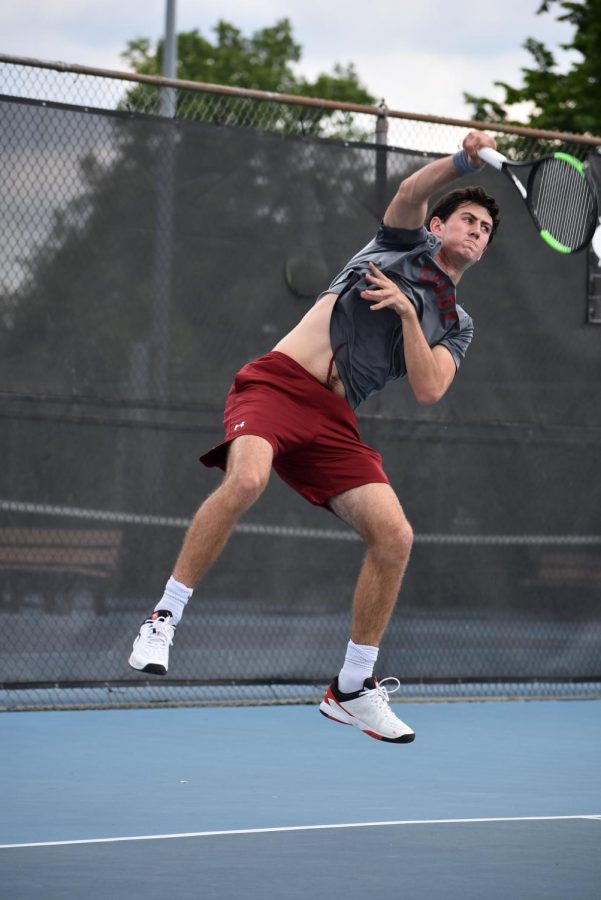 “Getting the offer from Lafayette early in my senior year was super nice and took off a huge weight on my shoulders,” said Josh Wolfe, a freshman tennis player at Lafayette College. “I could really enjoy my senior year even more, but it also made me more motivated to work harder on and off the court since I wanted to have as much of an impact on the team as possible.”

The transition from the high school level to college has been challenging for some as training is more frequent and intense.

“The transition has been drastic; it is nothing like high school practice whatsoever,” said Malachi Smith, a freshman lacrosse player at Cleveland State University. “The level of training honestly went from zero to ten. I’m up at 5:30 almost every day and get done at 9:30 a.m.”

While a shift in training may have at first surprised many of the athletes, they have become more accustomed to the new routine.

“In terms of scheduling and time management, it’s been totally fine,” Wolfe said. “I’ve been adjusting really well. I really like having that structure of knowing when to go to practice and how to manage my time.”

With the scheduling of classes and practice comes a balance that many of the athletes have become more than familiar with throughout their high school careers. But for some college athletes, that balance has become more difficult.

“With the balance between athletics and academics, it has been challenging,” said Mia Wood, a freshman soccer player at Radford University.  “Some weeks are harder than others because of tests or projects, but our coaches stress that school comes first. That being said, they also expect us to keep track of it ourselves. We don’t  get any passes because we’re athletes, so we really have to manage our time well. I try to take advantage of Sundays and any other off days to do homework and run errands.”

Wood started her competitive season this fall and was awarded the Big South Conference’s “Sports Rookie of the Week” as a defender for the week of Sept. 23, 2019. The team is currently 11-4.

In addition to a change in competition and training, competing in college athletics has helped the athletes change their mentalities toward their sports.

“My approach is completely different; I have to work a hundred times harder,” Smith said. “I’ve developed a dog mentality. I just want to be the best I can, so I can deliver for my squad.”

Even though the new level of competition has brought a competitive spirit,  it has also caused stress.

“I think I’m putting a little too much pressure on myself trying to perform and really make a statement with the team, to show I can compete well at this level,” Wolfe said. “I think I’m focused too much on results, in winning and not playing my game. I think it’s hindered me, but at the same time, I think I’m still competing really well and learning how to compete … better at this level.”

For most of these athletes, the transition into collegiate athletics has been made easier by the camaraderie on their teams.

“When I went on my visit, it was important to me to see if I could mesh well with the team,” Wolfe said. “Even if the school and academics come first, I would still be spending four years with these guys; so, I want to make sure I was enjoying myself.“

As the Class of 2019’s Division 1 athletes gear up for their seasons, they look back on their high school careers and offer a few words of advice to current hopeful athletes.

“My advice to Grady athletes who want to continue to play their sport in college would be to not put too much pressure on themselves,” said Wolfe. “It is a lot easier said than done to avoid thinking about results and college coaches on your radar, but if they can enjoy the grind and the process of getting better, the results will end up taking care of themselves.”