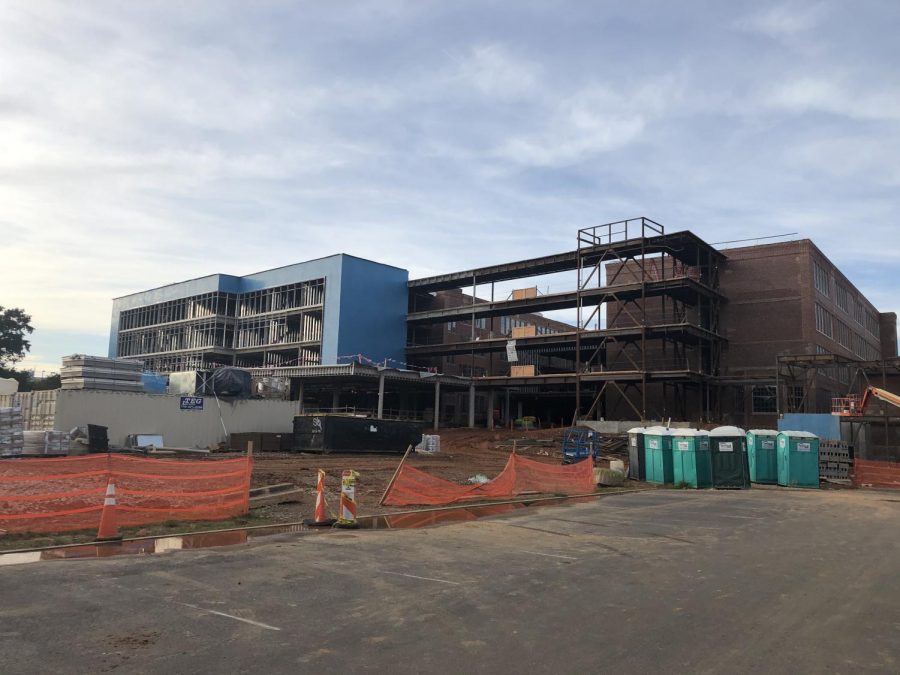 The photo displays the David T. Howard building under construction as of October 2019. The new addition to the structure is shown on the left hand side of the photo. It is a blue material lined with a metal frame. The remains of the original school can be seen on the right of the photo. The freshly laid concrete is also visible in the foreground.

For the past two years, the residents of Old Fourth Ward have witnessed major changes in the once-abandoned David T. Howard school building, which served as the childhood elementary school of civil rights leader Martin Luther King Jr.

The building, which closed in the mid-1970s, is now being transformed into a modern facility fit to hold approximately 1,300 middle schoolers that will be reassigned from Inman Middle School, which is Grady’s current feeder school. The loud commotion of the construction site is a constant reminder of the change the area is undergoing.

Residents of the neighborhood and the surrounding businesses are preparing for the new school’s impact on the area. The stores and shops of Inman Park and Old Fourth Ward are expecting an increase in foot and car traffic when the school opens next August.

“On the weekdays, it is pretty calm around here, but when the school comes around, I’m sure it will be less peaceful. I know it will be great for Krog Market and our sales,” said Oliva Walsh, a college student working at Sweet Inman Candies, a candy store in Krog Street Market.

Schools usually help generate more attention to the shops and businesses around them. Every day students, parents and teachers look for nearby establishments to get food or to hangout.

“Near Grady, I know a lot of kids go to places outside of Grady after school. At Maynard, we go to the Chick-Fil-A and Kroger. So, I think Playa Bowls will act in the same way. Students will spend their time and money here,” said Playa Bowl employee Isabella Rouse, a junior at Maynard Jackson High School. “Our food and smoothies attract that age group, so we honestly can’t wait.”

Although the school will likely benefit the area, a potential problem is increased car traffic.

“The traffic, in general, will be bad. It already is,” said Grady student Christian Bryant, an employee at Jake’s Ice Cream, a popular hangout just down the street from Howard. “The commute is going to be horrendous.”

“There is already so much traffic, especially near the BeltLine,” said Cole Cannon, a nearby homeowner. “As much as I think it’s a great idea to have a new school built, it is going to be annoying trying to drive and walk places.”

Although crowding and traffic are anticipated negative impacts of Howard, many residents welcome the idea of integrating education into the community.

“I think no amount of additions or supplements to education or infrastructure could cause harm,” said Brian Cook, a resident and employee at Bell Street Burritos. “It will contribute to a positive environment, and it will only benefit the community.”

Inman Park and Old Fourth Ward are historic areas of Atlanta. The streets are lined with 19th Century Victorian homes, as well as other aged structures. Some locals appreciate the choice of the location for the school, and are pleased that the historic building associated with Martin Luther King Jr. will be preserved. In addition to serving as King’s elementary school, the building last operated as Howard High School.

“I think it will bring more diversity to the neighborhood,” said Tom Baldwin, an Inman Park homeowner. “It is a cool location for a middle school, especially a public one. A brand new school like that will shift the culture of the area for sure. Kids will get to experience a truly historic part of Atlanta like never before.”

Atlanta is constantly changing, and Old Fourth Ward is no different.

“I think everyone in this area will see over time the positive influences as you would from any increase in education or infrastructure,” said Cook. “That creates a more educated and more positive outlook on a community, so that can only come back to help everybody.”