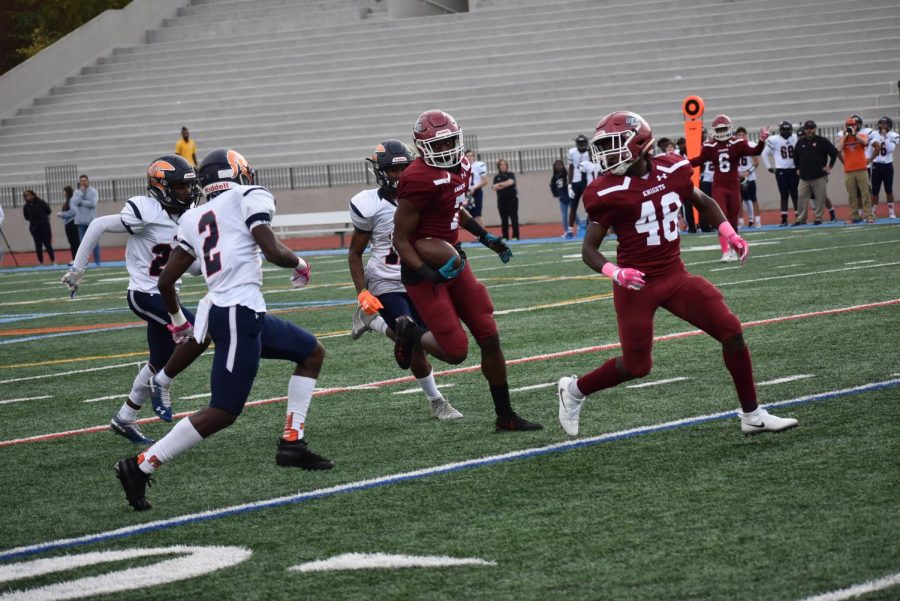 Senior tight end Dewan Wright runs from defenders in the second quarter of the homecoming game against North Springs on Oct. 18. The Knights won 40-0.

A dominant performance on all sides of the ball led Grady to a 40-0 homecoming game victory on Oct. 18 against 1-6 North Springs. Grady is now 3-4 on the season and 2-2 in Region 6-AAAAA.

“This is the way we should get a win; we were able to put all phases together on special teams, defense and offense,” head coach Kevin Clark said.

North Springs started its first drive from its own 25 yard line, and after a would be interception by senior cornerback Alvin James was dropped, the Spartans converted on back-to-back fourth downs.

The Spartans were driving the field, and James redeemed himself, intercepting North Springs’ quarterback Jason Murphy and returning the ball to the 48 yard line.

North Springs turned the ball over on downs on its next drive, giving the Knights good field position once again. Stillwell completed a 28-yard strike to senior tight end Dewan Wright to put the Knights in the redzone.

Stillwell then did it himself, running the ball in from 15 yards out on a read option keeper. The Knights led 14-0 with 9:28 left in the 2nd quarter.

Grady showed its defensive prowess once again as Stillwell intercepted Murphy and returned a pick six 75 yards. After a bad snap on the point after, the Knights led 20-0 at the half.

The Knights continued to rack up points in the second half. Wiggins returned the second half kickoff 77 yards for a touchdown, pushing the advantage to 27-0.

Wiggins wasn’t done scoring. A screen pass turned into a 38-yard touchdown after Wiggins juked his way through the Spartans defense for his third score of the night. Grady led 34-0.

The Spartans switched quarterbacks at halftime, but it didn’t seem to make a difference. The Knights forced three turnovers on downs in the second half, and Stillwell put the cherry on top with his second pick six on the last play of the game, making the final score 40-0.

“It was a good win; we did everything we needed to do defensively; we shut them out and put a lot of points on the board,” Clark said. “I wish we didn’t have as many missed tackles, but that’s the coach in me. Everything can’t be perfect.”

The Knights hope the dominant win will give them momentum as they face off against two difficult division rivals, Maynard Jackson and Riverwood, in their next two games.

“It’s a confidence builder; we’re gaining confidence getting a win like this and beating a team like this,” Clark said.