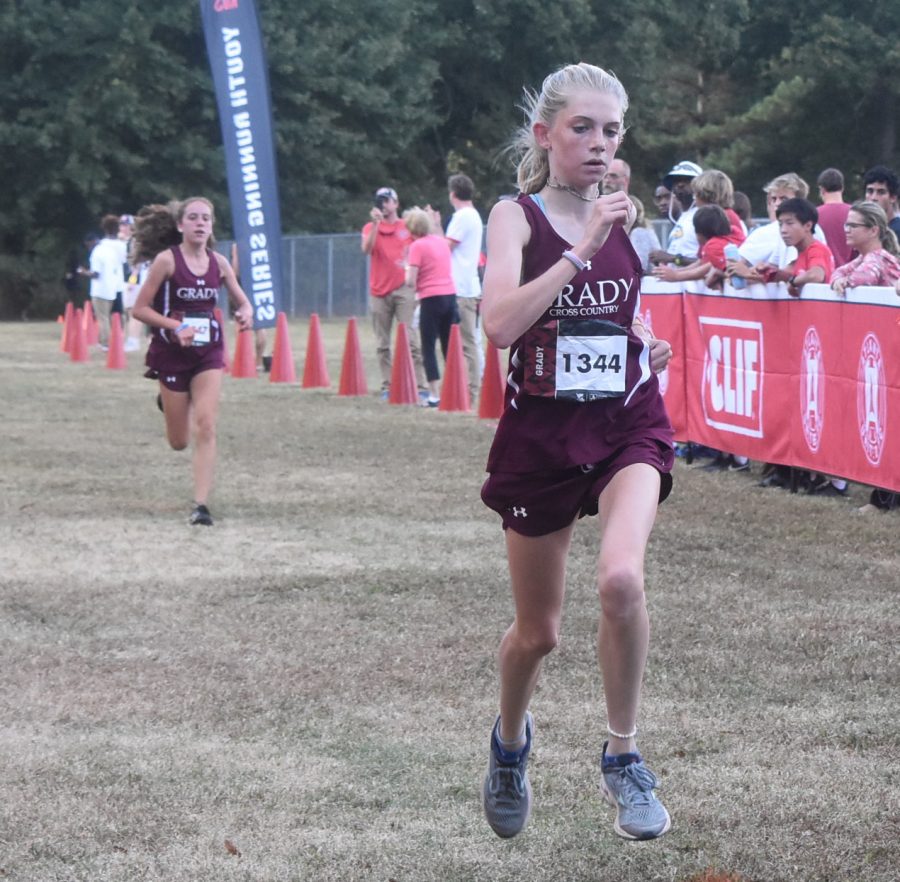 FOR THE WIN: Sophomore Ellie Spears strides down the chute finishing first in the APS City Championship meet on Oct. 8. The Knights’ finished first overall, sweeping the meet with the first five finishers.

Coming off of a fifth-place finish at the Class 5A state meet last year, the girls cross country team has big expectations for the 2019 season.

“I don’t ever compare one season to the other,” coach Jeff Cramer said. “You just take the people that you have in front of you every single day, and you try to maximize their performance. You don’t have to have superstars; you just have to have a group of seven to 12 kids who really want to work, who want to support each other, who really want to cheer each other on in practice and in meets and make the most of it.”

The young team relies on underclassmen to make up the varsity roster.

The heavy reliance on underclassmen does not change the team’s state meet goals.

“In my opinion, age doesn’t matter,” freshman Jamie Marlow said. “All that matters are times and, theoretically, if a freshman can get the same time as a senior, I don’t see why age would put Grady at a disadvantage at meets.”

In addition to advancing to state, the team’s goals include personal improvement and development.

“The first goal for every season is to qualify for state,” Cramer said. “The next goal is to, once you get to state, put yourself in a position to do the very best you can. I don’t set out with a goal of winning state. I set out with a goal of trying to get the best performance we can out of each individual person, and collectively as a team at state, so we can finish as high as possible. If you come out every year and say we are going to get the most we can out of our team, then you win every year.”

To increase weekly mileage and avoid high temperatures in the afternoons, the team participates in morning practices on Tuesdays and Fridays. “The main reason [for morning practice] this year has been the heat and what I have been really pleased with is that it has become something more than just avoiding the heat. What it has become is a team-building experience because we have gotten such a large group of both boys and girls coming to the morning practice that I think it has really contributed to the cohesiveness of the team.”

“Morning practices are the best practices, in my opinion,” senior Marisa Lopata said. “Getting up early and just getting that blood pumping is a great way to start your day. We’ll go on the track and sometimes do speed intervals or longer runs in the neighborhood, but they are so helpful. You get used to getting up early for one, and [get into] that mindset that this last 800 [meters] is going to make a difference next race.”

“I love having two coaches because it is one more person cheering you on and pushing you to do your best,” sophomore Ellie Spears said. “Both Ms. Washam and Mrs. Carter are great coaches, and I am very happy to have them both.”

The most important aspect of Cramer’s training, like every year, is group running. According to Cramer, allowing runners to train by themselves makes them think “that they are an individual rather than part of a group.” Cross country is a team sport. The top five runners  contribute to a team’s total points.

“I think that pack running is a very smart way to train,” Marlow said. “It builds the team’s relationships with one another and motivates us. It’s also a great equalizer, no matter what your running level is.”

Teamwork and group running is important on meet day.

“Now, occasionally, you will get to state, and you will have one or two, maybe even three people who just have a bad day, and that happens all the time, but if the rest of your team pulls through, then again that really emphasizes the team nature of the sport because the team can then still score well collectively in the team competition,” Cramer said.