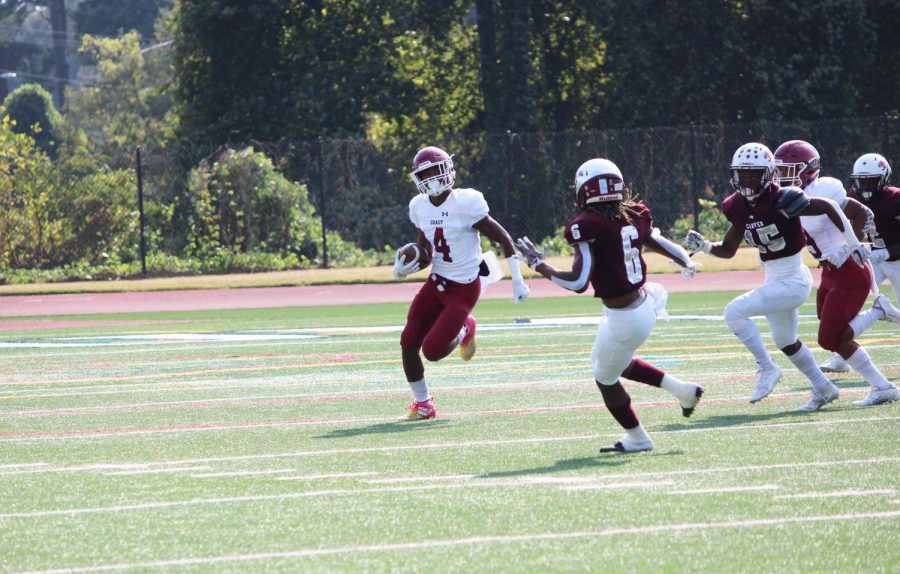 Junior receiver Nathaniel Wiggins runs with the ball on a kick return in the first quarter of the game against Carver on Oct. 5. Wiggins scored two touchdowns despite the team losing 39-21.

A run heavy Carver team handed Grady their 3rd loss of the season with a score of 37-21, fueled by a 4 touchdown performance from Mississippi State running-back commit Jo’quavious Marks.

The division front runners out-sized and out-manned the Knights, but Grady did not back down, keeping it close until the fourth quarter, when the Carver Panthers scored 17 unanswered points.

The game started off poorly for the Knights with a fumble on the kickoff return by wide receiver Nathaniel Wiggins, putting the Panthers in a prime position to score.

The Panthers got the ball back after a failed 4th & 1 try, once again leaving them with prime field position. A 13-yard touchdown run gave Marks his second touchdown of the game at 6:39.

“That guy [Marks] is an SEC back, Mississippi State is where he’s going to end up going. When you have a Power 5 back you can’t expect to bring him down with arm tackles.” coach Kevin Clark said.

The Knights responded well, with a 62 yard touchdown catch at 6:18 by Wiggins that made up for his fumble on the first play of the game. The extra point was blocked putting the score at 14-6.

Panthers quarterback Amari Jones suffered an injury in the second quarter that ended his game, so the offense began to sputter. The Grady offense also sputtered as they struggled with turnovers, and neither team was able to score for the entirety of the second quarter.

Carver started the second half off with a 58 yard touchdown run by Marks, and frustration grew throughout the Grady defense.

Grady got the ball back and produced a substantial drive, but it was ended by an interception from quarterback Aquinas Stillwell on the 6 yard line, his second interception of the game.

On the first play after Stillwell’s interception Panthers backup quarterback Zyee’k Mender fumbled the snap on his own one yard line and the Knights were able to recover.

Senior running back Canaan Brant pounded the ball in on first and goal with 2:39 left in the third quarter, leaving Carver with only a one score lead at 20-13.

The fourth quarter began, and on the first drive of the quarter, Stillwell was sacked in the back of the end-zone resulting in a safety, putting the score at 22-13.

The Panthers received the ball as a result of the safety and they capitalized off of a 38 yard touchdown run by Marks at 11:15, his 4th and last touchdown of the game. This touchdown put the game for the most part out of reach with a score of 29-13.

Carver scored once more with a 2 yard touchdown run at 6:36 by backup running back Jarveous Brown.

In total, the Knights finished with 2 fumbles, 2 interceptions, a safety, and two failed fourth down plays.

“We had too many turnovers. I think we had a good gameplan, but we can’t turn the ball over that many times and expect to get a win” Clark said.

The players may not have been proud of the outcome, but they were proud of their persistence.

“I think we played hard and left a lot on the field.” tight end Dewan Wright said, “We have to work hard in practice and we have to learn from this game.”

The teams looks ahead to the homecoming game against North Springs, in which they look to begin their playoff push.

“We just have to keep working hard, and we have to be 1-0 every week in order for us to make the playoffs.” Clark said.