Spikeball catches on with college and high school students 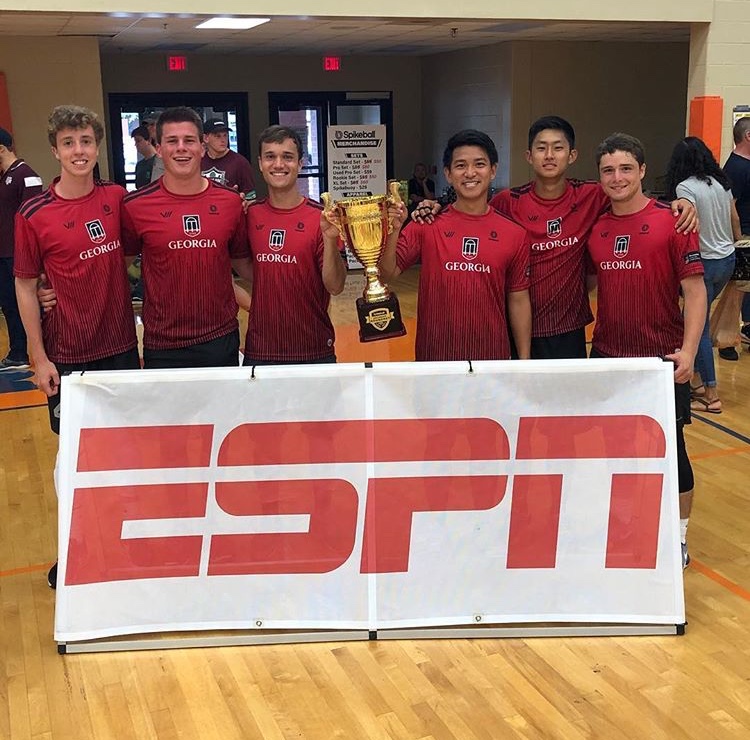 When a student wants to play a sport, they usually go to play the classics, immediately flocking to play the traditional sports of football, basketball or baseball. However, this isn’t the case for some who have started branching out to find new sports with new rules and new ideas. One of those new sports brings with it an entire community of players and individuals: spike ball.

Spikeball is a mix between volleyball and four-square that is played between two teams with two players each. The competition is played with a hula-hoop sized Spikeball net in between the two teams. Players start the game by serving a ball down into the net where it ricochets back up into the opponents. The opponents then have three touches to control the ball and bounce it back off the net to the other team. If they fail to serve it back, the opposing team gets a point, and the first to 13 points wins.

“Spikeball is a really fun and competitive activity,” sophomore Scott Whitley said. “It’s overall just a really great event that me and my friends can play whenever and wherever.”

Spikeball, which started as a small Shark Tank pitch in 2015, has grown into a sport with a whole community surrounding it.

“Spikeball 100 percent has a community around it,” University of Georgia student and Grady alumnus Tyler Randall said. “When I joined the club at Georgia so did like 15-20 other guys, and we instantly became buddies. Now, every year, more and more people join and get integrated into the system.”

Randall is part of one of the biggest communities for Spikeball: college students. Due to Spikeball’s rustic style, it places well in college next to cornhole and other lawn sports.

“The best part of Spikeball is the teamwork that goes into it,” freshman Jordan Taylor said. “Every point scored takes both players on the team, and it feels so rewarding. That is what I think brings people back.”

Spikeball is teamwork oriented. The challenge of Spikeball is each teammate having the same mindset to put the ball back into the net and win points.  Spikeball however, is not all recreational.

“Spikeball, while being a very easy sport to learn, is nearly impossible to master,” Randall said. “We [the UGA team] played in the national championship this last year, and the game changed.”

Competitive Spikeball becomes a more technical sport and focuses on the serve. Spikeball claims to have more than one million players in the U.S. and 1,500 ranked teams in various leagues. These teams compete in various tournaments for cash prizes and to be crowned the best Spikeballers around.

“I think Grady should have Spikeball club,” Whitley said. “I know that many people at the school have considered starting one, and I think I would join if there was one.”

Whitley claims the club would put students in a community and get them moving after school. Some high schools have already started clubs successively. Fuquay Varina, a high school in North Carolina, currently has 75 members and is one of the largest Spikeball clubs in the U.S.

“If a Spikeball club existed at Grady, I think I would join,” Taylor said. “It wouldn’t be that much of a commitment. It could be like a once a week thing or something.”

Spikeball keeps players coming back for the thrill of competing, Randall said.

“The best part of Spikeball is that moment of just pure awesomeness,” Randall said. “What keeps me playing is that one play, or that one epic dive that just makes the game, and it definitely keeps me coming back.”