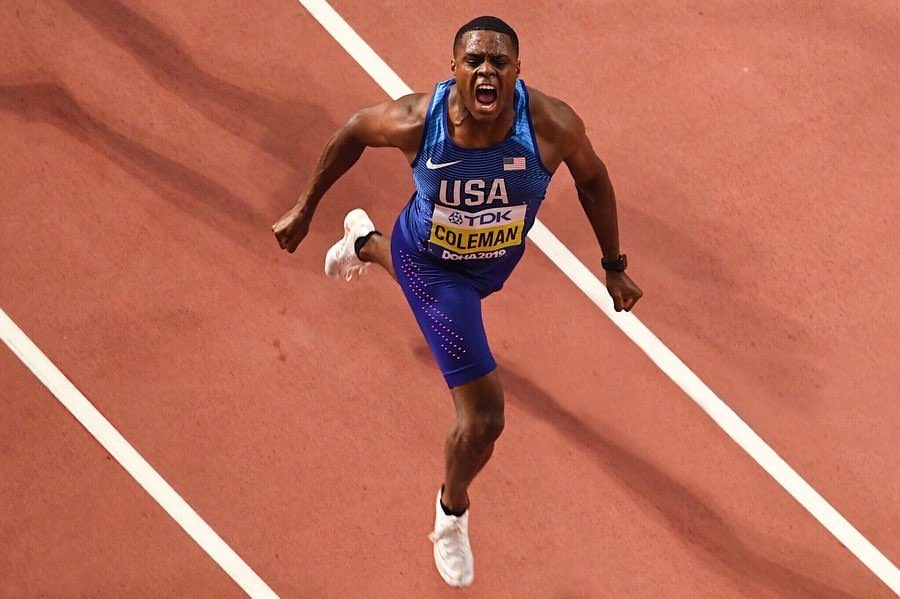 Christian Coleman celebrates as he finishes his 100m race at the IAAF World Championships in Doha, Qatar on Sept. 28, where he won. His world leading time of 9.76 seconds in the 100m makes him the third fastest American man of all time.

Christian Coleman has taken the world of running by storm, winning the gold medal in the 100 meters at the IAAF World Championships in Doha, Qatar today, Sept. 28. He ran 9.76 seconds for a world lead, making him the fastest man in the world since 2017 at just 23 years old.

After winning the American national championships and holding the world’s fastest time in the 100 in 2019, Christian’s victory in Doha did not come as a surprise to many, as he was a favorite in the competition. With the stakes high, Christian’s father, Atlanta Public Schools media relations manager Seth Coleman, was confident in his son.

“His coach talks a lot about how super, super competitive he is, but sometimes that can hurt you because it makes you overly aggressive,” Coleman said of his son. “Even for the 100 meters and the 200 meters, you’ve got a race plan that you put together … With him, I feel like if he goes out, and he executes his race plans, and he hits all of his phases like he’s supposed to, then he’ll be successful.”

Christian executed his plan, jumping to the lead from the blocks and never leaving the race in doubt, finishing in front of 37-year-old American teammate Justin Gatlin and Andre DeGrasse of Canada, the silver and bronze medalists.

“I see him over there [in the living room], and he doesn’t think anybody is watching him [trying to pick at the electrical outlet] because he is 11 months old, and so … I got the vacuum cleaner and snuck up behind him,” Coleman said. “I turn it on, and he was on his knees, popped up, got on his feet, and like sprinted across the room and dove on the couch, and then that is when he started crying. His first instinct was to move, and he shot across the room, probably about 15 feet or so, but seeing him just hop up on his feet and sprint across the room, I thought to myself … That is god-given; that is not natural … he’s got god-given, fast-twitch muscles.’”

The road to success was not always smooth for the current fastest man in the world as his slow growth proved a hurdle at a young age. However, his senior year in high school, Christian was all-state in football and a USA Today All-American in track and field.

“He hit a growth spurt late. When he was in high school, freshman year, he was 5’2, and by the time he graduated, he was 5’8,” Coleman said. “He just grew kind of late, but that role played into his development as a sprinter.”

Those who doubted Christian are a driving force in his career, Coleman said.

“Even though he has had the fastest 100 meter in the world for the past three years, there are still people who will say, ‘well, he has probably topped out, he is not going to get any faster because he is too short,’” Coleman said. “That thing still drives him to try to be better and to try to be the best, something he has been living with pretty much his whole life.”

The first “big time school” to reach out to Christian, according to Coleman, was the University of Tennessee. Despite being number one in the country in the 100 meters, the 200 meters and the long jump at the time, many college football coaches told Christian he couldn’t compete collegiately because of his height. With no large school Division 1 offers for football, Christian took up track full-time, becoming a Volunteer.

“It was just that loyalty, I think, that he had for them because they were the first big time school to pay attention to him and told him, ‘no, we think you’re plenty good enough, dude,’” Coleman said. “So, I think that had a lot to do with [why he chose Tennessee].”

Proving his doubters wrong, Christian became a professional athlete and Olympian while at the University of Tennessee, all while receiving his degree just a semester late.

“He left early when Nike offered him a nice contract, but we always told him that since you’re already gonna be in Tennessee anyway, still training with your coach, go to class, and go to school,” Coleman said. “And Tennessee was great about keeping him on scholarship, and so he graduated.”

Christian’s success has come as a result of many people’s support. While he may be the fastest man in the world today, he leaves a large gap to fill for the next generation. Coleman left a word of advice to parents out there with kids holding special talents.

“I tell parents all the time, if your kid has got a gift that you can see early on, and it doesn’t have to be in athletics; if your kid is a gifted musician, or a gifted writer, or artist or a gifted performing artist, and you see that early, you would really be doing your kid a disservice if you didn’t do everything you could to nurture that gift,” Coleman said.