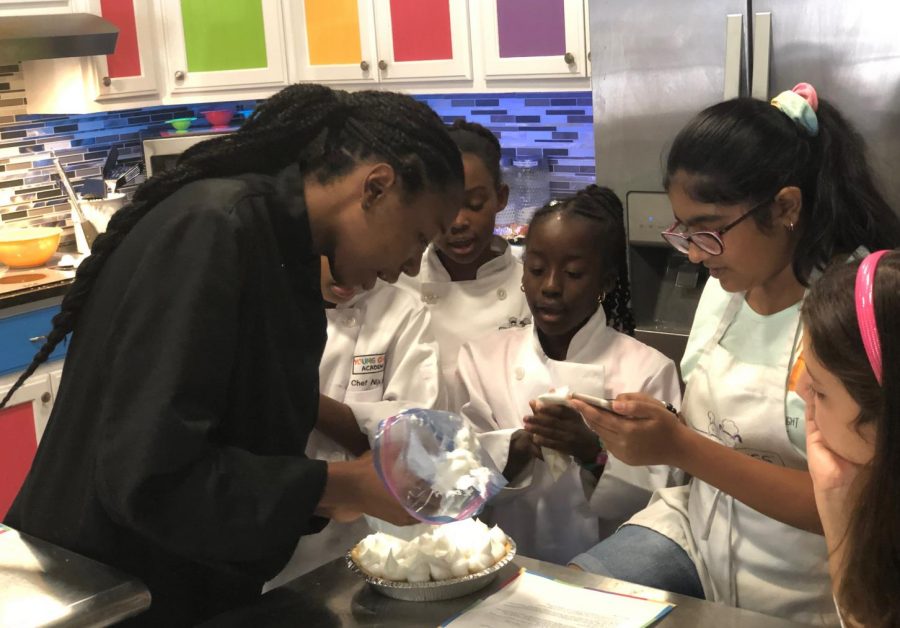 Junior Amelia Green teaches kids how to cook while she works at the Young Chef's Academy. Green loves to cook in her free time.

It all began with a disastrous grilled cheese sandwich with different kinds of cheese thrown together and the bread that was burned on the top and bottom. It tasted disgusting, but it was enough to get junior Amelia Green hooked on cooking.

Amelia has been surrounded by cooking her entire life, so it was only a matter of time before she found her home in the kitchen. She has vivid memories of her grandma filling the family kitchen with warmth and good food, especially famous family recipes. Amelia initially turned to cook as a way to join that family tradition.

“I always tell the story of my grandma,” Amelia said. “She cooks for us and she’s a typical Southern woman who wakes up at five o’clock and prepares all the meals for her children. Waking up to bacon and eggs and all of that kind of became ceremonial and it kind of became connected to family. I just wanted to replicate that feeling over and over and over and I just started cooking.”

And she kept cooking and cooking. Every night, Amelia prepares a meal from scratch, taking the time to practice the nuances of her craft. According to her mom, Shawn Green, it is always delicious.

“She’s very focused with her cooking; she knows what flavors go together,” Shawn said. “She creates meals all the time. She also knows different sauces and different ways to cook things. She always cooks artfully. She takes her time, and she likes it fresh.”

Amelia found a new way to explore her love of cooking when she started working at the Young Chef’s Academy. For the past three years, she’s taught young kids how to cook simple dishes and manage things like nutrition and groceries. Working at the Academy gave Amelia confidence and a career trajectory.

“When I went there, [Chef Lynlee Bradley] was like ‘Oh My God! This girl is so good,’” Amelia said. “And it just made me feel so happy that I was validated. I had inklings that I liked cooking but she validated me and I was like ‘Woah, I might be good at this.’ I just finally found my thing. This is my passion.”

Instead of wanting to follow the typical path of becoming a chef and starting a restaurant, Amelia wants to become the first African American woman to open a culinary school. She believes teaching people how to cook will have a much larger impact than simply opening a restaurant.

“I feel like teaching is so important,” Amelia said. “One day you can walk into a restaurant and have a great meal and you remember it maybe 10 days later. But going into a culinary school, learning these recipes; that’s staying with you for a lifetime. That’s the generational impact. It’s making a forever stamp. I want to be a part of that forever stamp. “

To make her mark, Amelia plans to study the food scene around her so that she can add to it. Being raised around Southern food has already impacted her cooking style.

“There’s such historical importance and impact of soul food, and I don’t want to be standard, but soul food is so important to black people and you see it in Atlanta’s food scene,” Amelia said. “Just knowing the basics and knowing what that food has been through is kind of cool.”

Amelia has received support and encouragement from all walks of life when it comes to pursuing her future in the culinary field. Her mom, though initially intimidated by Amelia’s talent, has been very nurturing both in and out of the kitchen. Amelia’s friends are also very encouraging of her cooking.

“I think it’s really cool how Amelia is always cooking,” junior Inaya Abdul-Haqq said. “I constantly ask her to bring in the food she cooks because I’ve heard it’s so delicious.”

Part of what Amelia loves about cooking is how it is universal and directly tied to sharing. While her passion is teaching others the process of preparing a meal, Amelia also likes to watch others enjoy her creation.

“Food is love. For me, it is the biggest expression of love that I could give you,” Amelia said, “Sharing a plate of food is love and there’s no better way to describe it.”