Shoes are overlooked in sports 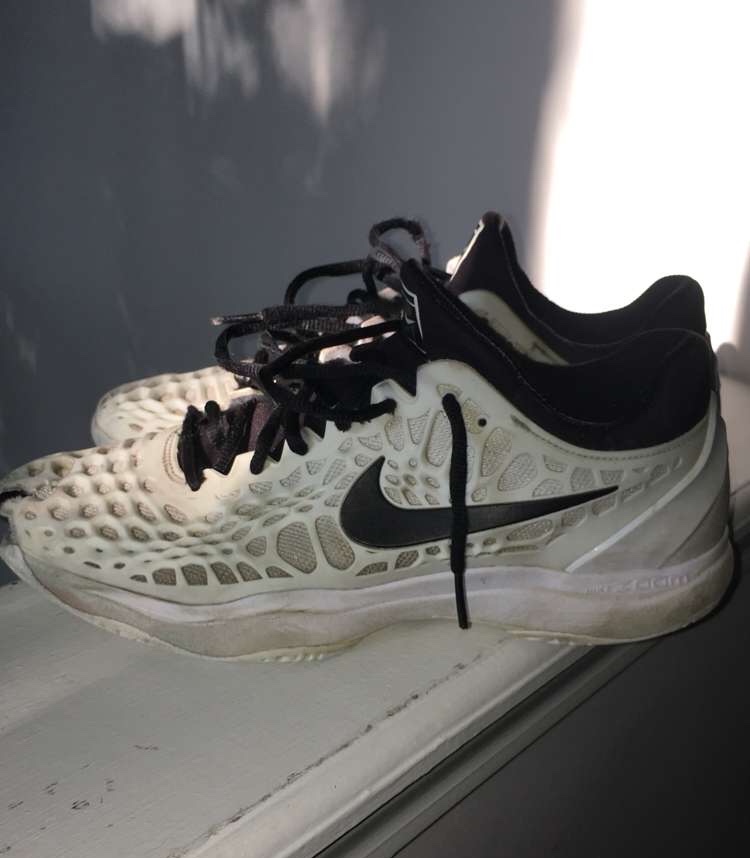 Sophomore tennis player Teddy Suazo uses the Nike Air Zoom tennis shoes because they are lightweight, comfortable, and have a sturdy toe box.

Footwear is an overlooked component that can increase an athlete’s chances of success and experiences in sports.

“In tennis, it is very important to have shoes that are lightweight, comfortable, and have a sturdy toe box,” sophomore tennis player Teddy Suazo said. “This is because when you are running on the court, you make quick and small cuts that require a sturdy and protective toe cover, in case you drag or slide your feet to the ball.”

Tennis is played on a relatively small court, which requires athletes to make short, quick cuts while also stopping abruptly. Athletes need shoes that support their movement on the court.

“Tennis is a sport that can be hard on your feet, and I have come out of practices with foot pains and aches because of the stop-and-go movements that you make while playing,” Suazo said.

For cross country, the role of shoes is critical. Cross country is a natural-terrain version of long-distance track that requires athletes to run outdoor races on dirt or grass. As a result, runners have to build strong legs and endurance, and at the same time, wear shoes that allow them to perform well. In many circumstances, runners purchase two pairs of shoes to increase their chances of success.

Ultimate frisbee, which is popular at Grady, continues to grow, and players have advanced to the national competition level. For example, in 2018, the Grady Gauntlet ultimate frisbee team competed in nationals and won. In an ultimate frisbee game, seven players from each team compete on a field to score a point in the other team’s endzone. There is no running with the disc. Instead, an athlete must throw the disc to teammates who get open by making cuts. Players choose between either light cleats that allow them to move quicker or comfortable cleats that are often thicker. Thicker cleats allow players to play longer without aches and pains in their feet.

“I play the role of a handler, on the field, who is around the disc more than others, and facilitates the offense,” junior ultimate player Benton Shevlin said. “I use Nike soccer cleats because they are lighter than football cleats, and they hug my feet more tightly.”

Lacrosse is a sport that’s played on a football field in which players try to throw a ball in a net with pocketed sticks. Though the sport has many pieces of required equipment, including head and body gear, a lacrosse stick, and a mouth guard, athletes can wear any type of shoes. However, when a player wears a good pair of cleats, they can be more successful, players said.

“It is more beneficial to wear cleats instead of shoes in lacrosse because, with cleats, you receive a better grip on the field, and you do not slip as you would in everyday shoes,” sophomore lacrosse player Avi Friedman said. “Lacrosse is very hard on your feet, which makes it important to have cleats that are comfortable because you cannot do a lot of running if your feet hurt the entire time.”

Lastly, soccer is a sport known for players’ ability to use good footwork, athleticism and technique. Nevertheless, to enhance these aspects, a player must have good cleats. For example, having cleats that are light and have qualities that can allow a player to kick the ball in different ways improves a player’s footwork and technique. Additionally, with long games on massive fields and a constantly-moving ball, as a result, it is vital for players to have comfortable cleats that support their athleticism.

“Soccer is definitely a sport that is hard on the feet because a player is running for 90 minutes with only one break,” sophomore soccer player Christopher Walker said. “The average professional soccer player runs an average of at least six to eight kilometers a game.”