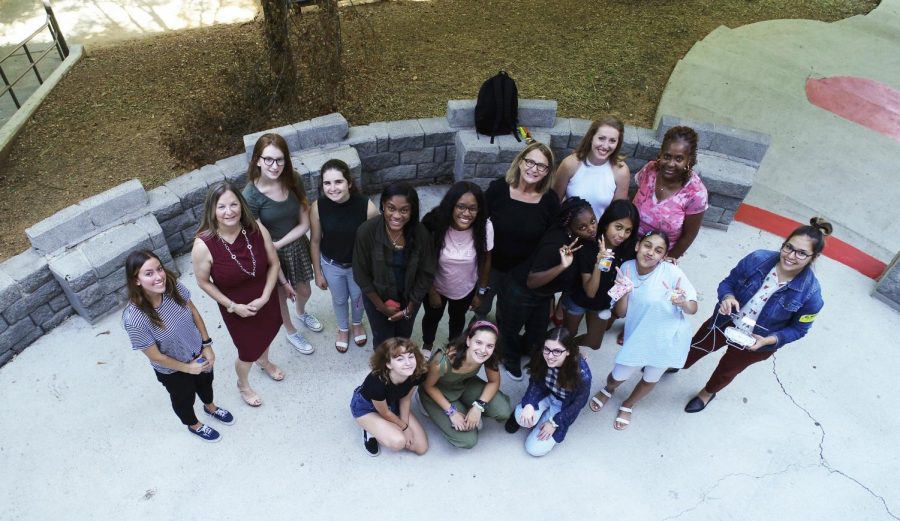 The Women in Transportation club takes a photo by drone at a meeting with female drone pilots.

For junior Kiala Blackman, one of the most striking things about the first day of school was walking into her computer science class and seeing how few girls there were.

“I noticed a large number of boys compared to girls, and it was awkward,” Blackman said.

“It just makes the females feel like they can’t do coding because there are so many boys in the class,” Blackman said.

Blackman’s experience is not unusual. Computer science usually has the lowest ratio of girls to boys when compared to other AP classes in science, technology, engineering and math. According to the College Board, boys made up more than 75 percent of students in AP Computer Science A throughout the country.

“Though boys are dominant in both classes, it’s much better than last year,” Fuller said.

An imbalance of women in STEM subjects is a common theme on high school and college campuses nationwide. In the United States, women have earned 57 percent of all bachelor degrees since 1990, but have only earned 18 percent of computer science degrees and 20 percent of engineering degrees. According to the National Science Board, women make up 50 percent of the college-educated workforce, but only 28 percent of the science and engineering workforce.

When women do become scientists and engineers, they are typically concentrated in different occupations than men. According to the National Science Foundation, relatively high amounts of women were in the social sciences, with 60 percent, and relatively low numbers in engineering with 15 percent and computer and mathematical sciences with 26 percent.

To combat the lack of women entering the transportation fields, math teacher Vicki Vinson sponsors Grady’s Women in Transportation Club. The club hosts female speakers and presenters and visits major transportation areas around Atlanta to provide members with an understanding of jobs in the field.

“In the fall, we had a panel of [women in transit],” Vinson said. “We had the head of Cobb County Transit, the head of MARTA, and the head of Gwinnett County Transit, all women, and they came, and they spoke to our girls. We had a question and answer session, and it was really incredible to hear what they had to overcome as females in what is a predominantly male work area.”

Vinson and leaders of the international Women in Transportation organization want to attract more women to STEM fields.

“The goal is to encourage girls to go into those fields that are normally more male-dominated because women are under-represented in the transportation engineering field,” Vinson said.

Grady has a partnership with the National Math and Science Institute (NMSI) and Georgia Tech with grants to increase the population of girls, African Americans and Latinos in the Computer Science classroom.

Vinson tries to increase diversity in her AP Statistics classes by recruiting students to enroll.

“I try to encourage students that I feel can handle the load who may not have been prone to taking AP Stats — to make them feel like they can do the work, whether they’re female or male, black or white,” Vinson said.