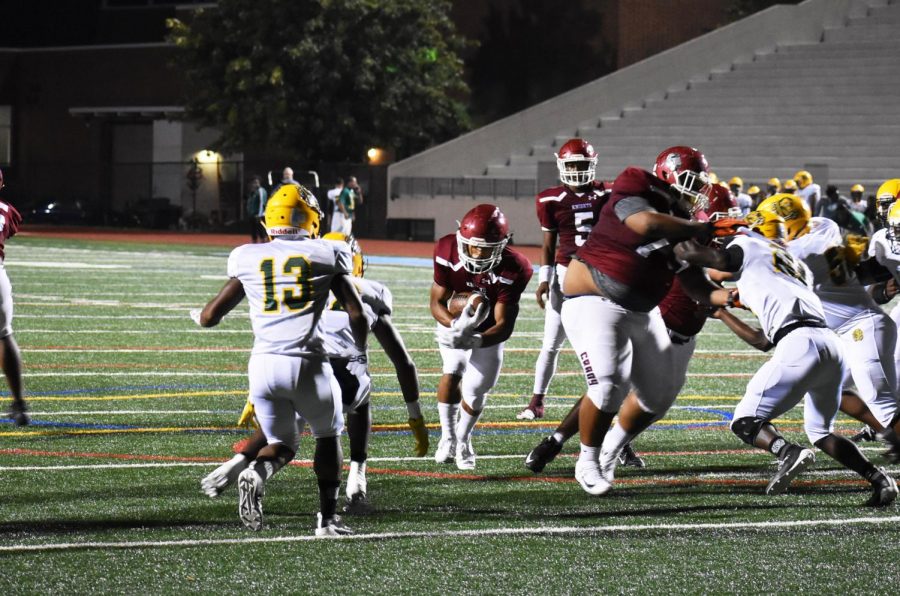 Senior Canaan Brant finds the gap in the offensive line to score a touchdown in the second quarter of the game against Lithia Springs on Sept. 20. The Knights won the game in overtime 45-42.

The Knights defeated  Lithia Springs in overtime  45-42 in a game that looked to be a blowout in the first half on Sept. 20.

Grady lit up the scoreboard in the first half, but the team sputtered on both sides of the ball in the third quarter, allowing the Lions to stage a comeback.

“We had a lot of opportunities, and honestly, these kids work their butts off everyday in practice, and games like this are what we practice for,” coach Kevin Clark said.

The Knights scored first with Aquinas Stillwell blocking a Lithia Springs field goal and taking it 80 yards with 4:30 left in the first quarter.

The 1st half onslaught continued, with a 15-yard Stillwell touchdown pass to senior wide out Alvin James, as well as a 4-yard rushing touchdown by senior running back Canaan Brant.

Junior wide receiver Nathaniel Wiggins opened scoring in the second half with his first of two touchdowns a minute into the third quarter on an under route, going 45 yards to the end zone. Grady led 28-7.

The Lions answered quickly after a 92-yard kick return by Deveon Jennings to set up first-and-goal at the 9-yard line. On third-and- goal, the Lions punched the ball in to cut the deficit to 28-14.

Lithia Springs recovered an onside kick and capitalized with a 20-yard touchdown run to pull closer at 28-21.

“The momentum changed on us when they got the onside kick and the long kick return,” Clark said.

The Knights answered with a 51-yard drive, capped by Brant’s second touchdown, as he stormed into the end zone on a 9-yard run.

“[The touchdown] was great, my o-line did a good job blocking, and however I can help this team win, I’ll do it,” Brant said.

The Lions continued to apply pressure after a receiver hauled in a jump-pass from the 8-yard line, followed by an 8-yard rush to even the score at 35-35 heading into the fourth quarter.

After a three-and-out by the Knights, the Lions took their first lead with 10:03 left in the fourth quarter on a 45-yard touchdown pass.

The Knights put themselves in a position to score, but after a fumble by Brant on second-and-goal with 3:57 left, the Lions recovered the ball and were prepared to close out the game.

Grady got a pivotal stop on its 46-yard line, forcing the Lions to punt with 1:38 left.

Starting its 30-yard line, Grady quarterback Stillwell found Trevion Snipes running a slant route for a 40-yard gain to the Lions 20-yard line. On the next play Stillwell found Wiggins on a jump-ball in the corner of the end zone, forcing the game into overtime.

The Knights started the overtime period from the 15-yard line, and although they couldn’t score a touchdown, senior kicker Reid Schratweiser nailed a 22-yard field goal, to put the team up 45-42.

Lithia Springs was set up nicely with third-and-short in its overtime drive. The Grady defense stuffed the Lions, forcing the Lions into a tough fourth-down decision.

The Lions went for a first down, but after a mishandled snap by the quarterback, the game ended with in a sack by linebacker Amari Little.

“I liked it because we fought the entire time,” Clark said. “When we were down all of a sudden, we came back in the fourth quarter, and we scored, and in overtime, we did what we did and actually won the game.”

“It was up and down,” Brant said. “We thought we had them in the first half, and we came out and kind of laid down thinking they weren’t going to fight back, and they did, so credit to them,” Brant said. “I’m just glad that our guys stuck through it, and we persevered, and that’s really the important part.”