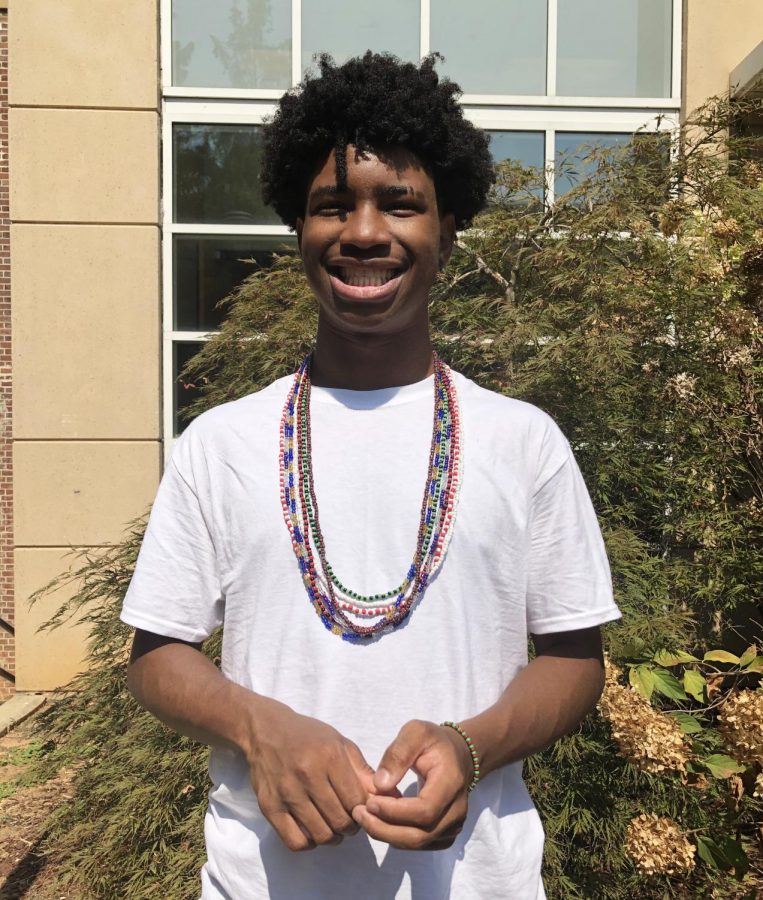 Junior Jeremiah Scott, who practices the African religion Ifa, wears his eleke beads around his neck which give him protection. Scott's beads mean life, protection, and his god, Oshun.

Junior Jeremiah Scott wakes up in the morning, takes a shower, then prays to Oshun and Eleggua. He puts on his elekes, sacred beads that he wears around his neck everyday, with his clothes for the day, then heads to school. Once the day is over, he prays again to his gods, removes his elekes, then goes to bed.

Scott practices a religion called Ifa, a system of divination that originated from the Yorùbá ethnic group from West Africa. Ifa is seen as a religion to some or a spiritual system to others.

“I look at Ifa as a way of life,” Scott said. “It brings positive energy to my life and everything I do, and it gives me discipline.”

Senior Amir Haslam also practices the religion. His mother is a priest, and when he was in  eighth grade, Haslam started practicing Ifa, which has impacted his life.

“It’s helped me make better decisions, and see aspects of life really differently,” Haslam said. “I feel like it has helped me mature a lot, too.”

When he first started practicing Ifa, Haslam was curious about the origins of the religion. He learned how the religion came about, and how it started to be practiced outside of West Africa.

“Ifa is a Nigerian religion,” said Haslam. “When Africans were brought to the Carribean from West Africa as slaves, they had to mix their religion with Christianity, and that’s how Ifa was created.”

In sixth grade, Scott’s cousin and stepdad urged him to learn about Ifa and to convert. Scott has been practicing Ifa since 2014. He has changed his habits and parts of his lifestyle to adhere to the practices of Ifa.

“I’ve had to change my ways a lot since I became Ifa,” Scott said. “I can’t eat pork, and I have to pray every night and every morning.”

Ifa has many gods called Orishas. Scott has two gods that he prays to: Oshun and Eleggua. In the religion, your god chooses you.

“When you first become Ifa, you have to do a reading, and that’s when your god chooses you based on your mindset,” Scott said. “People all channel different gods.”

Scott also takes pride in his elekes. Elekes can not be touched by anyone except for priests, and if they are touched, the person touching them must clean them. The beads all have different meanings and represent different divinities of Ifa.

“The elekes I have mean life, protection and one of them represents my god Oshun,” Scott said. “I look at my beads as spirits. If something bad is about to happen to me, they start to itch really bad. It’s like something is trying to tell me to leave or stop doing what I’m doing.”

Elekes must be removed at night, but people who practice Ifa also wear anklets, which can’t be taken off.

“My elekes are currently being retwisted, but I wear my anklet everyday, which serves the same purpose as the elekes —protection,” Haslam said.

Like Haslam, Scott has seen many improvements in his life after becoming Ifa. Ifa plays a big role in everything he does and has become a part of his identity.

“I’ve grown a lot since becoming Ifa,” Scott said. “I think before I do things, I have developed a much better temper. Ifa has opened my eyes to a lot.”