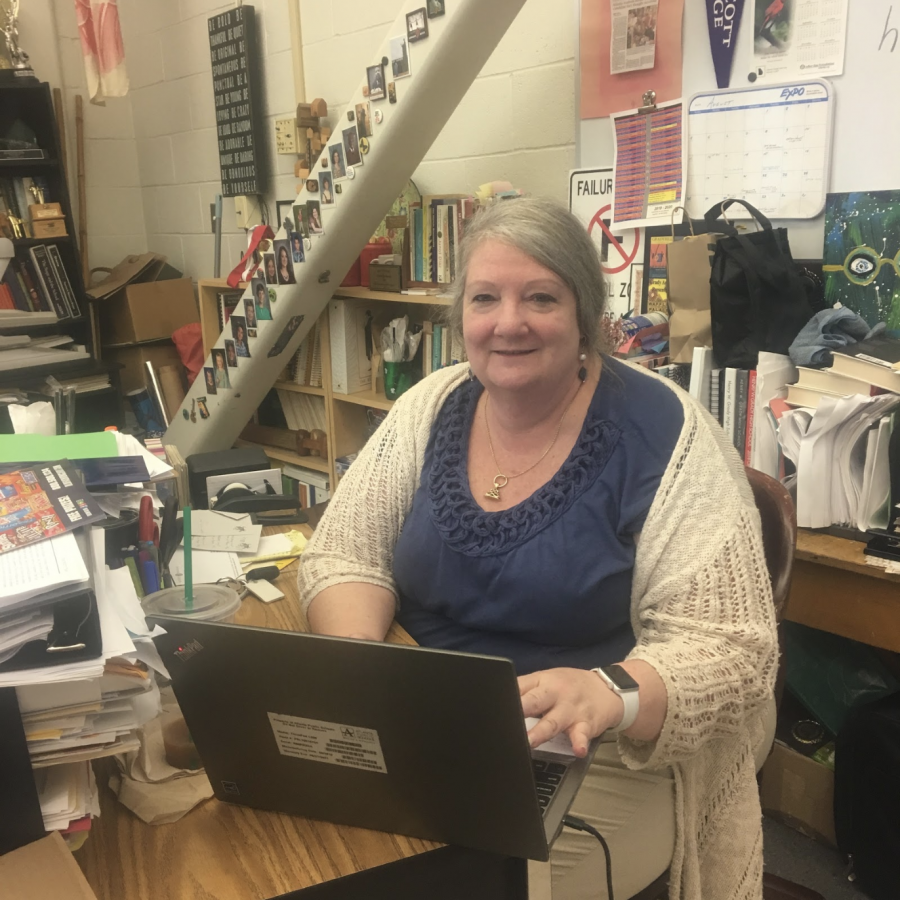 Lisa Willoughby, working during her planning period, in between teaching literature classes.

Lisa Willoughby, literature, drama and debate teacher, never anticipated this summer she would be diagnosed with a frightening disease: cancer.

After going through several bouts of exploratory surgery, Willoughby scheduled a postoperative meeting. The surgeries had seemingly gone smoothly, but her doctor had to review the findings before determining if there were any problems. At the postoperative, the doctor could more confidently present the findings.

An AP Language and Composition and American Literature teacher, Willoughby also works with the speech and debate team, and her devotion to coaching them led her to Dallas, Texas in June. Willoughby informed her doctor she would be at Nationals for speech and debate, and therefore, requested her post-op over the phone. She had no way to predict the news, so she patiently waited.

While at the competition, the date of the post-op arrived.

“When I called in, the nurse at the gynecologist said, ‘You’re going to have to come in for a meeting,’” Willoughby said. “At that point, I figured that the only reason they would have me come in was because I had to hear it from a ‘live human’ instead of hearing it on the phone.”

“I thought, ‘What’s the only thing they’re going to tell me?’ and I figured that it was going to be cancer,” Willoughby said.

Willoughby did what anyone in her situation would do and took to Google.

“So I had done what they say you shouldn’t do, which is to go on the Internet and read about what the potential things would be,” Willoughby said. “And that panicked me a little bit, but by the time I sat down with the doctor, I had informed myself enough that I felt pretty comfortable.”

June 23rd marked the day she was informed of the discovery, just a month and a half before the school year started.

She had initially hoped to get the procedure done before school started.

“When I first got the diagnosis, I thought that I would get the referral for the oncologist much quicker, and that I could actually have the surgery during the summer,” Willoughby said, “but that did not work out. There was like a three-week wait.”

Her surgery date was scheduled for later in the school year, so she had to prepare for her absence.

“I spent a fair amount of time with [literature teacher] Dr. (Rosemary) Fletcher and emailing with Ms. (Gayla) Blair and Ms. (Kate) Carter to plan how I would adapt things,” Willoughby said. “I talked to Mr. (John) Brandhorst and Mr. (Jake) Dreiling because it was going to have an effect on fall productions, and of course one of the first people I talked with was Mr. (Mario) Herrera, because I knew it was really going to have an impact on the speech and debate team.”

Despite the fear accompanied by the initial diagnosis, Willoughby wants to focus on making a change in her community through theater.

Willoughby has directed many plays throughout her many years at Grady. Productions in the past few years include “Working,” “W;T,” “Urinetown” and “The Winter’s Tale.” This year she wants to bring the problem of homophobia to light in the full length play “The Laramie Project: Ten Years Later”.

She is a little nervous about making the show a success.

“I’ve never done what I’m doing before, which is to audition and cast a show, get it started and then walk away for a month and trust that it will come back together,” Willoughby said.

Despite the challenges that may come with producing it, the message of the play is what she is focusing on. She wants to open the eyes of the public through acting.

“’The Laramie Project’ is something that we need to talk about now, not just about homophobia, but all kinds of hate crimes,” Willoughby said. “This summer, I heard about the murders of several trans individuals that were hate crimes. Also, there’s so much crime against African-Americans and against refugees from Central and South America… anti-semitic attacks — again inspired by hate.”

She wants it to resonate with the public.

“I think it’s worth our examining this issue of hate and how it can bring us to do things that we wouldn’t think humanly possible, and so I thought it was worth examining,” Willoughby said.

A diagnosis with cancer is something that no one wants to receive. Although Willoughby was frightened at first, she has decided to focus less on her prognosis and more on bringing awareness to hate in our society, and why it’s essential to stop it.

The time for recovery after the surgery varies, but she remains realistic and optimistic.

“At least four weeks, possibly six weeks, and some people have said similar surgeries, they have had to be out longer than that,” Willoughby said. “Worst case scenario, I’ll be back at the beginning of November.”