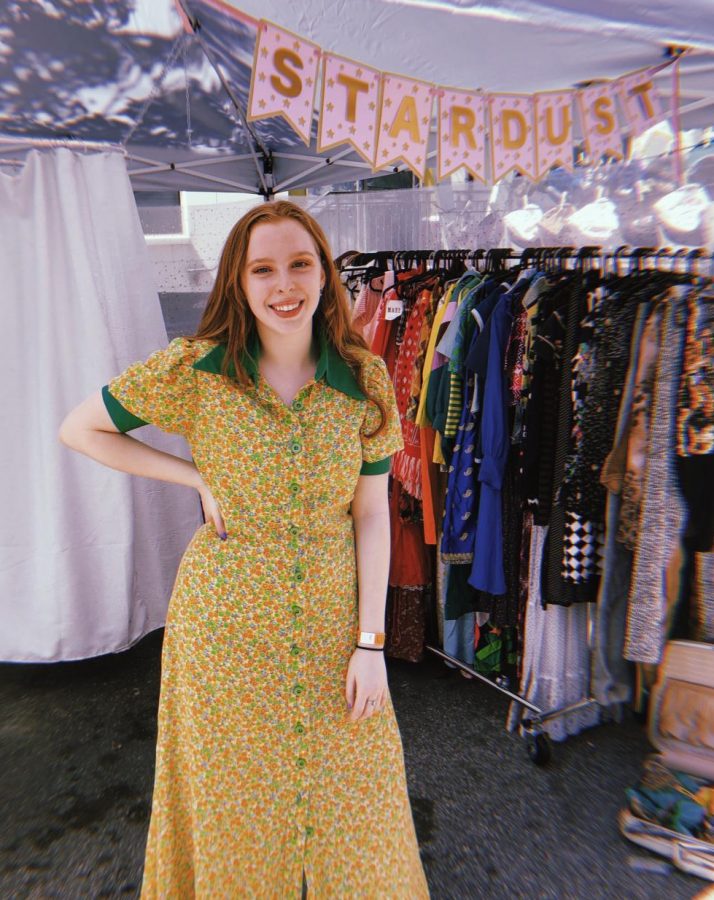 In addition to selling her vintage clothes online, Bella does local popups and festivals. Here, she poses in front of her booth at the Atlanta Fila Fest.

Bella Savignano always knew she wanted something different than most teenagers. Something nontraditional. Something ambitious. Something that seemed impossible. She didn’t know exactly what she wanted, but she knew it had to do with fashion.

“I came from a very casual family, and it always bothered me that my parents never wanted to dress up,” Bella said. “Neither of my parents really cared about fashion or clothing or anything like that.”

Bella, now 17, founded the online clothing store Stardust Vintage her sophomore year of high school. She prefers to pair her everyday outfits with vintage-style pumps — the complete opposite of her parents’ style.

“But they allowed me to pursue what I wanted,” Bella said.

After leaving Decatur high school to enroll in the George Washington University online school her sophomore year of high school, Bella was able to focus on starting and developing her own business: Stardust.

“Up until that point [starting online school], I thought any degree that was artistic would be a waste, and that it wasn’t realistic to have my own weird, quilted lifestyle of different roles and jobs, which is what I always wanted, and now pursue,” Bella said. From there, she pursued her dream of starting a store.

At first, Bella’s parents, David and Kim, didn’t think that leaving her traditional high school would be a smart long-term decision for their daughter. But like a true saleswoman, Bella constructed a PowerPoint to persuade her parents that it would be the right decision for her future. They were sold.

“The reality was she wasn’t challenged at school, and it wasn’t a very healthy place for her to be,” Kim Savignano said. “And the more I looked into these [online schools], the more I realized I was having this opinion based on my own sheltered views. I wasn’t really thinking outside of the box.”

She knew her daughter had never conformed to a “box” before. What was stopping her from exceeding outside of it now?

Online schooling gave Bella the time to rediscover herself and her love for fashion. She started by rooting through local thrift stores to find clothes to upcycle and sell. She reworked clothes — turning dresses into rompers and keeping scraps of fabric to use for future projects. But after she officially started Stardust in September of 2018, Bella really began to find her love for vintage clothes at estate sales.

“I’ve seen some pretty cool clothes [at estate sales],” Cottrell said. “All of them are really unique- it’s just a bunch of really cool stuff you could never find in any other store.”

To search for vintage items at estate sales, Bella works through endless closets of clothes and sometimes arrives hours early to snag a piece she’s had her eye on. She says she’s found herself in places hours from home to shop at these sales. But to Bella, the hours of searching, cleaning and mending, are worth it.

“My parents find it kind of morbid how much I enjoy going through people’s old stuff, but I see it in a different light,” Bella said. “I see it as a way to continue on someone’s life and giving their clothes a new home and a new person to live out a whole second life with.”

Bella also sells her clothes festivals around Atlanta. She has sold at booths at the Inman Parkfest and the Fila Fest. She also sells at a pop-up shop every month called Brother Moto in Cabbagetown.

Senior Nadia McGlynn discovered Stardust at the Inman Park festival in Virginia Highlands.
“Usually I don’t see things that I really want at those little clothing stands,” McGlynn said. “But then I saw Stardust.”
McGlynn especially liked a vintage 70’s Gunne Sax-style prairie dress. Bella bought this dress, along with a few other vintage prairie dresses, from an elderly woman at an estate sale a few weeks earlier.

“The dress that Nadia bought from me … had been sitting for a while because it was so small, and a lot of people that wanted it couldn’t fit it,” Bella said. “I remember [this clearly] because she was going to walk away from it, and I was like ‘Just try it on!’ She eventually came back for it and bought it. It was so exciting that someone finally appreciated it.”

McGlynn said she’s glad she bought from Stardust and that she’s considering wearing the dress to her senior prom.

“I didn’t feel guilty about spending money afterwards like I sometimes do after I buy something,” said McGlynn. “Bella was just so nice and welcoming, and what I really like is that she didn’t try to push it on me … like a lot of other vintage stores that are really overpriced and pushy.”

Junior Abby Edlein has also browsed at one of Stardust’s booths before. At the Inman Park festival, Edlein talked with Bella about a lot of her vintage pieces.

“She was super friendly when I walked up, and she let me try on a bunch of pieces” Edlein said. “She was just incredibly friendly, and you could tell she was super knowledgeable about vintage pieces. Stardust just had a lot of cool stuff that I’ve never seen before.”

Bella admits she has discovered some unconventional ways of finding vintage clothes, other than estate at sales.

“When I’m at concerts or something, and I see an older person who looks like they’re in the age range, I’ll ask them, ‘Do you still have your clothes from the 60’s?’”

She says that tactic hasn’t been too successful (or popular), but she likes to shake things up to find the perfect pieces for her collections to sell at her booths.

Now, after finishing schooling this summer, Bella graduated high school a year early at 17 years old, allowing her to take a gap year to focus on her business.

Next year, Bella will attend the Parsons School of Design in New York City. She said she’s excited to expose her business to the streets of New York.

“There’s going to be a ton of kids that want crazy, weird, unique clothes,” she told her parents, rationalizing her decision behind taking a gap year to grow her business before heading to the Big Apple. “I’m going to be next to New York University where they’re going to be making films and movies, and they’re going to want vintage for period pieces. I needed to capitalize on this.”

But relocating Stardust to New York poses a big challenge: a lack of space. Already notorious for cramped apartments and outrageously expensive rent, moving the business to New York will be a challenge. Bella is also in the midst of rebranding to avoid competition with another, larger company by the same name that has a physical storefront in Austin, Texas.

But her mother thinks Bella can make her business work no matter where she goes.

“Her whole life, Bella has done so much more than I even thought was possible, and so she always proves me wrong,” she said. “If she wants it bad enough, she’ll make it work.”