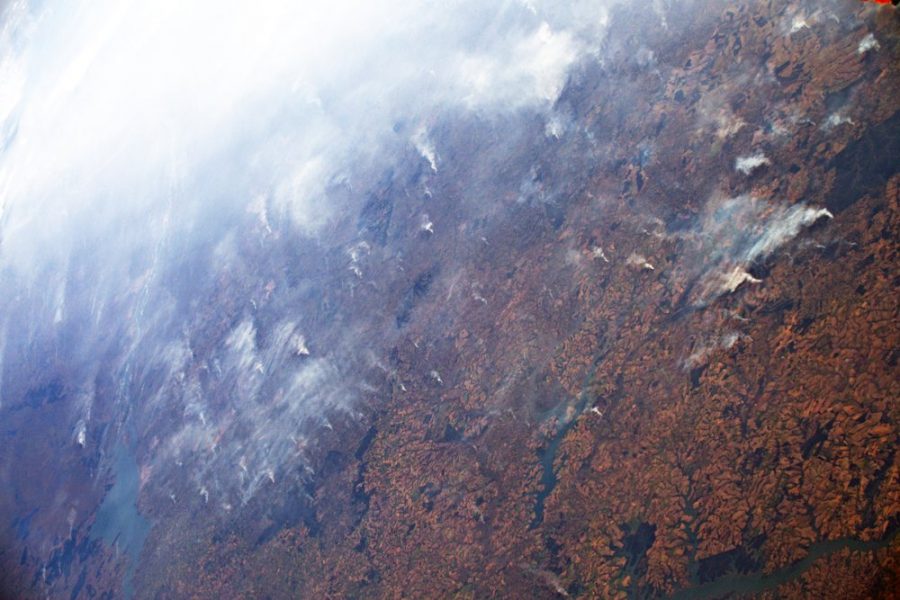 The Associate Press released this photo and captioned it, "In this handout satellite image released by NASA on Tuesday, Aug. 27, 2019 shows the fires in Brazil. The Group of Seven nations on Monday pledged tens of millions of dollars to help Amazon countries fight raging wildfires, even as Brazilian President Jair Bolsonaro accused rich countries of treating the region like a 'colony.'"

The fires in the Amazon Rainforest have sparked international attention. Different media outlets covered the issue with different emphases. Below are the leads and links to an assortment of media outlets with stories on the fires.

Fires across the Brazilian Amazon have sparked an international outcry for preservation of the world*s largest rainforest. Here’s a look at the role the Amazon plays in regulating the world’s climate:

IS THE WORLD’S OXYGEN SUPPLY AT RISK?

No. While it’s commonly said that the Amazon produces 20% of the world’s oxygen, climate scientists say that figure is wrong and the oxygen supply is not directly at risk in any case. That’s because forests, including the Amazon, absorb roughly the same amount of oxygen they produce. Plants do produce oxygen through photosynthesis, but they also absorb it to grow, as do animals and microbes.

Authorities from different parts of the world have used social networks to criticize Amazon firesand to warn of the risks of burning. Over the internet, they talked about the topic after the subject gained even more repercussion with the Twitter publication of French President Emmanuel Macron. In the post, in addition to summoning the G7 summit, he posted an image of the burning forest. Prime Minister of Canada – G7 country – Justin Trudeau endorsed Macron’s speech.

The raging fires in Brazil’s Amazon rainforest have captured the public’s imagination worldwide for the last few weeks and recently prompted the country to declare a state of emergency in the region.

The blazes, which are actually visible from space, are generally thought to be the result of land being cleared for farming and ranching, though Brazil’s president, Jair Bolsonaro, has claimed without evidence that the fires were started by nongovernmental organizations.

A record number of fires ravaging the Amazon has drawn international outrage because of the rainforest’s importance to the global environment and prompted Brazilian President Jair Bolsonaro to dispatch the military to assist in firefighting.

The Amazon – 60% of which is in Brazil – is the world’s largest tropical rainforest. It is considered a biodiversity hot spot, with many unique species of plants and animals.

The dense jungle absorbs a huge amount of the world’s carbon dioxide, a greenhouse gas believed to be the biggest factor in climate change, so scientists say that preserving the Amazon is vital to fighting global warming.

Brazilian President Jair Bolsonaro on Wednesday said he has accepted four planes from Chile to help fight Amazon fires, and he accused the French president of portraying himself as “the one and only person” concerned about the environment.

In criticizing French leader Emmanuel Macron, Bolsonaro extended a personal dispute that has, for now, sidelined a pledge of $20 million from the Group of 7 nations to help protect Amazon rainforest.