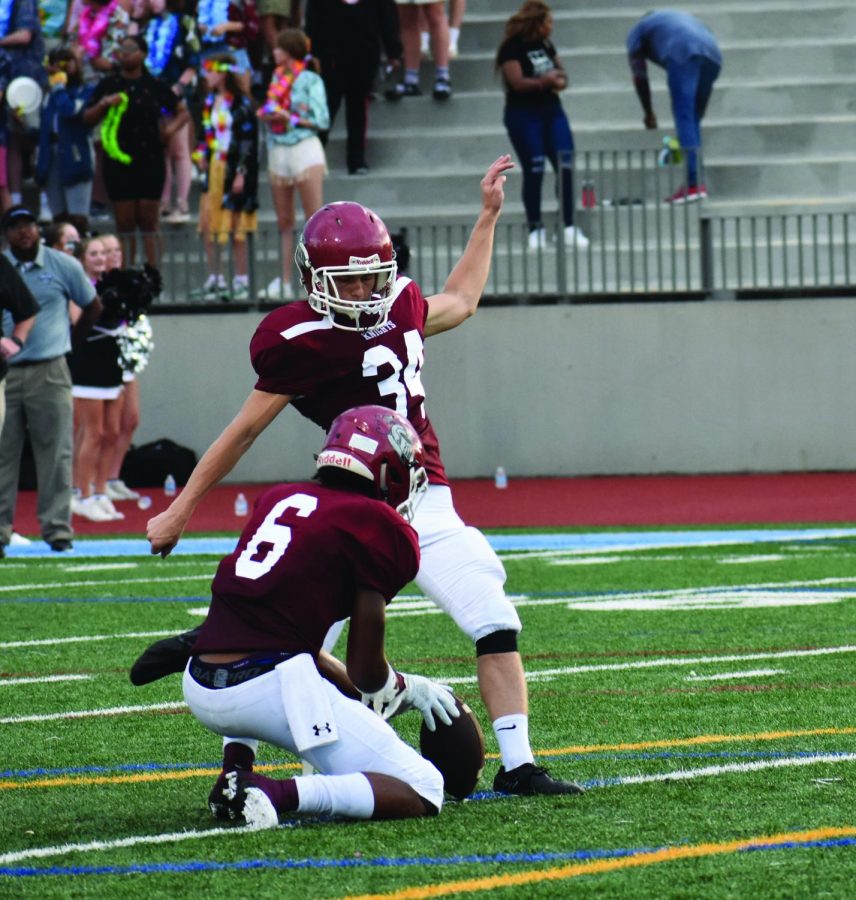 IT’S GOOD: Senior Reid Schratwieser prepares to kick a field goal against the North Atlanta Warriors on Friday Aug. 23. The Knights lost 40-19, but Schratwieser completed a 60 yard punt. Over the summer Schratwieser won two competitions at a kicking camp, coming home the Atlanta Champion and was invited to compete in the December national showcase in Austin Texas.

“10, 20, 30, 40, 48! And it’s good!” On June 2, senior Reid Schratwieser won the Golden Boot Award for kicking at a KickingWorld camp in Douglasville, Georgia. Schratwieser won two out of three competitions and came home as the Atlanta Champion.

“[The coaching staff] helped me with technique and my steps,” Schratwieser said. “It was about 30 kids, and the first day, we just worked on technique with kicking and punting, and the second day was competition day, and we did competitions in kickoffs, field goals and punts.”

The two-day kicking competition held at Chapel Hill High School featured some of the top high school kickers from Georgia and around the Southeast.

“They had two different age groups. They had ninth and tenth graders and then eleventh and twelfth graders,” Schratwieser said. “The older age group was pretty good, all average, I guess. It was good competition.”

In addition to winning the Golden Boot Award, he was also the Kickoff Competition winner, and was invited to participate in the December KickingWorld national showcase in Austin, Texas.

“It’s exciting. There is going to be like 200 college coaches there,” Schratwieser said. “I’m a little bit nervous. There are people who are already committed to D1 schools.”

After only becoming a kicker last year, Schratwieser attributes much of his success to his time as a soccer player.

“I kind of started off good because of soccer,” Schratweiser said. “They just had to teach me how to kick a football. I have gotten my technique much better and my distance much better.”

Despite how quickly he has improved, becoming a good kicker is not something that happens over night. In addition to the countless hours of practice after school and at camps, Schratwieser practiced often when no one was looking throughout the offseason.

“I practiced daily and in the off season to improve,” Schratwieser said. “That’s what it takes. Consistency, perseverance and passion for what you do. I hope it all pays off on the field with my team.”

On Aug. 16, the Knights played a scrimmage against the Northgate Vikings and lost 28-13. However, Schratwieser kicked a 47-yard field goal to score the Knights 3 points.

“To hit a 47-yarder, that’s pretty good,” head football coach Kevin Clark said. “A lot of professional kickers sometimes can’t kick 47-yarders, so he’s been doing a lot of good work in the offseason. He has gotten a lot stronger.”

Schratwieser’s newfound skill for kicking a football has led to high expectations of him this season.

“I think we always have a chance to score if we get inside the 30-yard line because he is pretty accurate, and you can definitely get three points on every possession if you get inside the 35-yard line. That’s big,” Clark said. “Three versus nothing, I’ll take three every time.”

Schratwieser’s improvements were noticed, not only by the coaches, but by his fellow teammates as well. A consistent kicker is a luxury many football teams don’t have, and the Knights know they can trust Schratwieser when it matters most.

Schratwieser and the Knights kicked off the regular season with a home game Aug. 23 against the North Atlanta Warriors. While the Knights lost 40-19, Schratwieser had a 60 yard punt to help the Knights. Their next game is set for Friday Aug. 30 against the Woodward Academy War Eagles.