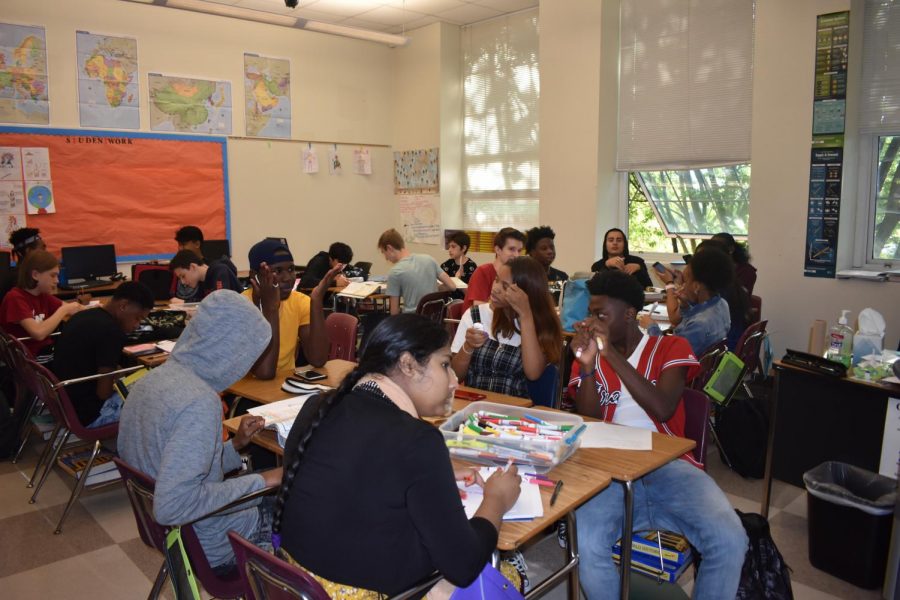 The first day of school came as a shock to many and not just because it marked the end of summer break. Talkative students filled the hallways as they slowly sauntered to class. Upon arrival, 30 pairs of eyes glanced up at the sound of the door, each student wondering how many more people the classroom could accommodate.

Students and teachers have noticed an obvious trend when comparing this year to the previous one: classes with more than 30 students.

“On average I have at least five to seven more kids per class this year,” said Tamela Cosby, a math teacher at Grady. “It makes me a bit more tired, having to deal with more children than I’m used to.”

Grady had roughly 1,360 students enrolled in the 2018-2019 school year. Last May, approximately 300 students graduated while over 400 students entered in the freshman class. Within a year, Grady’s population has grown to about 1,450 students.

Therefore, teachers have infused different teaching methods into the classroom to meet the needs of all students. Cosby intends to start using the computers more to allow the students who understand the lesson to keep learning, while she spends time helping others. However, students still feel that it is difficult to receive one-on-one instruction.

“The teacher can’t get to everyone as much,” said sophomore, Della Goines. “It’s more like they teach the class as a whole and not teach us as individuals.”

Larger classes also require teachers to use their classroom space more efficiently. With large numbers of desks, teachers struggle to determine the most effective way to arrange their classrooms.

Students have also recognized the issue of having too many people in such confined quarters. Goines has trouble navigating through the sea of desks, people, and students’ belongings.

“It makes the environment uncomfortable,” Goines said. “The desks are arranged strangely, and it’s difficult to move around without bumping into things or tripping. Plus, everyone is so close together, so our body heat, especially since we’re teenagers, makes the air feel sticky.”

The increase of students has generated a noisier class. Cosby notes she must discipline her on-level classes more than usual.

The Latin department has witnessed this problem with only two teachers at Grady this year compared to having three last year. This is a reason two separate Latin courses are taught during the same class period.

“The most advanced classes of Latin four and AP Latin are combined, which is not ideal, because there are 32 students and not everyone is learning the same material,” said Latin teacher Amy Leonard.

However, Leonard chooses to look on the bright side: so many more people want to take Latin. She considers the effort she puts into making her classes work as her contribution to the struggle that all the teachers have; accommodating the large number of students.

Although the larger class sizes may seem inconvenient, she mentions that class size is only one factor that influences classroom dynamics.

“In the end, I think it depends on the chemistry of the class,” Leonard said. “I had a class a few years ago with 32 students in it. It was my best behaved, highest achieving class. I had a class that had eight students in it in the same year, at the same level, that was miserable. They had terrible chemistry and weren’t motivated.”