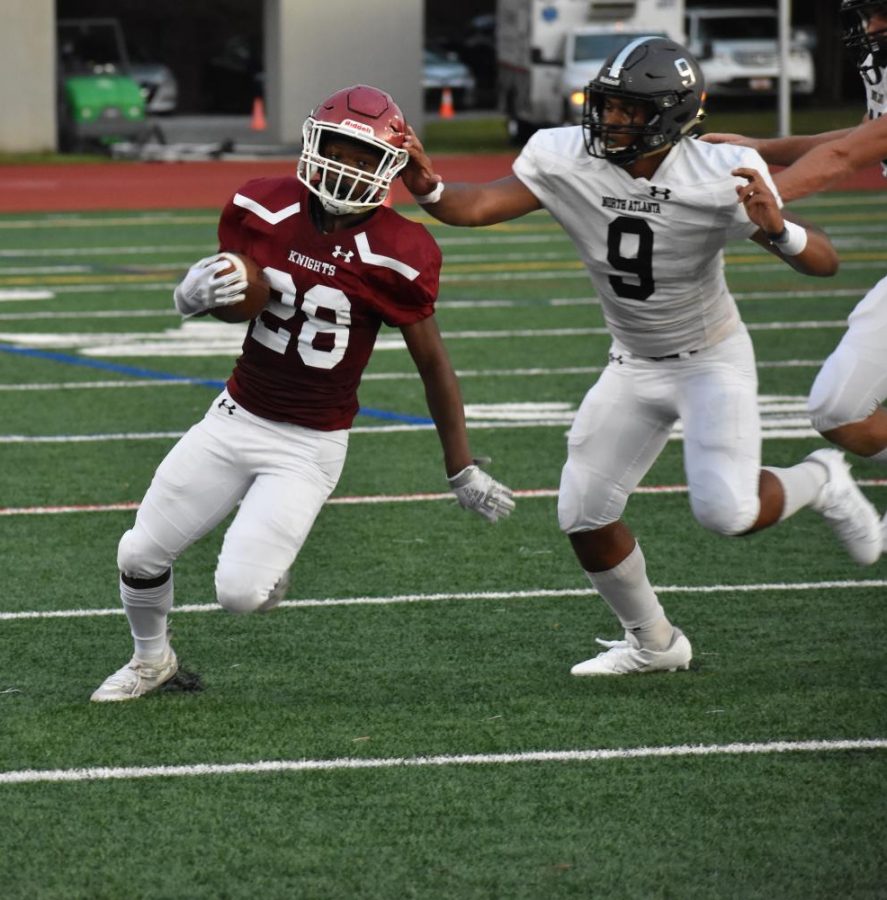 Freshman Jumal Prothro runs from the backfield as he is tracked down by a North Atlanta player. He gained about 6 yards on the play.

Two Grady ejections, including senior captain Alvin James, slowed down an offense that had scored on its first two drives of the first half.

The game started with a long drive from North Atlanta that ended in a blocked field goal, giving Grady the ball for the first time. Grady capitalized immediately with senior quarterback Aquinas Stillwell finding junior wide receiver Nathaniel Wiggins between the Warriors cornerback and safety. The Knights went ahead 6-0.

North Atlanta immediately responded as its running game came into full effect. Both Warriors running backs had 30-plus yard runs as senior running back T.K. Mack capped off the drive with an 8-yard touchdown run to tie the game at 6-6.

On their next drive, the Knights showed off their air theatrics again with Stillwell delivering another strike to Wiggins for a 40-yard touchdown pass. Grady led 13-6 with 1:48 left in the first quarter.

“He [Wiggins] helps us tremendously; you got a guy that pretty much can’t be covered,” Clark said. “He demands a double team which is going to leave some other guys open.”

Following the touchdown, Grady pinned the Warriors deep after the returner slipped during the run back. North Atlanta felt the Knights’ defensive pressure and fumbled an option pitch, giving Grady good field position. However, the Knights immediately gave the ball back after Stillwell was picked off by Warriors linebacker Davis Bell.

The Warriors converted the turnover as Mack scored his second touchdown on a 1- yard run with 7:20 left in the second quarter.

Both teams got the ball one more time before the half, but neither capitalized.

The second half started with a fight as James, a starting safety and starting receiver shoved a North Atlanta player, resulting in his ejection. The ejection of James paired with the ejection of linebacker and receiver Trevion Snipes greatly hurt the already shorthanded team.

“I think we have to be more disciplined, and not do things that will kick us in the butt,” said Clark.

The ejections hurt both sides of the ball as each player played both offense and defense.

“We’re already undermanned, and now, it’s like we’re losing four guys,” Clark said. “That hurt us on both sides of the ball, we couldn’t make adjustments.”

North Atlanta continued its running success as the Warriors capitalized on the two ejections. Mack got his third touchdown as the Warriors led 20-13 after a 2-point conversion.

Grady continued to hang on as Stillwell broke free for an 80-yard touchdown, bringing the Knights within a point at 20-19 with 5:34 left in the third quarter.

North Atlanta tacked on another touchdown to win 40-19 in a game marked by an undisciplined Grady team.

“We need to play as a team and not make stupid decisions,” Stillwell said. “We just lost discipline.”

However, the Knights showed improvements from last season and scored with multiple big plays.

“I think we’re a lot older; we had a bunch of babies playing last season,” Clark said. “I think we’ve gotten a lot stronger, which has contributed a lot to our success.”