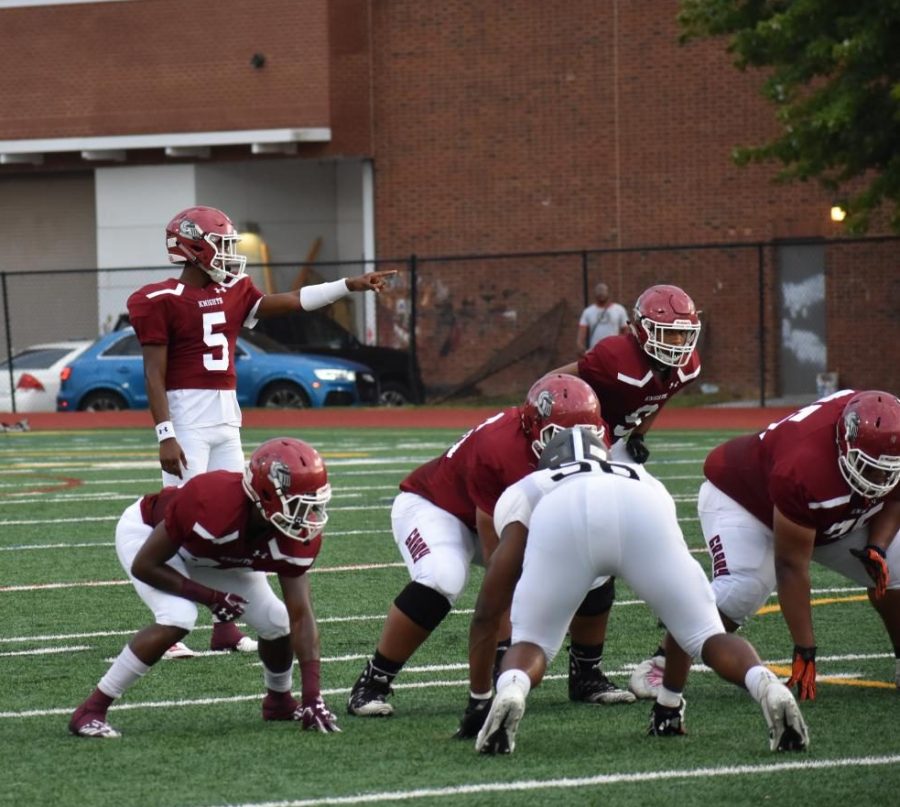 Senior quarterback Aquinas Stillwell calls out the defense before a play in the Knights loss to North Atlanta.

After one of its worst seasons in school history, the Grady football team will try to find its way back to its winning ways.

A 1-9 finish last year found the team sitting in last place in Region 6AAAAA and a long way away from the playoffs. However, a new team and some tweaking in the offseason has made postseason action seem possible again.

“The goal is to make the playoffs,” head coach Ryan Clark said. “We’ve done a lot of work in the offseason and we’ve gotten a lot stronger.”

The Knights are not planning on changing their style on the field, rather they are focused on improving execution.

“They actually understand our scheme, and what we are doing now,” Clark said. “We’re one year in, so I think we’ll be a lot more successful this year.”

The team has also seen an improvement in chemistry between the players.

“The effort and team chemistry both improved; we have a tighter bond this year,” junior wide receiver Nathaniel Wiggins said.

Players also feel like there has been an increase in trust between the players and the coaches.

With a new coaching staff arriving last year came big adjustments for the Knights. It wasn’t just the players who had to adapt to the changes, as the coaches had to learn about the players, too.

“This year they understand more of who can play what positions and who can go where,” James said.

Not only is the team’s chemistry improving, but the Knights have also had an influx of freshmen who will be key additions.

On the offensive side, the team has improved its line which will look to pave the way for freshman running back Jumal Prothro. Another key player will be Wiggins who has multiple offers from Division 1 schools and caught an 81 yard touchdown pass in the teams preseason scrimmage against Northgate last Friday.

After going back and forth between then juniors Aquinas Stillwell and Alvin James at quarterback last season, Stillwell will be taking most of the snaps in the first game against North Atlanta on Aug. 23.

On the defensive side, the Knights will look to continue to build, as Clark will continue to call the plays after adjusting to completely new players last season.

“One of the biggest things was that I had to learn about the kids, and the kids had to actually learn about me as well,” Clark said.

A speedy transition from Mays to Grady also hindered Clark from really getting to know his players, as chemistry has been an area of focus during the offseason.

“Last year I was halfway at Mays and halfway at Grady,” Clark said. “If I had been here in January then I would’ve been a lot more familiar with the kids.”

Overall the team will look to implement their newfound understanding of the playbook and team chemistry at Grady Stadium on Friday.

“It really comes down to working hard and doing the little things right, then we can make the playoffs,” James said.