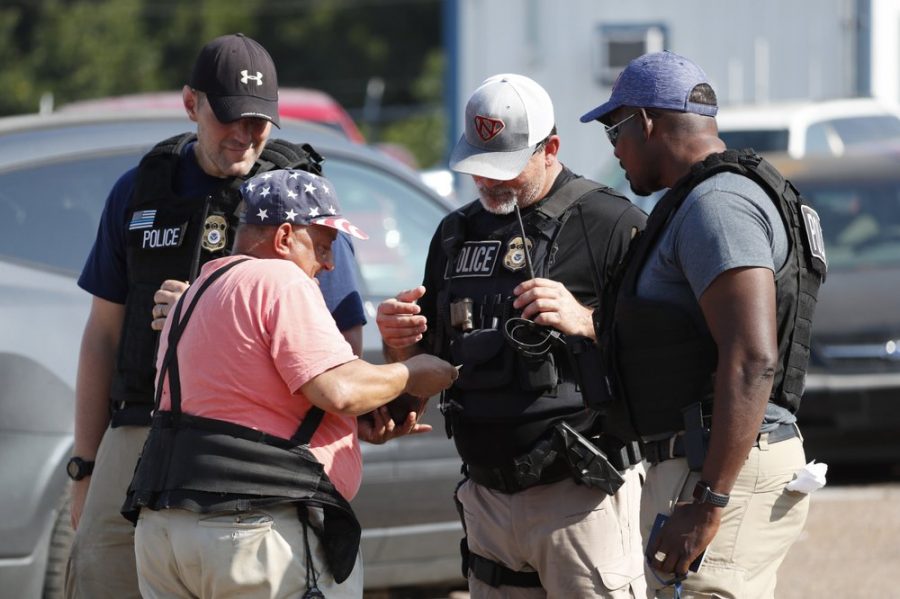 U.S. Immigration and Customs Enforcement (ICE) said Wednesday that its officers had raided seven food processing plants in Mississippi and detained approximately 680 “removable aliens” in what a federal prosecutor described as “the largest single-state immigration enforcement operation in our nation’s history.”

“The execution of federal search warrants today was simply about enforcing the rule of law in our state and throughout our great country,” U.S. Attorney Mike Hurst said in a statement. ” I commend these federal agents, our state and local law enforcement partners, and our federal prosecutors for their professionalism and dedication to ensure that those who violate our laws are held accountable.”

Federal agents raided several companies across Mississippi on Wednesday, rounding up hundreds of immigrant workers in what federal officials said might be the largest worksite enforcement action ever in a single state.

In a coordinated sting, more than 600 agents from Immigration and Customs Enforcement showed up at the sites with federal warrants that allowed them to search the premises. About 680 immigrants who were believed to be working without legal documentation were apprehended and taken away on buses.

Lindsay Williams, a spokesman for the agency, said the federal agents executed the search warrants in conjunction with the United States Attorney’s Office for the Southern District of Mississippi.

The raids, planned months ago, happened just hours before President Donald Trump was scheduled to visit El Paso, Texas, the majority-Latino city where a man linked to an online screed about a “Hispanic invasion” was charged in a shooting that left 22 people dead in the border city.

Workers filled three buses — two for men and one for women — at a Koch Foods Inc. plant in tiny Morton, 40 miles east of Jackson. They were taken to a military hangar to be processed for immigration violations. About 70 family, friends and residents waved goodbye and shouted, “Let them go! Let them go!” Later, two more buses arrived.

U.S. Immigration and Customs agents carried out the largest statewide workplace enforcement operation in U.S. history yesterday. It was a highly coordinated sting. Hundreds of agents surrounded seven food processing plants across Mississippi. About 680 employees, the majority of them Latino, were arrested and transported to a military hangar.

In addition to the arrests, agents also seized company business records. At a press conference yesterday, Mike Hurst, U.S. attorney for the Southern District of Mississippi, said this about the operation.

The raids, planned months ago, happened just hours before President Donald Trump visited El Paso, Texas, the majority-Latino border city where a man linked to an online screed about a “Hispanic invasion” was charged in a shooting that left 22 people dead.

HOUSTON (AP) — The images of children crying after their parents were arrested in a massive immigration raid in Mississippi revived a longstanding complaint: Unauthorized workers are jailed or deported, while the managers and business owners who profit from their labor often go unprosecuted.

Under President Donald Trump, the number of business owners and managers who face criminal charges for employing unauthorized workers has stayed almost the same, even as almost every other enforcement measure has surged.