the Southerner Online • May 20, 2019 • https://thesoutherneronline.com/71797/news/robotics-member-wins-deans-list-award/ 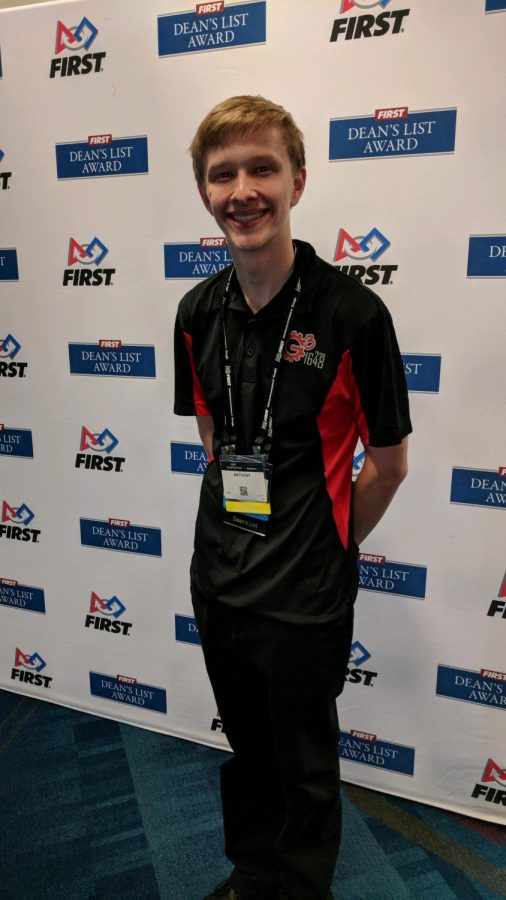 Junior Anthony Cochran won the Dean's List award for leadership and community outreach at a state tournament and was honored at the FIRST World tournament in Houston, Texas. Other team members traveled to the tournament with Cochran.

At a luncheon in a packed conference center in Houston, Texas, FIRST Robotics recognized junior Anthony Cochran for an award he’s coveted “since ninth grade.”

Cochran, a member of the robotics team, earned the Dean’s List award at the state robotics competition last month. The award celebrates “outstanding student leaders whose passion … attaining FIRST ideals is exemplary,” according to FIRST. FIRST is a not-for-profit public charity that organizes events to promote youth involvement in robotics.

“I’m just so happy that I could take that nomination up to the national level because I definitely would not be the person I am without this team,” Cochran said.

Cochran won the award for his efforts to help the team and his community. He helped operate the Drones for Good program, which was founded by the robotics team four years ago to educate middle schoolers.

Last semester, he founded SySTEMic Change to encourage students to explore interests otherwise foreign to them. While not currently operational, he plans to restart the organization in the fall.

Since winning the Dean’s Award, he has been selected as a Georgia FIRST CTSO State Officer.

“I keep thinking about how lucky I am,” Cochran said.

Cochran’s accomplishment allowed him and a few other team members to attend the World FIRST tournament in Houston. They volunteered at the tournament, mostly helping with crowd control.

“Having people I know there and who I could share the experience with was definitely a huge plus,” said Cochran, who enjoyed exploring Houston with his teammates.

Junior Evelyn Craven, the electrical lead, attended the tournament. She met former MIT professor and Distinguished Advisor to FIRST Dr. Woodie Flowers, “a robotics celebrity if you will,” and was proud to see a Georgia team win one of the events. Team captain Cate Crutcher said she enjoyed seeing the FIRST Lego League competition and stocking up on free Vitamin Water offered to volunteers.

However, the experience was different for robotics team members, who were accustomed to competing. This was the first time in four years the entire robotics team did not qualify to compete with the robot they had built throughout the spring, and some team members attributed their loss to a sudden dissolution of leadership.

The team’s head coach of 14 years, Andrew Nichols, resigned. Another coach, Luke Esposito moved away, and another, William Melton, left. Some of the teams’ mentors also left.

“With [Nichols], all of his knowledge left, too; so we’ve just been figuring things out all year,” junior and team captain Cate Crutcher said.

According to Craven, the team took a less comfortable route in building its robot for competition. While less competitive, she said building it taught the team more about control and design theory.

Crutcher also pointed to this year as a period of growth for the team and said that “right now, we have the best team we’ve ever had.” Cochran, Crutcher, and Craven are positive the team will qualify for the World tournament next year.

Cochran anticipates his commitment to the team next year and says he already knows he will be sad to leave. He said the team “has really become a part of [him]” and that it will be “really hard to say goodbye.”

“I certainly hope I’ve brought as much to this team as this team has brought to me,” Cochran said.