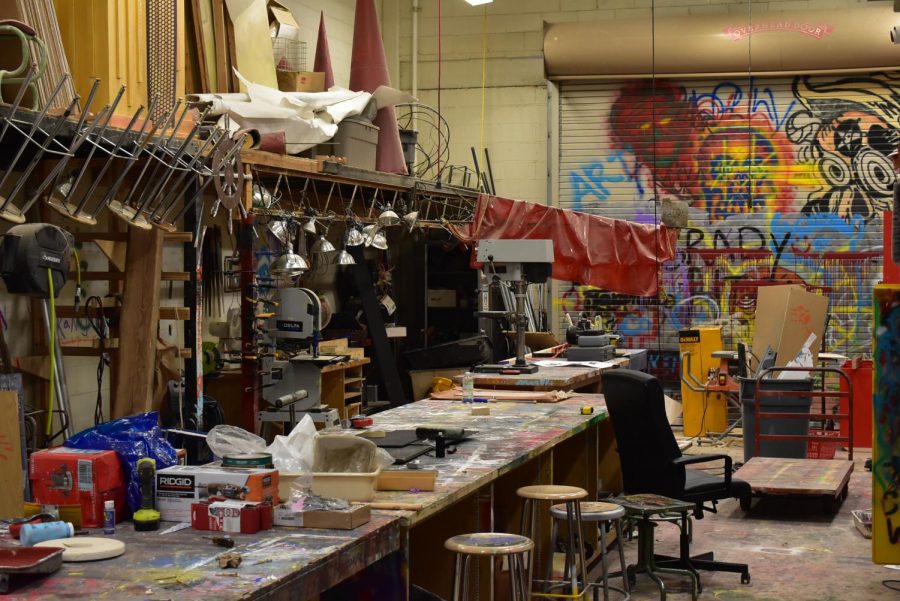 A recent burglary spurred an outpouring of support from the Grady community.

In its wake, nearly every power tool was stolen from the scene shop. The shop is the art room where sets for plays and other productions are constructed.

John Brandhorst, AP Studio Art and Painting and Drawing teacher who oversees the shop, said the suspect was caught on camera.

“According to the video … it was right about 10:30 or 10:40 at night, and it looks like there’s a single, middle- aged man,” Brandhorst said. “He came around the back of the building and checked every single door… pulling on every single door he could.”

According to Brandhorst, the suspect happened to find an open door near the front of the building. He then proceeded to attempt to open other doors in the music hall and eventually entered through the shop’s slightly ajar door.

The loss of the tool collection hit Brandhorst particularly hard.

“I have been building it [the collection] for 20 years,” Brandhorst said. “Adding everything up at Home Depot based on retail prices, it was about $4,200.”

The community has pitched in to assist in replacing the stolen tools.

“There was an immediate response when people learned that there was a big theft,” Brandhorst said. “All of a sudden, all kinds of folks were calling, saying, ‘what can we do?’ and so I put out the list of missing objects … and Jennifer Pye (a Grady parent) did a gift registry.”

Theater teacher Jake Dreiling was affected as well since many of his productions require the use of large set pieces. He works in the scene shop often.

“We realize that it is a matter of having our stuff secure, no matter how secure the rest of the school is,” Dreiling said.

Grady has not experienced a theft of this scale for several years, especially in the scene shop.

“This was a very unfortunate blip in a very safe and awesome system we have going in terms of these tools,” Dreiling said.

New safety regulations may soon be in place.

“As a response to this, we are obliged to create some kind of cage, some kind of new system,” Brandhorst said. “Doors have to be checked differently; there has to be heightened security.”

Brandhorst hopes the theft will speed the process of getting doors near the scene shop fixed.

“There’s a certain priority list and a certain amount of time, and for some reason, they just don’t make it onto the list,” Brandhorst said. “There’s a school renovation… and this will be sure to be a new point.”

Brandhorst was initially skeptical of how the scene shop would bounce back from this blow, but he has found new hope from the recent community outpouring. As the registry continues to be added to, the future looks bright.

“There’s been an overwhelming, incredibly generous response from a lot of people, so we’re going to be just fine,” Brandhorst said.